Felipe Ramos, Sr. Family History
A Documented Research Report by Bob Wirt
Version 1, May 13, 2012
Note: This report has an added a feature that lets you easily see associated documents. When the text refers to an event (e.g., a death) for which an associated document is available, a link will be provided to that document. If you see a word or words in bold text and underlined, just  click on it. For example, in the first paragraph you will see "He died in Brewster Memorial Hospital". Click on "died" to see the death record (and in this case, also the obituary). To return to the main report, simply click the back arrow (usually in the upper left of your computer screen).

Please use the form at the bottom to share your comments on this report.
Felipe Ramos, Sr. was born May 1, 1894 in Ojinaga, Mexico, the son of Angel Ramos and Alvina Madrid. He immigrated to the United States in 1900 and settled in the Terlingua area. In 1910 Felipe became a U.S. Citizen. Until about 1938 he worked for the Chisos Mining Company (employee #257) and possibly other mines in the area, primarily as a hoist mechanic. In December 1934 he was working at the Chisos Mining Company’s coal mine when his hand and finger were cut by a rock fall. The injury was not serious and he did not miss any work time.

Felipe was still in Terlingua in January 1938, but probably moved to Shafter soon afterward. He was living in Shafter in 1940, but by the end of that year he had moved to Alpine. He died in Brewster Memorial Hospital, Alpine of an intestinal obstruction October 17, 1971 and is buried in Holy Angels Cemetery.     Felipe’s first wife was Ramona Cataño, born circa 1891 in Texas. On February 17, 1906 they were married in Terlingua by Justice of the Peace A.J. Humphries. Ramona died probably in 1916. Soon afterward Felipe married Eulalia Flores. She was born February 12, 1900 in Mexico, the daughter of Marcelino Flores and Apolonia Mireles. Eulalia died of uremia in Alpine March 19, 1963 and is buried in Holy Angels Cemetery 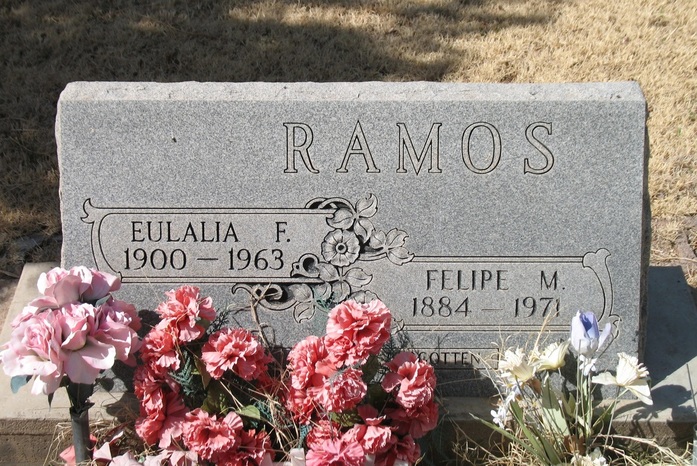 1.    Son Celestino Ramos was born April 6, 1907 in the Terlingua area. He was baptized in Big Bend (Study Butte area) April 30, 1907 by Father Brocardus. His godparents were Paz Molinar and Maria Burgess.

2.    Daughter Alvina Ramos was born September 5, 1909 in the Terlingua area. She was baptized in Chisos November 3, 1909 by Father Brocardus. (Her baptism record indicates she was a boy). Her godparents were Daniel White and his sister Norberta White. Alvina married Jesus Martinez. He was born circa 1897 in the state of Durango, and in 1935 was working in a coal mine in the Terlingua area. Alvina was living in Oakland, California in October 1971. She was deceased by June 2009. Alvina and Jesus had one child:

A.   Daughter Anita Martinez was born in Terlingua July 26, 1935. Her birth was attended by midwife Inez Cisneros.

3.   Son Arcadio Ramos was born in Terlingua September 11, 1911. He worked for the Chisos Mining Company, employee #912, at least from October 1933 to July 1937. On February 25, 1935 his foot was broken by a falling rock. He missed work for several weeks as a result. On July 15, 1937, while working in the Chisos Mining Company coal mine, his right shoulder was injured when coal fell from a bucket above him. Arcadio died of bronchial pneumonia in Big Spring State Hospital, where he had been a patient for nearly five months. He is buried in Holy Angels Cemetery, Alpine. Arcadio never married. 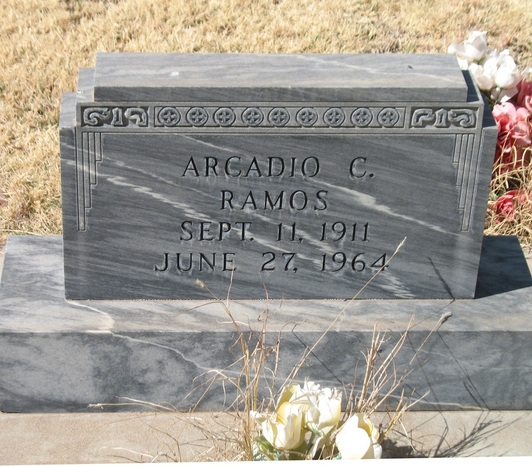 On January 31, 1936 Felipe, Jr. and Eusebia Cardenas were married in Terlingua by Justice of the Peace Robert L. Cartledge. They had four children:

B.   Daughter Enedina Ramos was born November 16, 1940 in Presidio County.

5.    Enrique Ramos was born in Terlingua February 20, 1915. He married Micaela Macias in Brewster County December 25, 1937. She was born in Terlingua September 29, 1912, the daughter of Benjamin Macias and Nicolasa Levario. (See http://www.lifebeforetheruins.com/juan-macias-1.html for more information on the Macias family). Enrique was working for the Chisos Mining Company in June, 1934. Micaela and Enrique were living in Alpine in 1943, but soon afterward moved to El Paso. By October 1971 they were living in Fresno, California. They both died there, Enrique on July 31, 2000 and Micaela on January 6, 2001. They had six children:

D.   Daughter Estella Ramos was born January 5, 1945 in El Paso. She married Raymond R. Contreras September 29, 1960 in Fresno and they were still living there in February 2012.

6.    Son Juan Cataño Ramos was born May 6, 1916 in Terlingua. He was baptized in Chisos June 6, 1916 by Father M. Cuadrado. His godparents were Felipe Villalba and Cruz Moreno. Juan worked for the Chisos Mining Company in 1937, then served in the U.S. Army during World War II and later worked for Big Bend National Park.

On March 23, 1937, while working at the Chisos Mining Company’s coal mine, Juan was badly burned. The gasoline engine he was priming back fired, badly burning a hand and the front of his body. Chisos Mining Company physician Dr. Miller treated Juan at the mine the morning of the accident, but he missed work for 18 days.

On November 21, 1936 Juan and Jesus White were married in Terlingua by Justice of the Peace Robert L. Cartledge. Jesus was born in Terlingua October 19, 1919, the daughter of John White and Cruz Moreno. Later the couple settled in Alpine, where Jesus owned and operated the Alamo Café and then the La Casita Restaurant. Jesus died at her residence in Alpine July 2, 1992. Juan died in Fort Stockton December 2, 2002. Both are buried in Holy Angels Cemetery. Juan was buried with full military honors.

Juan and Jesus had seven children:

G..   Daughter Elva Ramos was living in Fort Stockton in July 1992 and in Alpine in December 2002. Her married name is Rodriguez. 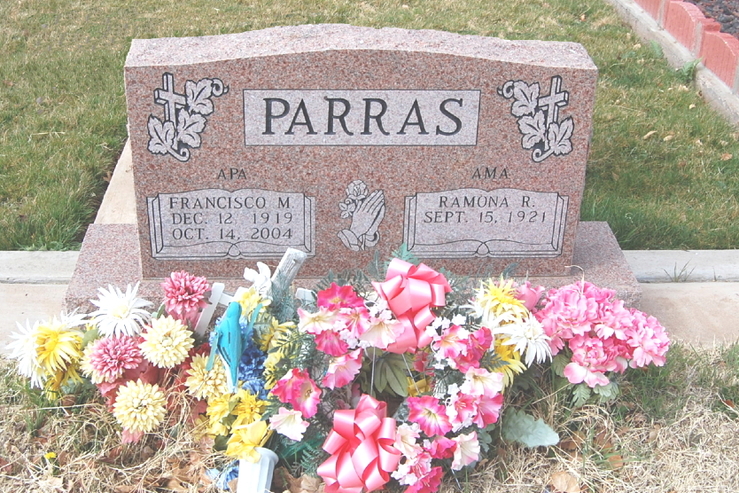 3.  Daughter Eulalia Ramos was born February 12, 1924 in Terlingua. She married Daniel Villalba Portillo January 28, 1946 in Brewster County. Eulalia died June 27, 2009 in Fort Stockton and is buried in Holy Angels Cemetery. Daniel was living in Alpine in June 2009.
Eulalia and Daniel had seven children, all born in Brewster County:

A.   Daughter Margarita “Margie” Portillo was born December 16, 1947. Her married name is Ramirez and in June 2009 she was living in Fort Stockton.

C.   Daughter Adelina Portillo was born March 3, 1951. Her married name is Sanchez and in June 2009 she was living in Presidio.

E.   Daughter Anna Maria Portillo was born January 1, 1960. Her married name is Chavez and in June 2009 she was living in Alpine. 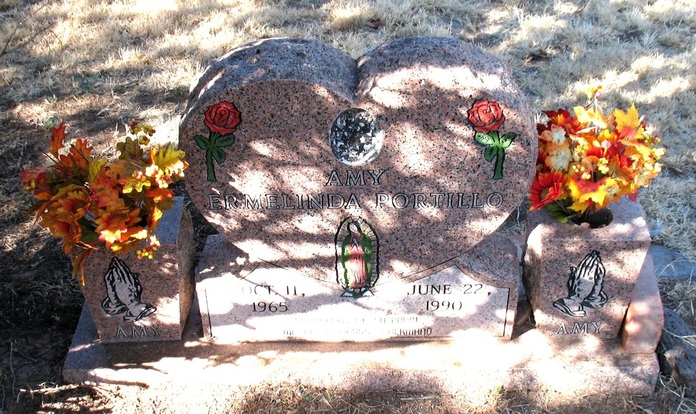 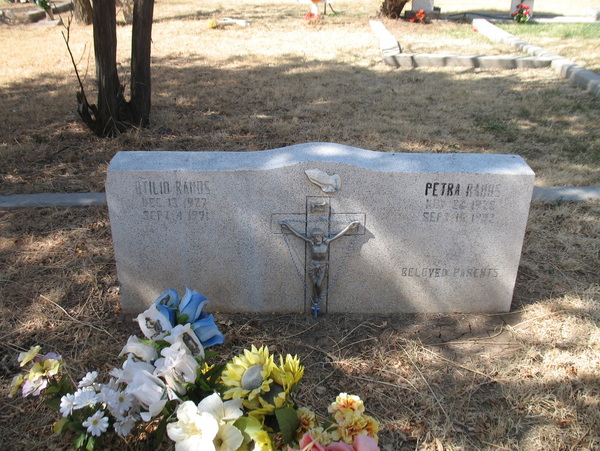 Otilio and Petra had three children:

7.    Son Perfecto Ramos was born April 18, 1933 in Terlingua. He died of gastro enteritis in Terlingua October 31, 1933 and was buried in the Terlingua Cemetery the following day.

8.    Daughter Manuela Ramos was born June 16, 1935 in Terlingua. Her birth was attended by Midwife Severa Chavez. She married Benito Aranda Cobos, Jr., son of Benito Cobos and Elvira Aranda. They were living in Alpine in June 2009. Manuela and Benito had seven children, all born in Brewster County:

10.    Daughter Pabla Ramos was born in Terlingua January 26, 1938. Her birth was attended by Chisos Mining Company physician Dr. J.K. Miller. Her married name is Muniz and in June 2009 she was living in Odessa.

State Birth Index and Death Index records, accessed via FamilySearch, an on-line research tool provided by the Church of the Latter Day Saints.

Baptism records from St. Agnes Catholic Church in Terlingua, provided on microfilm by the Church of the Latter Day Saints.

Copyright 2012 by Bob Wirt; all rights reserved.
This work may not be copied or used in whole or part for publication without the written consent of the author.
Individuals may use this information freely to develop and maintain family histories for their personal use.