Services are scheduled 10 a.m. Monday at Grace Fellowship in Monahans with Mark Bristow officiating. Arrangements are by Harkey Funeral Home.

He was born in Marathon. He worked for Mitchell's Thriftmart & State School.

He was born in Castolon and was a retired employee of Jones Bros. Dirt and Paving after 37 years. He was a Catholic
.
Visitations will be held Wednesday, Jan. 12, 2011, 9 a.m. to 9 p.m. A rosary will be said Wednesday, Jan. 12, 2011 7 p.m. at Martinez-Smith Funeral Chapels. Funeral Services are scheduled at 2 p.m. Thursday, Jan. 13, 2011 at St. Mary's Catholic Church. Burial will follow at Ector County Cemetery (Rose Hill) with Father Santiago Udayar officiating.

Services under the direction of Martinez-Smith Funeral Chapels.

Mass will be celebrated at 10 a.m. today at St. Joseph Catholic Church with the Rev. Luis Cepeda officiating. Graveside services will be at 1  p.m. at City of Monahans Cemetery. Arrangements by Martinez Funeral Home.

He was born in Lajitas.

Mrs. Sotelo was born in Hot Springs, Texas, on March 20, 1917. She married Victor M. Sotelo, Jr. in 1942 in Terlingua. During their marriage, the couple lived in Marathon, Fort Stockton and Monahans, and in Abilene for 27 years.

She was born in Glen Springs. She was Catholic.

Arrangements were under the direction of Odessa Funeral Home.

Julian Granado Baiza, age 86, of Belton, Texas, passed away on May 7, 2010 in Belton, Texas. He was born in Terlingua, Texas on June 26, 1923 to Candelario Baiza and Albina Granado. A memorial service was held Saturday May 15, 2010 at Memorial Funeral Home Chapel at 2:00 PM in Fort Stockton, Texas.
He is preceded in death by: Spouse, Josephine Sotelo Baiza, parents, Candelario and Albina Baiza, great great granddaughter, Iris Nichole Baiza, brothers, Valentine Baiza, Manuel Baiza and Luis Baiza, and sisters, Francisca Gomez and Catarina Baiza. 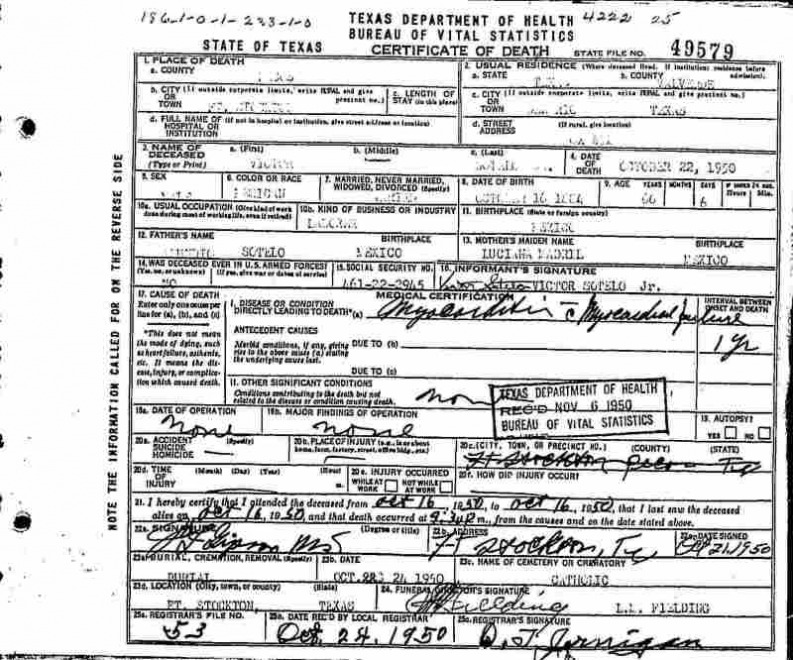 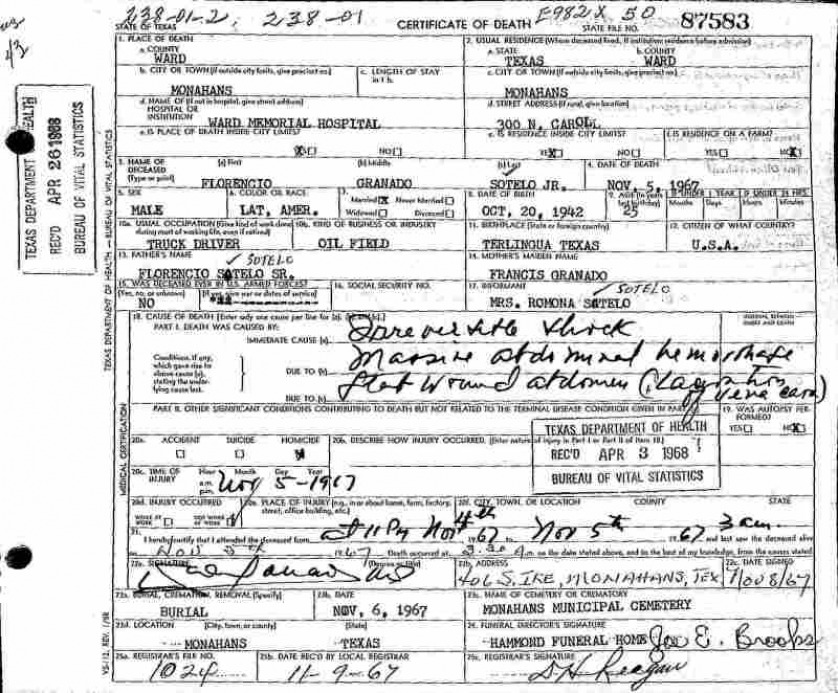