Many of the Mexican families who settled in the Lower Big Bend Region were very mobile. The Victor Sotelo family is a good example; they lived in several different areas and engaged in a variety of work to earn income. During the 30 years that this family lived in the Lower Big Bend area, they lived in Lajitas, the Marascal Mine area, Glenn Spring, McKinney Springs, El Ojito and La Coyota, and Victor worked as a mine laborer, a laborer at a candelilla wax factory, and a farmer.

Victor Sotelo Sr. was born in San Carlos, Chihuahua, Mexico October 16, 1884 and immigrated to the United States in 1910. He was the son of Abundio Sotelo and Luciana Madrid. In 1916 he married Guadalupe Moreno in a civil ceremony. Their “church” wedding was July 22, 1922 at “Mina del 34”, referring to the Mariscal Mine area. The ceremony was performed by Father Max Weyert from St. Agnes Church in Terlingua and the witnesses were Ambrosio and Rosa Santiago. Guadalupe was born in Punta del Agua, Chihuahua, Mexico in 1896, the daughter of Francisco Moreno and Juana Cabello. Victor and Guadalupe settled initially in the Lajitas, Texas area, where their first child was born.
In December 1917 Victor sold a small amount of fuel wood to the Study Butte Mining Company. Probably shortly thereafter he moved his family to the Mariscal area; he was working at the Mariscal Mine in 1920 (a). Soon after the Mariscal Mine closed in 1927, Victor moved his family to Glenn Springs, apparently attracted by job opportunities in the candelillia wax industry in that area. By 1930 the family had moved again, this time to an area along the Rio Grande River near Johnson’s Ranch. At that time Victor was working as a farm laborer. The family subsequently lived for a short time in the village of El Oito, about a mile downriver from Castolon, and later in La Coyota, about two miles upriver from Castolon. Two of the Sotelo children attended the Castolon School in 1932-1933. The family was still living in La Coyota in May, 1940.

While living in the Castolon-La Coyota area Victor worked as a farm laborer for the La Harmonia Company in Castolon. In 1939 he and three sons were working as farm laborers. Combined they had a family income of $1605.00, which was quite substantial for the time and place.

Victor eventually moved to Del Rio, Texas and was a resident of that town when he died in 1950. He died of heart failure in Fort Stockton, Texas on October 22, 1950 and was buried in Fort Stockton two days later. Victor’s wife Guadalupe died in Ward County, Texas (probably Monahans) on February 16, 1979.

Victor and Guadalupe had eleven children:
1.      Florencio Sotelo, Sr. was born in Lajitas, Texas on November 15th, 1916. He was living with his parents along the Rio Grande River in 1930. On May 11th, 1938 he married Francisca Granado in Terlingua, Texas. They were married by Justice of the Peace Robert L. Cartledge. Francisca was the daughter of Sostenes Granado and Trinidad Sanchez. Florencio died in Dallas, Texas on January 10th 1999 and was buried in the City Cemetery, Monahans, Texas. In November, 2004 Francisca was living in Bakersfield, California. 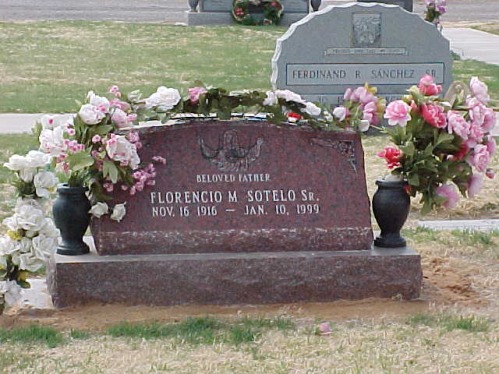 B.   Son Florencio Sotelo, Jr. was born on October 20, 1942 in Terlingua, Texas, In November, 1967 he was living in Monahans, Texas and was employed as a truck driver in the oil fields. He died in Ward Memorial Hospital in Monahans on November 5, 1967 of irreversible shock due to massive internal hemorrhage. He was buried in Monahans Municipal Cemetery on November 6, 1967.

Margarito married Antonia Samaniego, the daughter of Antonio Samaniego and Flora Galindo. She was born in Terlingua November 28, 1916. Margarito died in Monahans October 23, 1985 and Antonia died there February 12, 1995. They had three children:

C.   Daughter Elizabeth R. Sotelo was born September 23, 1964 in Val Verde County.
3.    Son Victor Sotelo, Jr. was born in McKinney Springs, Texas September 17, 1921 and was living with his parents along the Rio Grande River in 1930. He was a student at the Castolon School during the 1932-1933 school year. In May 1940 he was working as a farm laborer and was living with his parents in La Coyota. He married Maria Granado February 7, 1942 in Terlingua. She was born in Hot Springs, Texas on March 20, 1917, the daughter of Sostenes Granado and Trinidad Sanchez (and the sister of brother Florencio’s wife Francisca). Victor died in 1994 and was buried in Elmwood Memorial Park in Abilene, Texas. Maria died in Abilene on August 29, 2004 and was buried in Elmwood Memorial Park on September 1, 2004. Victor and Maria had five children:
A.   Daughter Eulalia Sotelo was born September 18, 1942 in Brewster County.

B.   Daughter Guadalupe Sotelo was born in Brewster County on November 7, 1943. In August 2011 she was living in Abilene, Texas. Her married name is Box.

C.   Son Alberto Sotelo was born in Marathon, Texas on February 15, 1946. Later he lived in Monahans, Texas, where he worked for Mitchell’s Thriftway and State School. Alberto married Esperanza Bernard. She was born January 20, 1944, the daughter of Francisco Bernard and Juliana Holguin. (For more information on the Bernard family, see http://www.lifebeforetheruins.com/henry-bernard.html). Alberto died in Monahans August 11, 2011.Esperanza was still living in Monahans at the time of his death. They had three children:
(1).    Son Albert Ray Sotelo, Jr. was born October 21, 1962 in Monahans and was living there in August 2011.

(2).    Daughter Sylvia Sotelo was born in Monahans November 10, 1963 and was living there in August 2011. She married Bobby Almanza, the son of Antonio Almanza and Beta Garcia and the grandson of Jesus Garcia and Mariana Oliveres. Sylvia and Bobby had four children. For details and more information on the Garcia family, see http://www.lifebeforetheruins.com/jesus-garcia.html

E.   Son Abelardo “Abe” G. Sotelo was born March 5, 1957 in Ward County. He was living in Abilene, Texas in August 2011.
4.    Son Dolores Sotelo was born in Glenn Springs, Texas March 10, 1924. He was a student at the Castolon School during the 1932-1933 school year. In May 1940 he was living with his parents in La Coyota and working as a farm laborer. He married Nicanora Hernandez Ortiz and they made their home in Del Rio. They later moved to Monahans. Dolores, still a resident of Monahans, died July 12, 1982 in Odessa and Nicanora died in Monahans November 30, 2007. They had six children:

D.   .Daughter Selbia Valles was living in Monahans, Texas in January, 2009. Her married name is Martinez.
7.    Daughter Josefa Sotelo, twin of Sofia, was born in Glenn Springs September 18, 1928. In November, 1999 she was a resident of Fort Stockton, Texas. She died at Hospice House in Odessa, Texas on January 29, 2007 and was buried in Rose Hill Cemetery in Odessa on January 31, 2007. She married Julian Granado Baiza, son of Candelario Baiza and Albina Granado. (see http://www.lifebeforetheruins.com/marcelo-baeza.html for more information on the Baeza/Baiza family). Julian died in Belton, Texas January 29, 2007 and Josefa died in Hospice House, Odessa January 29, 2007. She is buried in the Rose Hill Section of the Odessa Cemetery. Josefa and Julian had six children:

A.   Daughter Albina Baiza was born November 24, 1952 in Fort Stockton and was living there in May 2010. Her married name is Gonzalez.

F.    Daughter Yolanda Baiza was born October 15, 1976 in Fort Stockton. She was living in Fort Stockton in May 2010. Her married name is Saucedo.
8.    Son Ricardo Sotelo was born in Castolon February 6, 1930. In May 1940 he was living with his parents in La Coyota. As an adult he lived in Del Rio, Fort Stockton, Monahans and eventually  Odessa. In Odessa he worked for Jones Brothers Dirt and Paving Co. He retired from that company after 37 years of service. Ricardo died in Odessa January 10, 2011 and is buried in Rose Hill Cemetery, Odessa. His wife Rosenda Garcia preceded him in death. Ricardo and Rosenda had six children:

E.   Daughter Diane Sotelo was born in Monahans April 30, 1959. She was living in Monahans in January 2011. Her married name is Heredia.

F.    Daughter Mary Ann Sotelo was born June 27, 1964. She married Shane Harris. In January 2011 they were living in Odessa.
Petra and Albino had eight children:

B.   Daughter Olga Sotelo Garcia was born December 16, 1961 in Fort Stockton. She married Eduardo Francisco Zaragoza in Del Rio July 18, 1981. In August 2012 they were living in Fort Worth. They had three children:

(3)  Daughter Kristina Michelle Zaragoza was born in Fort Worth November 6, 1990.

C.   Daughter Maria Cecilia “Mary” Garcia was born in Del Rio September 13, 1963. She married David Salinas and in August 2012 they were living in Weslaco, Texas. They had one child:

H.   Daughter Leticia Garcia was born August 18, 1970 in Fort Stockton. She married Reymundo Martinez, Jr. in Del Rio and they had four children: 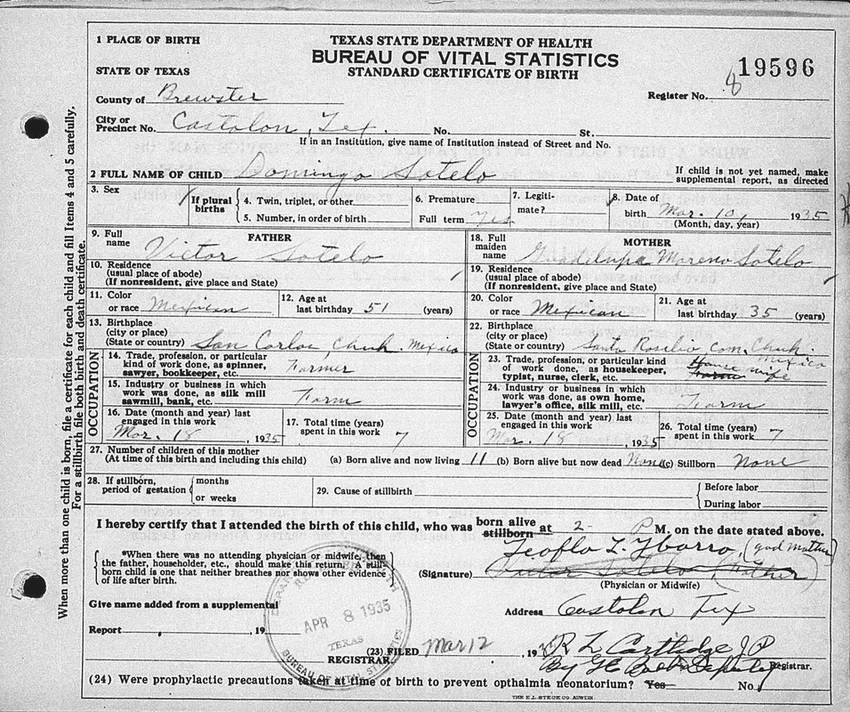 11.    Daughter Maria Elena “Mary Helen” Sotelo was born on August 19, 1937 in La Coyota and was living there with her parents in May 1940. She married Jose Luis Gomez and in January 2011 they were living in Del Rio. They had three children:

(a)  The Mariscal Mine was in operation from 1917 to1923, the most productive period in its history.

Marriage records from St. Agnes Catholic Church in Terlingua, available on microfilm from The Church of Jesus Christ of Latter-day Saints.

Indexed (brief) versions of birth, death, and marriage records, accessed via Family Search.org, a service provided by The Church of Jesus Christ of Latter-day Saints.

Copyright  2010 by Bob Wirt; all rights reserved.
This work may not be copied or used in whole or part for publication without the written consent of the author.
Individuals may use this information freely to develop and maintain family histories for their personal use.