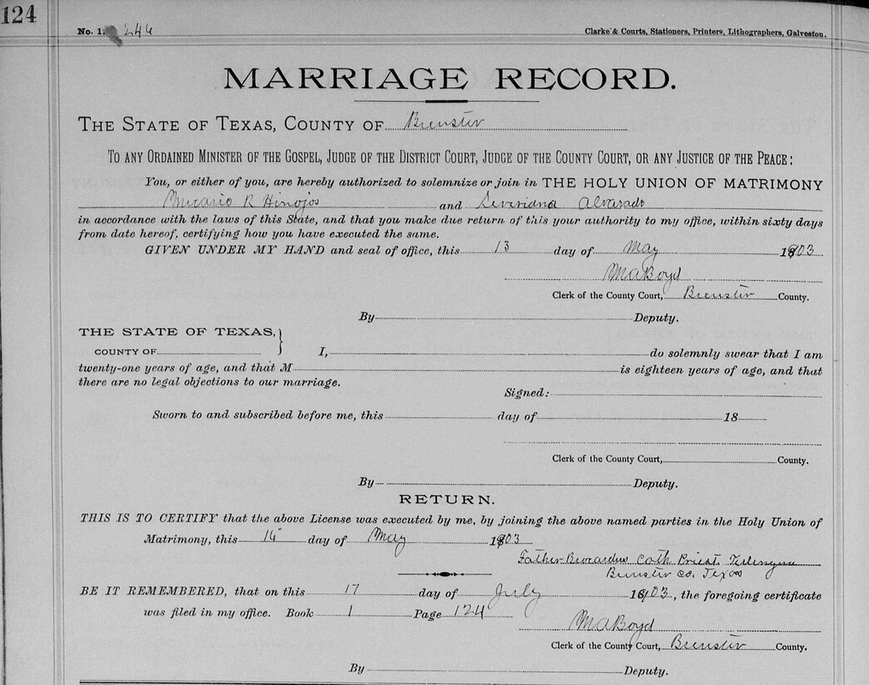 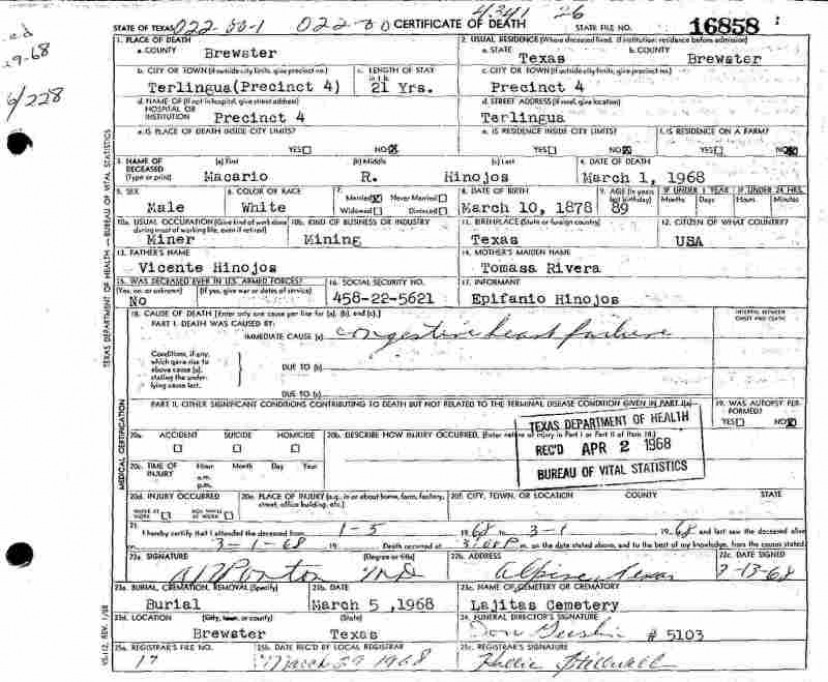 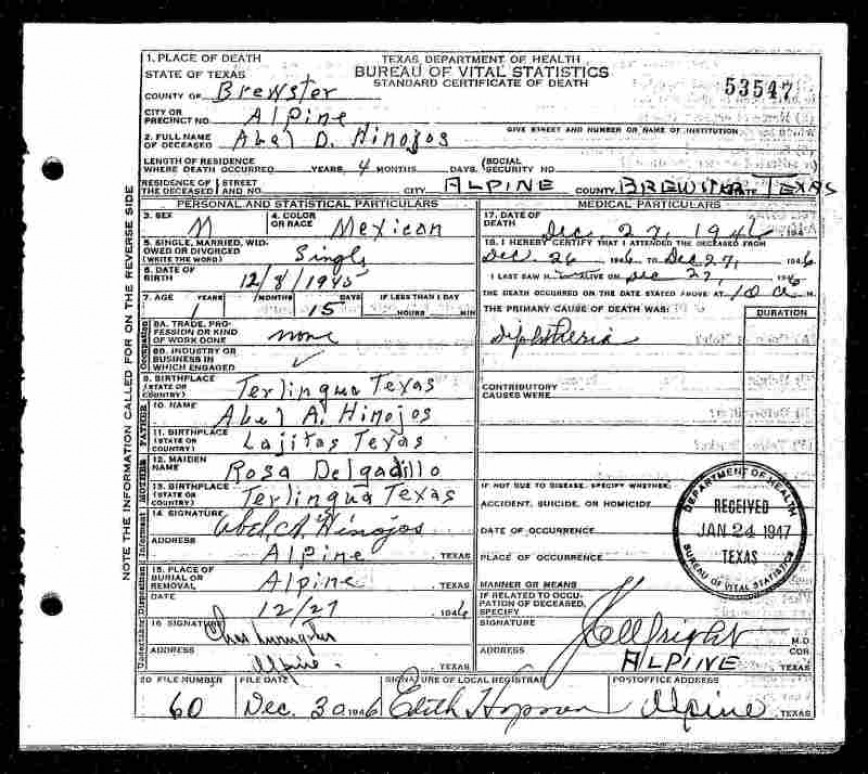 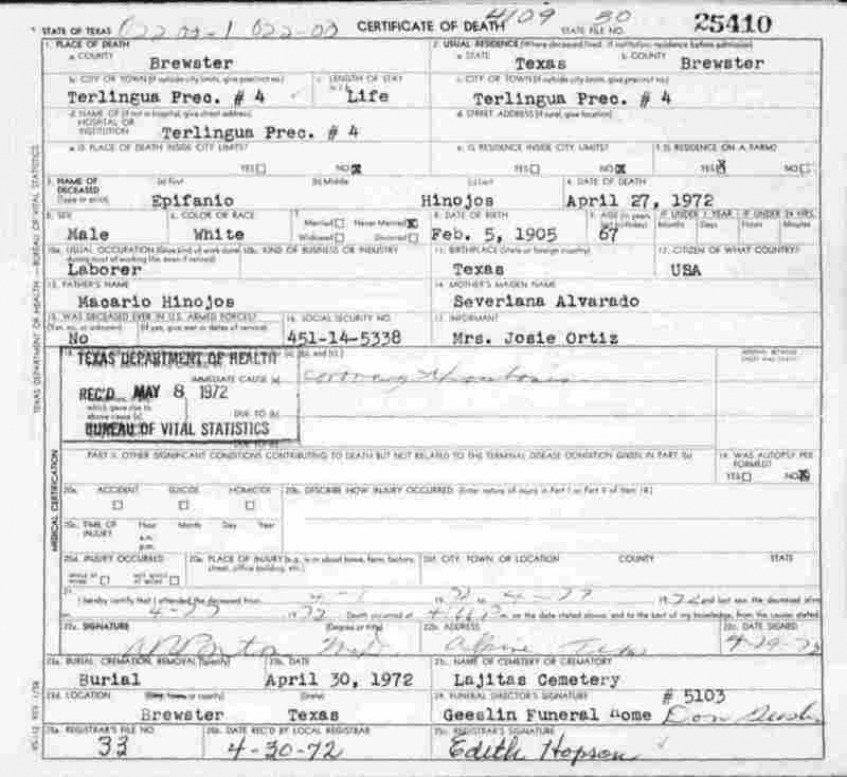 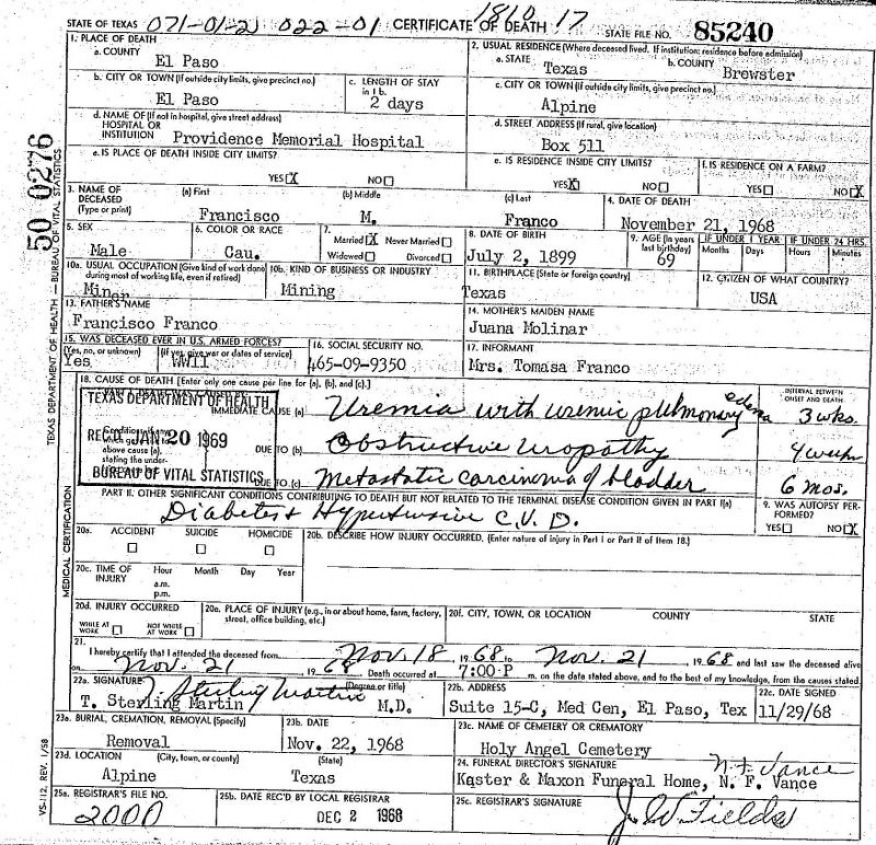 Rosary services will be held 7 p.m., Thursday, April 2, 1998, at Our Lady of Peace. Mass will be at 2 p.m. Friday at Our Lady of Peace with burial to follow at Holy Angels Cemetery with Father Rick Ruiz officiating. Arrangements are under the direction of Geeslin Funeral Home.

Abel Hinojos was born November 30, 1916 in Lajitas, Texas, moving to Terlingua, working in the mines. He then moved to Alpine working for the railroad as a general laborer and with the Alpine School system and the City of Alpine as a maintenance person. He was a volunteer worker at the 4-H barns. He married Rosa Delgadillo in Terlingua, Texas, July 20, 1942.

She is survived by one son, Rogelio Ortiz of Phoenix; three daughters, Carmen Olibas, Josie Salcido and Dolores Ochoa of Monahans; one brother, Santiago Hinojos of Odessa; one sister, Isabel Villa of Alpine; 10 grandchildren and 17 great-grandchildren.

She was preceded in death by her parents, Macario and Severiana Hinojos; her husband, Rubin Garcia Ortiz; five brothers, Epifanio, Macario, Jr., Abel, Hipolito and Francisco Hinojos; and one sister, Tomasa Franco.

Maria “Mary” Franco Vega, age 61, of Grandfalls, passed away Friday, September 9, 2005 at her home. She was born January 11, 1944 in Buena Suerte, Texas, to Francisco and Tomasa (Hinojos) Franco. She married Jesus Vega in December, 1963, in Alpine, Texas.  A funeral mass in Alpine, and a memorial service in Grandfalls will be held later in the week. Burial will be in the Holy Angels Cemetery in Alpine. Services are under the direction of Family Funeral Services.  Survivors are her husband, Jesus Vega of Grandfalls, and sons, Jesse Vega of Grandfalls, Danny Vega of San Antonio, and David “Gis” Vega of Ft. Worth. Also a daughter, Angie Portillo of Alpine. She is also survived by her brothers, Joe Franco, Jesus Franco and Frank Franco all of Alpine, and sisters, Maye Salgado of Odessa and Margie Urquidez of Globe, Arizona.