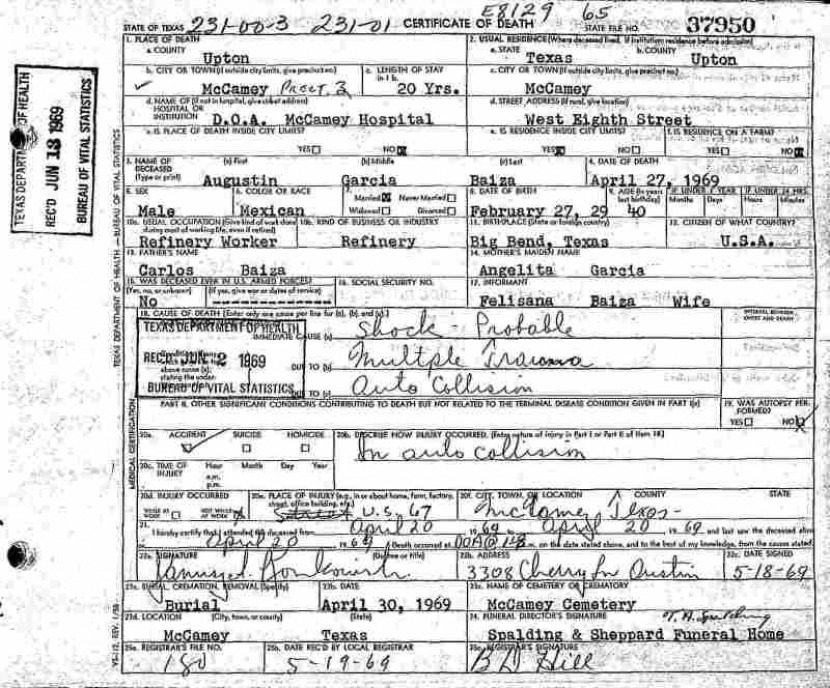 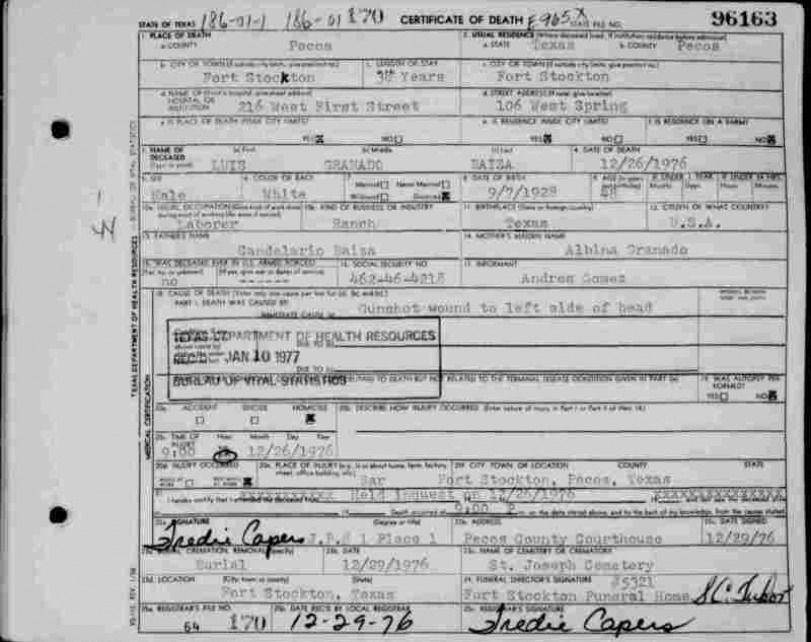 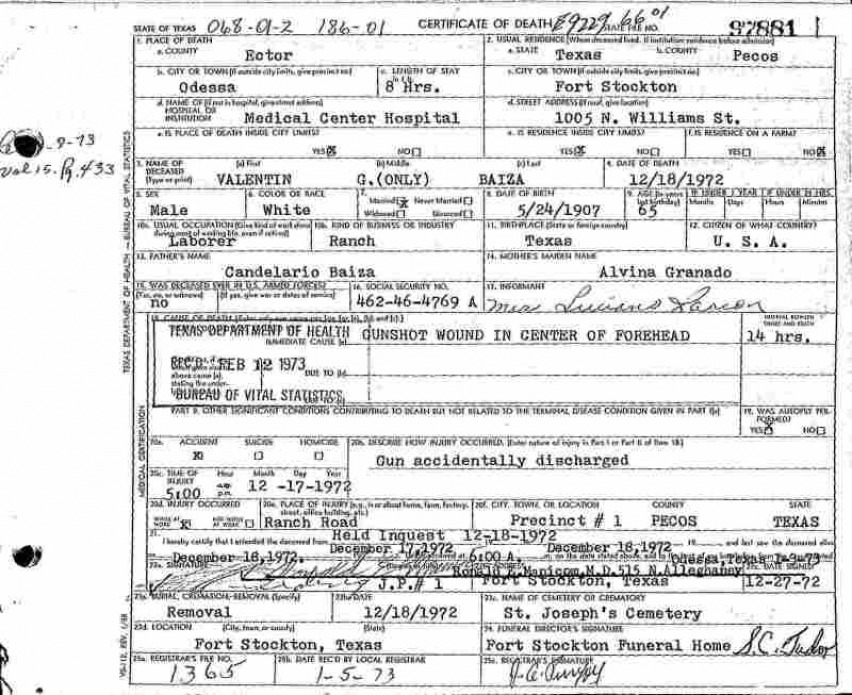 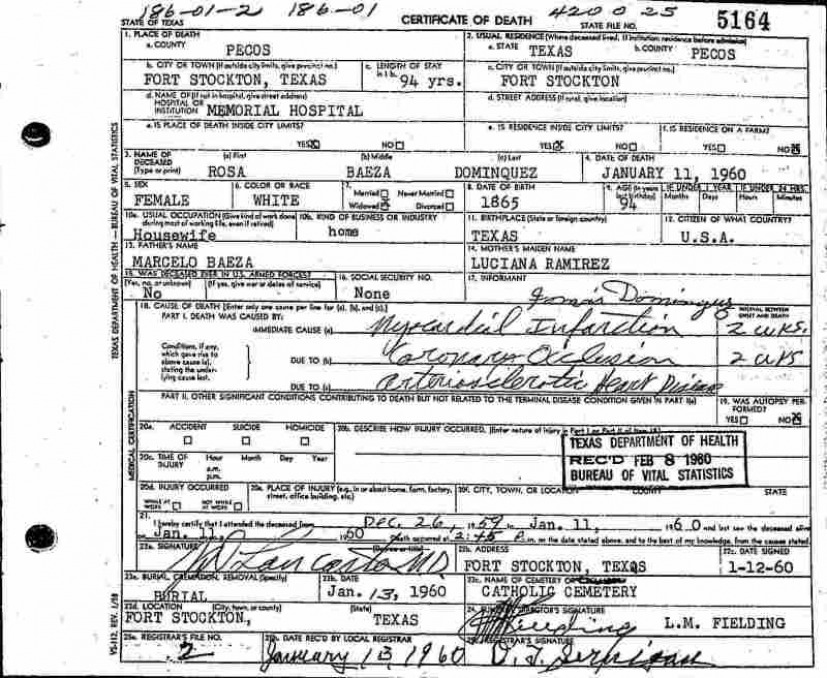 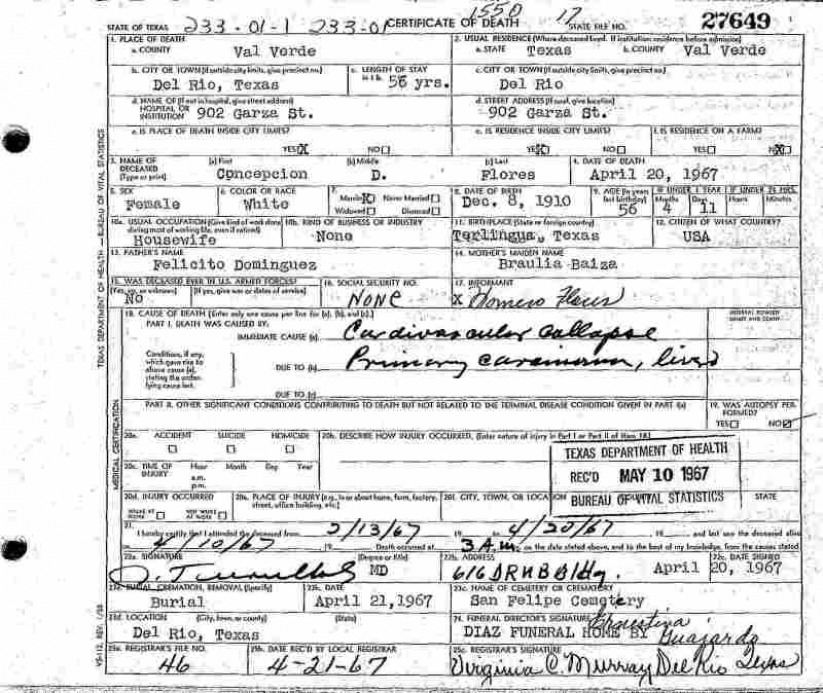 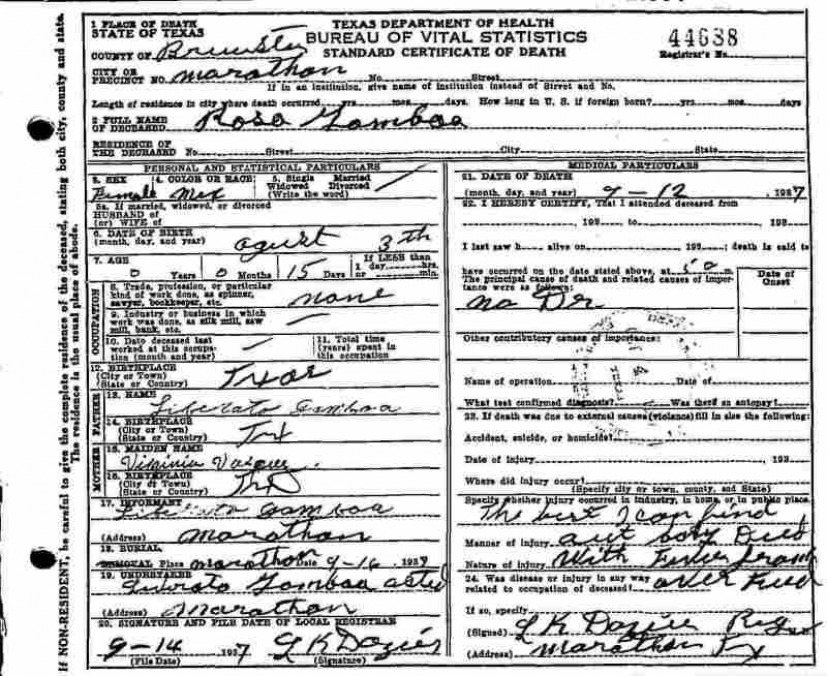 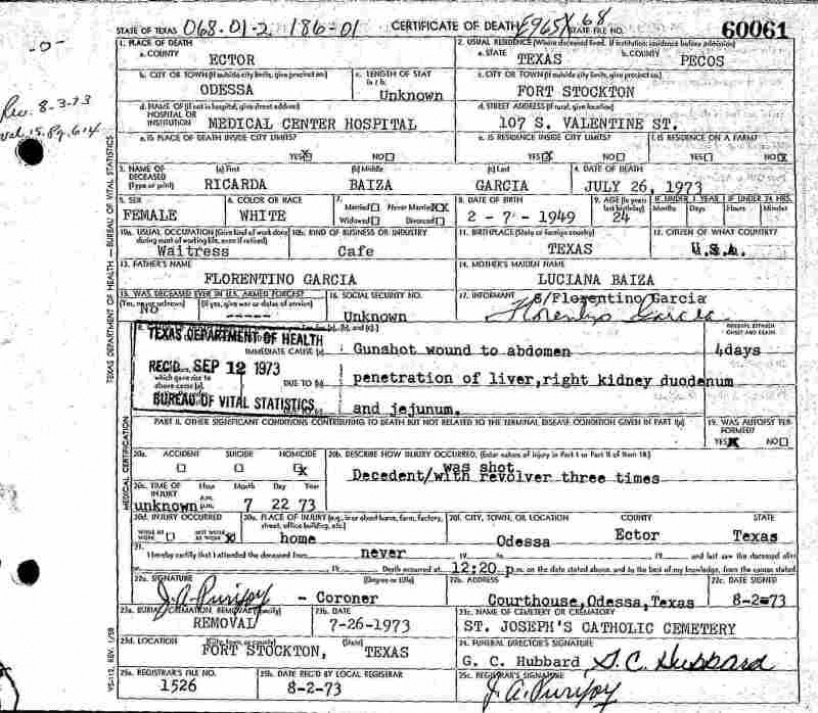 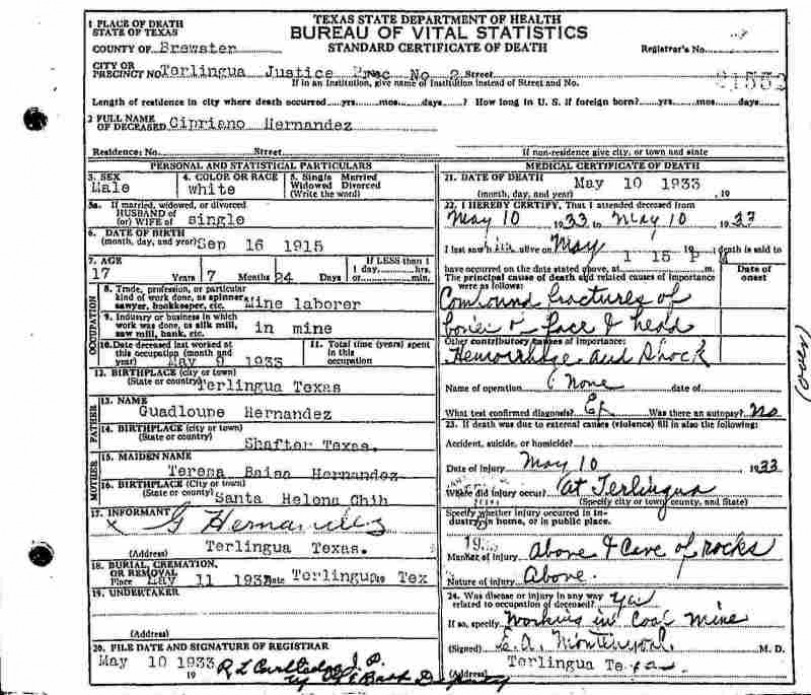 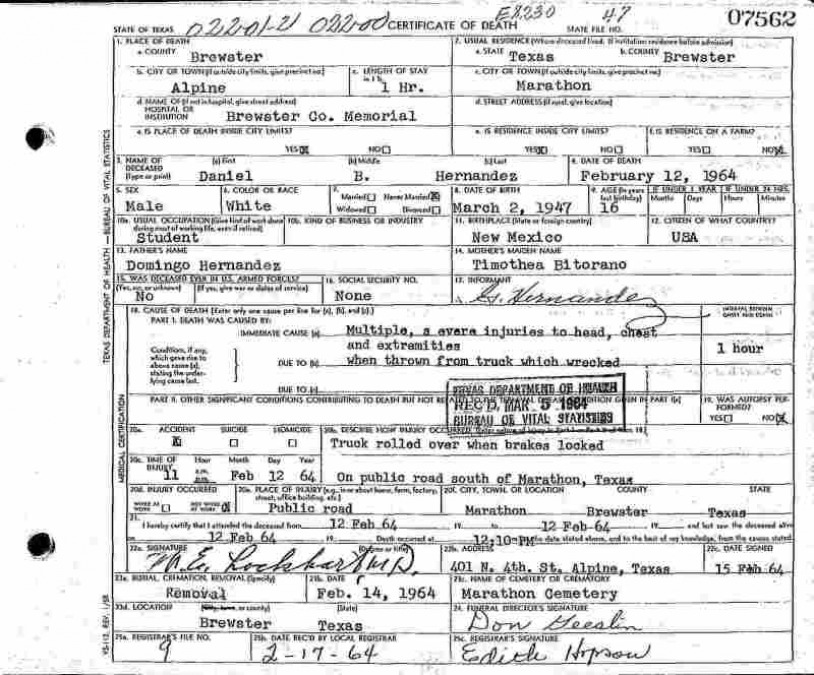 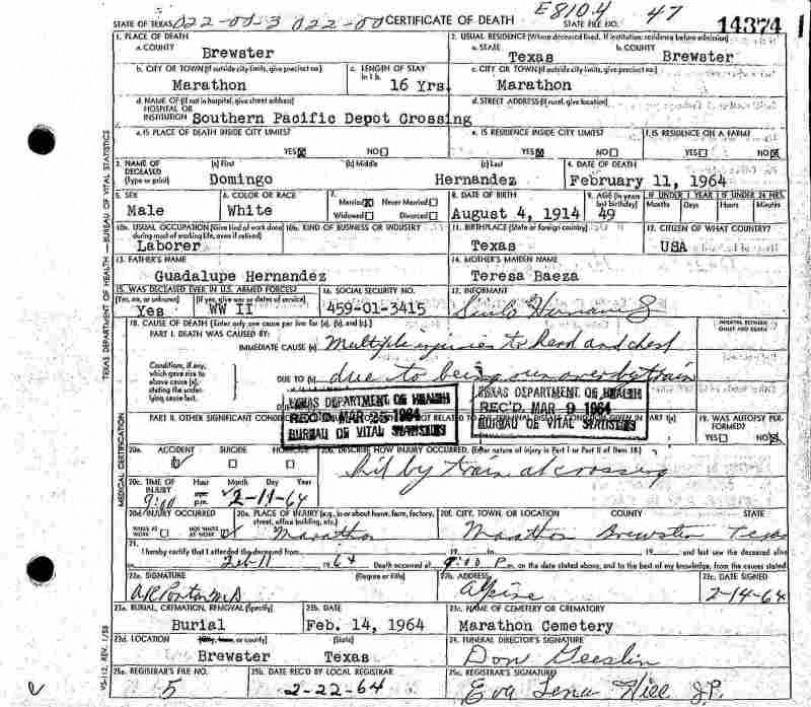 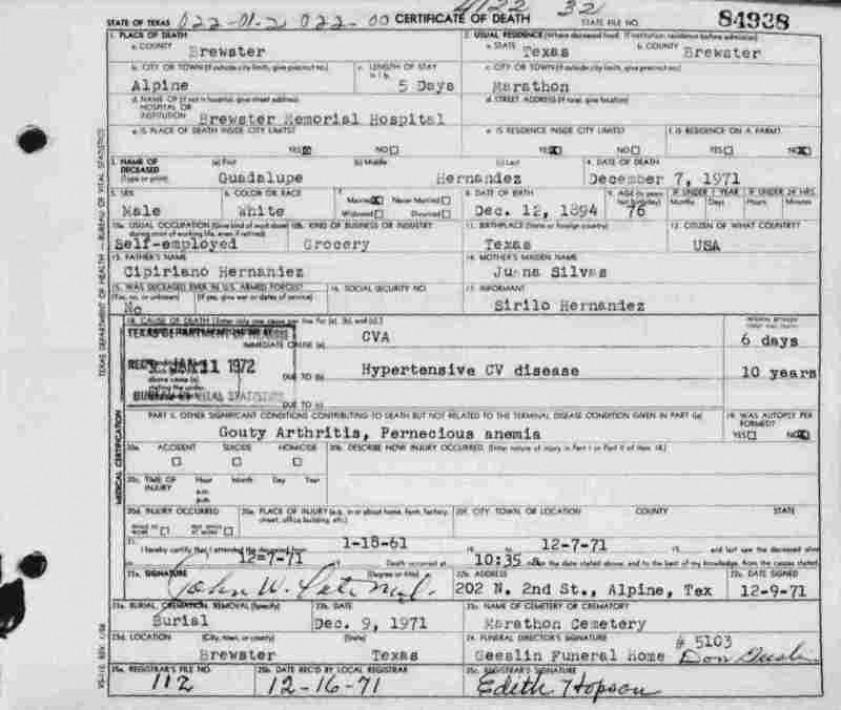 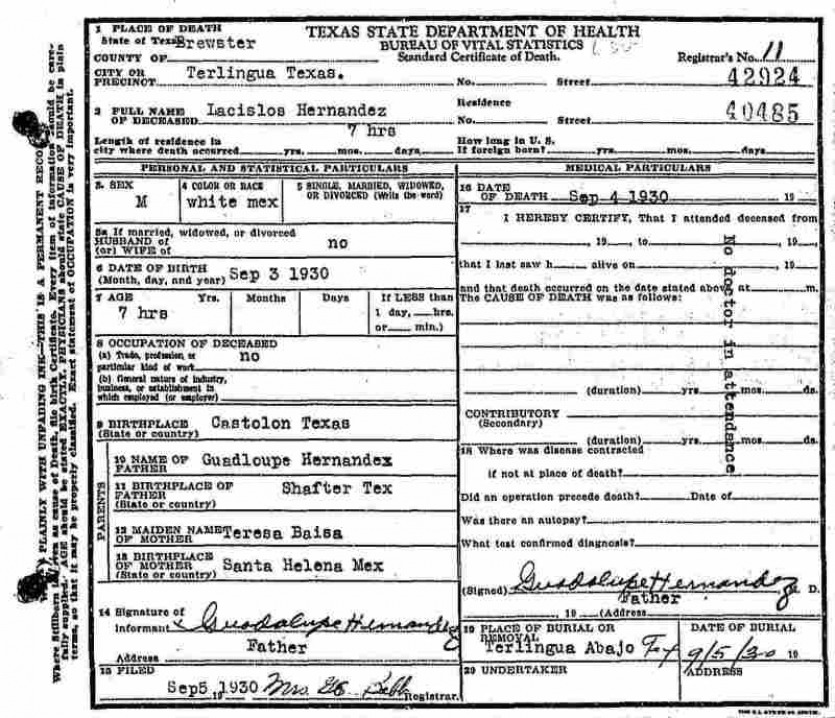 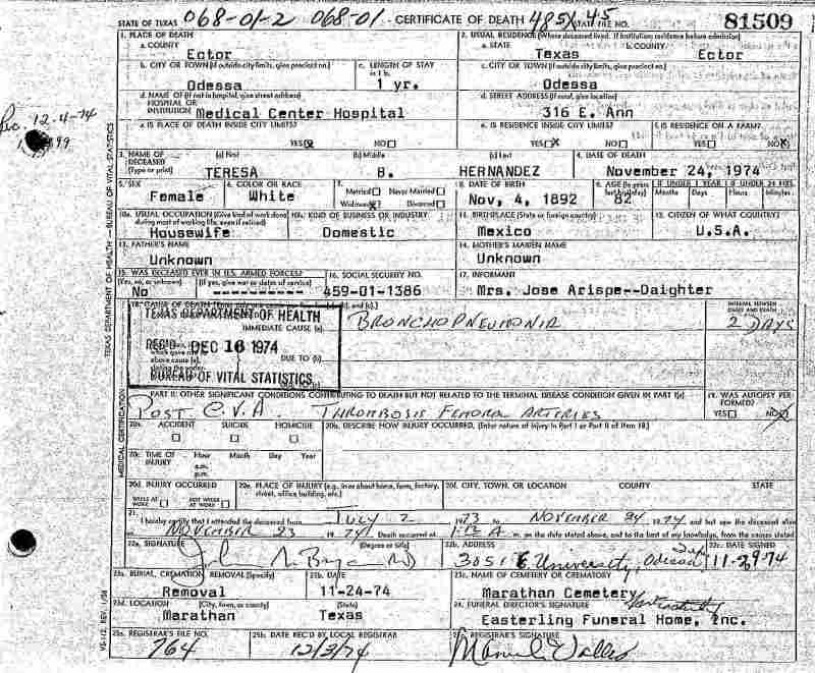 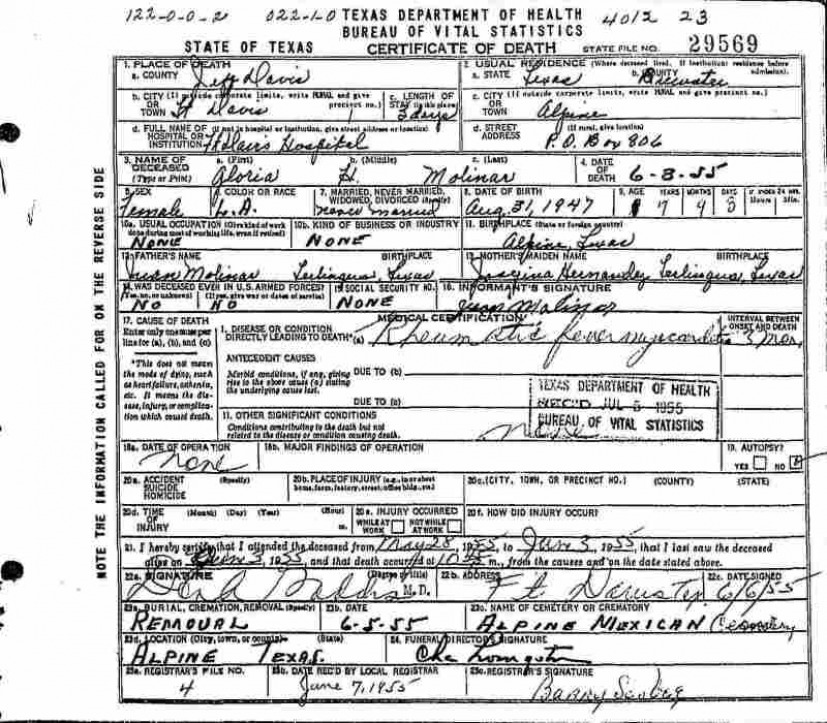 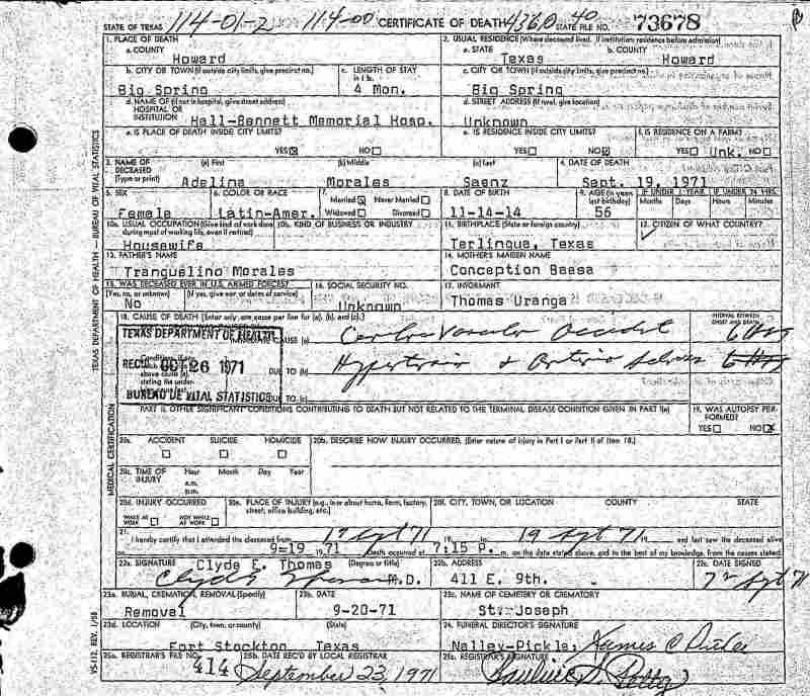 Benita Baeza, 87, went home to be with her heavenly father on Friday December 21, 2007 at her residence in Midland.

She was born on August 4, 1920 in San Vicente, Texas to the late Patricio and Maria Caballero.

Benita was raised in El Rancho Murcielago, in Chihuahua, Mexico.

The couple lived in Ojinaga, Chihuahua, Mexico for a number of years and later settled in Midland.

Benita was a homemaker most of her life. She enjoyed sewing, cooking and reading her Bible. She also enjoyed being with her family and friends. She was a Catholic.

Rosary will be held Sunday December 23, 2007 at 7:00 P.M. at Pipkin Chapel. Funeral Mass will be held Monday, December 24, 2007 at 11:00 A.M. at Our Lady of Guadalupe Catholic Church with Fr. Edward De Leon, OMI officiating. Interment will follow at Serenity Memorial Gardens.

Services are under the direction of Pipkin Funeral Home. Family messages and condolences may be e-mailed to: pipkin@nts-online.net.

Published in Midland Reporter-Telegram on December 23, 2007

She was born in Castolon and was a 35-year resident of Big Lake. She was Catholic.

Julian Granado Baiza, age 86, of Belton, Texas, passed away on May 7, 2010 in Belton, Texas. He was born in Terlingua, Texas on June 26, 1923 to Candelario Baiza and Albina Granado. A memorial service was held Saturday May 15, 2010 at Memorial Funeral Home Chapel at 2:00 PM in Fort Stockton, Texas.
He is preceded in death by: Spouse, Josephine Sotelo Baiza, parents, Candelario and Albina Baiza, great great granddaughter, Iris Nichole Baiza, brothers, Valentine Baiza, Manuel Baiza and Luis Baiza, and sisters, Francisca Gomez and Catarina Baiza.

Telesforo Baeza, 76, of Midland died on Monday, Jan. 11. Funeral services will be held at 10:00 am Saturday, Jan. 16, at the Nalley-Pickle & Welch Chapel. Interment will follow at Serenity Memorial Gardens. Survivors include children, Maria Baeza of Houston; Norma Baeza of California; Teresa Baeza, Rosa Baeza, Rosa Baeza and Alma Baeza, all of Midland; Lilia Rodriguez and Herlinda Baeza, both of San Antonio; Rosenda Gomez of Andrews; Argentina Castellanos and Raquel Vargas, both of Michigan; Fernando Baeza and Juan Baeza, both of Houston; Raul Baeza and Julio Baeza, both of Michigan; Asael Baeza of San Antonio; 1 brother; 2 sisters; numerous grandchildren, great grandchildren, great-great grandchildren, nieces and nephews. Arrangements are under the direction of Nalley-Pickle & Welch Funeral Home & Crematory of Midland. Online condolences can be made at: www.npwelch.com

Published in Midland Reporter-Telegram on January 13, 2010

Trinidad D. Baeza, 88 of Midland, went to be with his heavenly father on Saturday, October 31, 2009 at a family home. He was born on May 22, 1921 in El Sauz Chihuahua, Mexico to the late Juan and Paula Baeza. Trinidad was born and raised in El Ojito and Providencia MPIO Manuel Benavidez. He later met and married the late Benita Baeza on June 25, 1945 in Rancho El Murcielago. The couple later moved to Ojinaga Chihuahua, then moved to midland in 1985. Trinidad worked in cotton gin and in agriculture most of his life. He enjoyed listening to music, singing and loved to be with his family, he was of catholic faith. Trinidad is preceded in death by his wife Benita Baeza and his brother Ramon Baeza. He leaves behind to cherish his memory his two sons Juan Baeza and Jesus Baeza, daughter Antonia Tovar all of Midland, TX, three brothers Joaquin Baeza, Inez Baeza of Jal, New Mexico, and Cornelio Baeza of Las Vegas, Nevada, two sisters Braulia Ramirez of Austin, TX and Manuela Caballero of Ojinaga, Chihuahua Mexico, eleven grand children, seventeen great grandchildren and numerous nieces nephews and cousins. Funeral mass will be held on Monday November 2, 2009 at 3:00 PM at St Stephens Catholic Church with Fr. Gilbert Rodriguez officiating. Pallbearers are Jesus Baeza Jr., Matt Houston, Juan Baeza Jr., Ernesto Trillo, Manuel Ochoa Jr, Ramon Tovar, Jesus M. Tovar, Alecio Tovar, and Rogelio Tovar. Funeral services are under the direction of Lewallen-Garcia-Pipkin Funeral Home. Family messages and condolences may be emailed to: pipkin@nts-online.net.

Published in Midland Reporter-Telegram on November 2, 2009

Born December 10, 1910 in San Vicente, he was the son of Anastaco and Victoria (Baeza) Gamboa.
Margarito was united to Narcisia Ramirez at Saladita Ranch, Chihuahua, Mexico in 1943. She preceded him in death in 1985.

A resident of Fort Stockton since 1971, Margarito owed and operated a ranch.

In addition to his wife he was preceded in death by his parents.

He is survived by his daughters Rosa Elva Gonzalez and Petra Rosas, both of Fort Stockton and Aurora Porras, Grandfalls; his sister, Ignacia Galindo, Kermit, 11 grandchildren and 18 great grandchildren..

Interment was in St. Joseph Cemetery.

Arrangements were under the direction of Fort Stockton Funeral Home.

Luciana B. Garcia, 83, Fort Stockton died Wednesday, March 22, 2006 in Odessa Texas. She was born January 6, 1923 in Cerro Chino, the daughter of Pablo Baiza and None Dodson.

Published in the Odessa American on 2/29/2008.
ODESSA Alfredo Ortiz Hernandez, 58, who resided at Seabury Nursing Home, beloved son, brother, uncle and friend went to be with our Lord on Thursday, February 28, 2008.

He was born October 20, 1949, to Cirilio B. Hernandez and the late Ernestina O. Hernandez.

Alferdo was a Vietnam Veteran and worked as a foreman for Southern Pacific Railroad.

Alfredo will be greatly missed by his father Cirilio B. Hernandez; sister, and brother-in-law, Sylvia H. and Manuel Villarreal; sister, and brother-in-law, Christina H. and Juan T. Cordova; nephew, Manuel "Manny" Villarreal Jr. of Odessa; nieces, Diane Villarreal of Dallas, Sabrina Cordova of Austin, Amy Cordova of Dallas and Denise Villarreal of Odessa; great-niece, Mireya A. Hernandez of Odessa. He will also be missed by numerous aunts, uncles cousins and friends.

Alfredo is preceded in death by his loving mother, Ernestina O. Hernandez.

Rosary will be held at 7 p.m. Friday, February 29, 2008, at Odessa Funeral Home. Mass will be celebrated at 10 a.m, Saturday. March 1, 2008 at St. Mary's Catholic Church in Marathon, TX. Burial will follow at Marathon Cemetery.

Rosary was said at Hubbard-Kelly chapel at 7 p.m. Wednesday, June 16. Services will be held at 2 p.m. Thursday (today) at St. Joseph’s Catholic Church.

Martinez, who was from Marathon, had worked at Big Bend National Park.

His survivors include his wife, Francesca, of Odessa; three sons, Abundio (Leo) of Odessa, Maximo of Marathon, and Antonio of Odessa; two daughters, Dalila Weeks of Odessa and Elisa Hastings of Austin.

She was born Feb. 13, 1904, in Terlingua and been a longtime Marathon resident. She was a homemaker and a member of the Catholic church.

Funeral services were Friday, Dec. 20, 1996, at St. Mary’s Catholic Church in Marathon with burial in Post Ranch Cemetery in Marathon.

Survivors include a brother, Julian Baeza of Fort Stockton; three sisters, Frances Gomez and Cuca Celaya, both of Fort Stockton, and Maria Garcia of Marathon; and numerous nieces and nephews.

Arrangements were by Geeslin Funeral Home of Alpine.

Candelario Muniz Baesa, age 76, passed away Friday, December 10, 2010 in Odessa. He was born May 2, 1934 in Casleton, Texas to Adolfo Baesa and Epitasia Muniz. He grew up in Alpine and Ft. Stockton. He was a "true cowboy" and loved to break horses. He grew up on a farm and loved to rodeo as a young boy. He married Angelita Lerma August 23, 1955 in Andrews, Texas. He worked for Ruthco as an assistant Foreman in the oilfield. He enjoyed riding his tractor and fishing; but mostly he loved his grandchildren and great grandchildren. He was preceded in death by his parents; sisters, Regina Yharte, Celestina Carnero; brother, Gilberto Baesa; and granddaughter, Nichole Baesa. Survivors include his wife Angelita Baesa, his son Larry Baesa and wife Stacy of Odessa; Grandchildren Ricky and Alisyn Baesa, Michael Baesa, April Baesa, Trevor Ritcherson, all of Odessa and Randi Ritcherson of Andrews; seven great grandchildren; brothers, Claudio Baiza of McCamey, and Adolfo Baesa, Jr. and wife Felicitas of Midland; sisters, Juliana Dominguez of Ojinaga, Mexico, Bertha Rodriguez of Odessa, Leonila Baesa of Arlington and Margarita Ramirez of Midland; and many cousins, nieces and nephews. Rosary will be held at 7:00 PM Sunday, December 12, 2010 at Sunset Memorial Funeral Home. Mass is scheduled for 2:00 PM Monday, December 13, 2010 at St. Ann's Catholic Church in Midland. Burial will follow at Resthaven North in Midland. The family would like to express special thanks to Respiratory at Medical Center and Odessa Regency Hospital. Funeral arrangements are under the direction of Sunset Memorial Funeral Home.
Regina Yharte

Regina Yharte was born in Alpine Texas September 7, 1928. A longtime Midland resident, she enjoyed being with her family and friends. She died on January 4, 2007 in Midland.

A Rosary Prayer Vigil will be Sunday at 7 pm at the Thomas Chapel. Funeral Mass will be Monday at 1 pm at St. Ann's Catholic Church, burial will be in Resthaven Memorial Park. 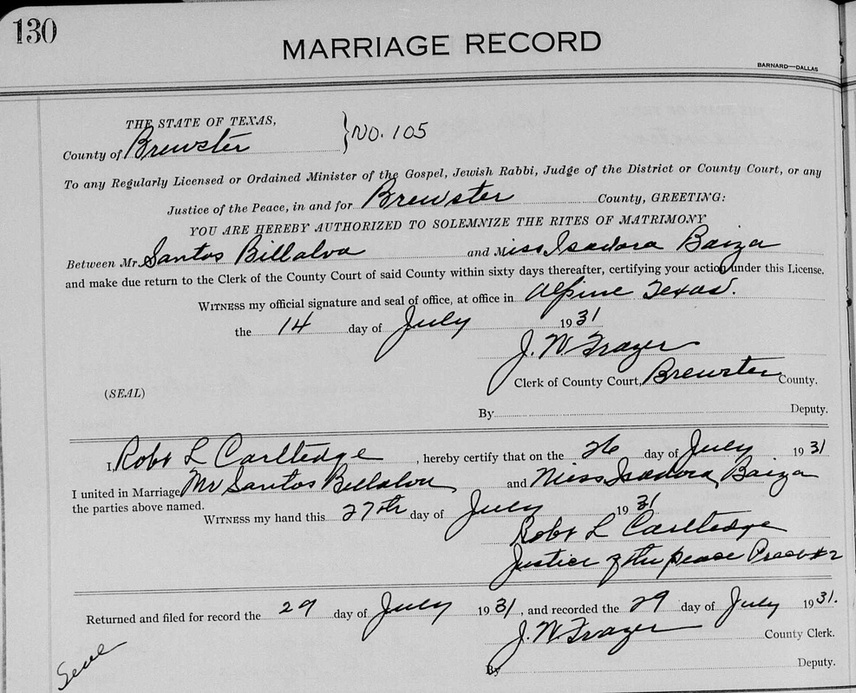