A Documented Research Report by Louisa Madrid and Bob Wirt
Version 3, May 6th, 2011 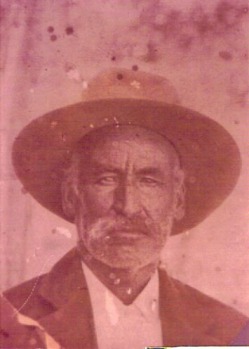 In their early years in Terlingua, Julian and his brother Dolores worked as freighters and hauled mail between Terlingua and Alpine. Julian’s three oldest sons, Monico, Marcos and Dario drove the mail coach. By 1916 Julian probably was working for the Chisos Mining Company, but not in the mines. In 1927 he was working as a salaried employee of the company, earning $54.25 per month. In July 1927 his salary was charged to the Water Account, suggesting that his job was delivering water to the residents of Terlingua. 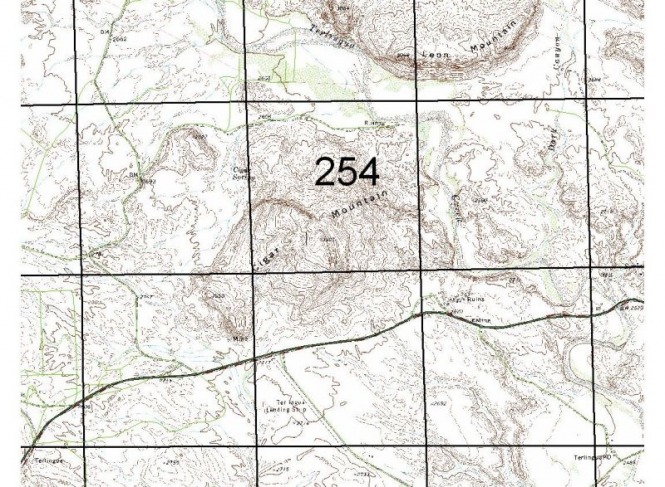 Julian owned three sections of land, nearly 2000 acres, on the western flank of Nine Point Mesa, about 20 miles north of Study Butte. The reason for his interest in this land is not known, but in January 1918 he sold it to his brother Dolores. In September 1918 Julian purchased Section 254 of Block G-4 from Wayne Cartledge. This 640-acre tract lies between Study Butte and Terlingua and includes most of Cigar Mountain. This tract is still known today as the "Garcia Section". (The road shown on the map is present-day FM 170, which connects Study Butte and Lajitas.)

Julian died in Malaga, New Mexico February 2, 1929 and is buried there. Isabel moved to Alpine in 1929 and was living with her daughter Eufemia in 1930. Isabel died in Alpine June 5, 1941 and is buried there. Family recollections of Julian and Isabel can be found on the Familias de Terlingua web site at http://www.familiasdeterlingua.com/recuerdo---julian-garcia-by-mary-holguin.html

Julian and Isabel had eleven children:

1.    Daughter Simona Garcia was born in Fort Davis October 28, 1884. She died in Terlingua in 1907 and is buried in El Camposanto del Arroyo (also known as the 248 Cemetery) near Terlingua. At the time of her death she was engaged to be married to Anastacio Valenzuela. 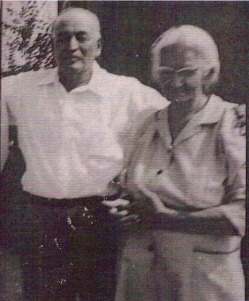 He met his wife, Luz Chavez, at a dance in Lajitas and they were married November 4, 1909 in Terlingua. She was born December 16, 1891 in Ojinaga, Chihuahua, Mexico, the daughter of Encarnacion “Chon” Chavez and Severa Gomez. Monico and Luz lived in a small house owned by Monico’s uncle Dolores Garcia just east of Terlingua Creek. While living there Monico planted a fine garden, but a neighbor's pig ate most of the crop. For this story see http://www.lifebeforetheruins.com/pig-in-monicos-garden.html
In the early 1920’s Monico and Luz moved to New Mexico, eventually settling in Loving. Luz died September 16, 1972 and Monico died January 15, 1980. Both are buried in Loving, New Mexico.

Granddaughter Mary Lerma Holguin wrote a moving tribute to Monico and Luz. It can be found at http://www.lifebeforetheruins.com/monico-and-luz-garcia.html

Monico and Luz Garcia children, taken about 1929 during
family visit to Uncle Dolores Garcia's in Terlingua 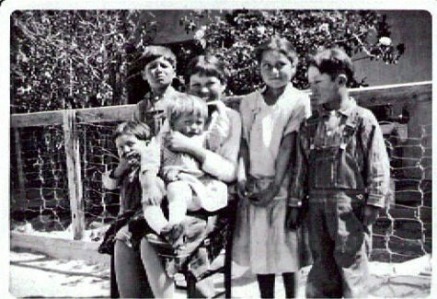 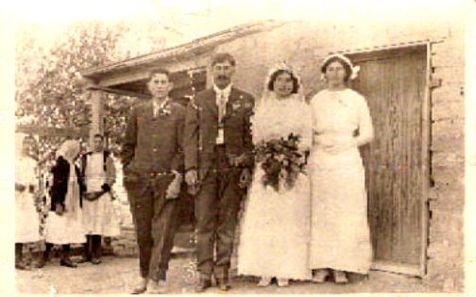 Marcos married Irene Urueta November 13, 1913 in Marathon. She was the daughter of Rosario Urueta and Honorata Garza. Irene was born February 25, 1890 in Texas and died January 9, 1973 in Brewster Memorial Hospital, Alpine, of colon cancer. She is buried in Holy Angels Cemetery. Marcos and Irene had seven children: 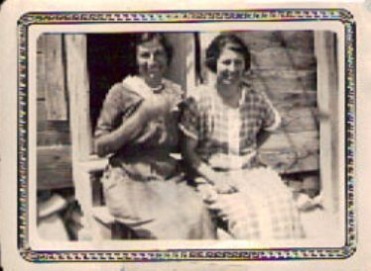 5.   Daughter Fabiana Garcia was born in Fort Davis January 20, 1892 and was baptized there January 23, 1892. Her godmother was Florentina Castro. She was still living with her parents in Terlingua in 1920. She died in Hotel Dieu Hospital, El Paso September 16, 1958 of bladder cancer and is buried in Alpine.

6.   Son Dario Garcia was born December 19, 1894 in Fort Davis. Later in life he assumed the name Manuel. He accompanied his parents to Marathon, then to Terlingua, where he and brothers Monico and Marcos operated the mail coach between Terlingua and Alpine. He married Ignacia Sosa in Jesus Nazareno Temple, Ojinaga, Chihuahua, Mexico in 1918. She was born February 1, 1902 in Terlingua, the daughter of Aniceto Sosa and Prejedes Gomez. She was baptized April 13, 1902 in Terlingua by Father Brocardus. Her godparents were Emilio Beneventes and Petra Olveros. Dario and Ignacia had one child:
A.      Manuel Garcia was born October 18, 1918 and died February 7, 1980. He is buried in Carlsbad, New Mexico. His wife’s name was Edna Marie.

7.   Son Santiago Garcia was born July 25, 1897 in Fort Davis. He died at his home in Huron, California September 9, 1993. He moved with his parents to Marathon, then to Terlingua. From 1920 until at least 1937 he worked for the Chisos Mining Co. as a miner and pumper. In July 1934, while working for Chisos Mining Co., he was injured while working on a 4 inch pipe line between #39 and #9 shafts. He dropped a pipe on his little finger, cutting it badly, but the bone was not broken. He was able to continue working. His Chisos employee number was 754.

On October 14, 1921 Santiago married Rosario Mata. She was born in Terlingua de Abajo November 6, 1904, the daughter of Guadalupe Mata and Merced Herrera. She was baptized in Terlingua February 6, 1905 by Father Brocardus. Her godparents were her grandparents, Gregorio Mata and Guadalupe Ortega. She died in Huron, California March 22, 1985. Santiago and Rosario had ten children. 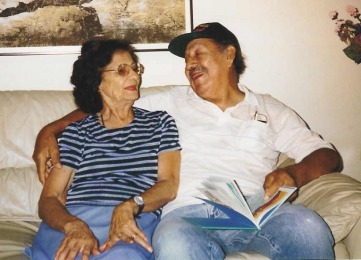 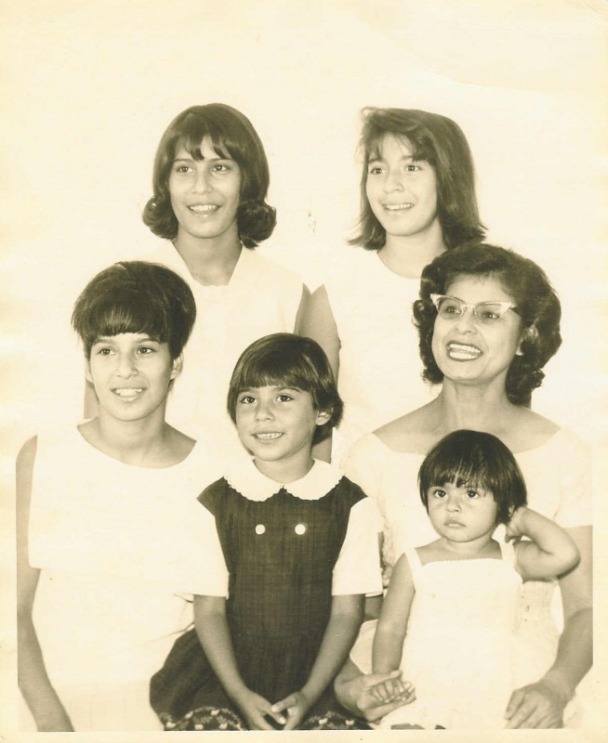 The house that David helped to build at Flechas (248) Mine 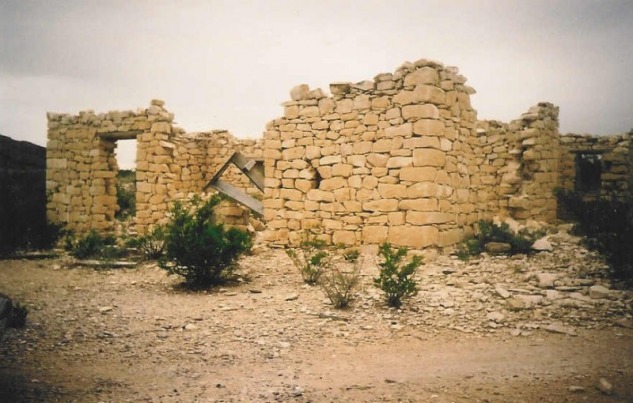 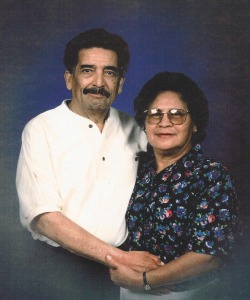 9.    Daughter Eufemia Garcia was born March 20, 1901 in Marathon. She was baptized in Marathon May 22, 1901 by Father Brocardus. Her godparents were Gregorio Marufo and Natividad Fierro. She died January 7, 1993 in Big Bend Regional Medical Center and is buried in Holy Angels Cemetery, Alpine. On January 9, 1927 she married Ricardo “Ricarte” Loya, son of Ambrosio Loya and Zoila Vasquez. He was born in Mexico May 20, 1900 and died in Alpine May 13, 1967. He is buried in Alpine. He worked for the Chisos Mining Co. in March 1925, employee number 696. In 1930 he was living in Alpine, where he owned his own home, valued at $1,000, and was working as a laborer, road construction. He died May 13, 1967 in Brewster County Memorial Hospital, Alpine, and is buried in Alpine. Eufemia and Ricardo had three children:
A. Daughter Esperanza Loya was born in 1929 and died December 25, 2009.
B. Daughter Rosa Loya was born August 30, 1932 in Brewster County. In January 1993 she was living in Fort Stockton.
C. Daughter Carmen Loya was born February 8, 1940 in Brewster County. In January, 1993 she was living in Fort Davis. She married Martin Villareal and they had four children:
(1). Son Martin Villareal, Jr.
(2). Son Rick Villareal.
(3). Daughter Martha Villareal.
(4). Daughter Maria Villareal. Her married name is Trevizo.

10.   Daughter Sabina Garcia was born in 1902 in Terlingua. She was living in the Terlingua area with her parents in 1920. She died in Big Bend Regional Medical Center, Alpine December 10, 2001 and is buried in Holy Angels Cemetery.

11.    Daughter Josefa Garcia was born March 23, 1905 in Terlingua. She was baptized September 11, 1905 by Father Brocardus. Her godparents were Antonio Enrique and Antonia Macias. She died in a hospital in Odessa August 30, 1997 and is buried in Holy Angels Cemetery, Alpine.

(a). As the mining operations reached greater depths, they frequently encountered water. Santiago apparently was one of the employees whose job was to pump water from the mine.

Copyright ã 2010 by Bob Wirt and Louisa Franco Madrid; all rights reserved.
This work may not be copied or used in whole or part for publication without the written consent of the author.
Individuals may use this information freely to develop and maintain family histories for their personal use.