A Documented Research Report by Bob Wirt
Version 3, revised November 28, 2011
Henry Bernard was born in April 1866 in Texas. His father was born in Ireland and his mother in Texas, but no additional information is available on them. Circa 1891 Henry married Carlota Holguin, who was born in Mexico circa 1872. In 1900 the couple was living in Presidio County in the Alamito area, referred to as Dysart Village in the 1900 Census. Henry was employed as a stock raiser according to that census.

Four of Henry and Carlota’s children were born in the area. Daughter Josefa was baptized in Lajitas in 1903, son Roberto in Big Bend (Study Butte area) in 1906, daughter Margarita in Terlingua in 1907, and son Francisco in Chisos (a) in 1909. Henry and Carlota were the godparents of Jose Menchaca, son of Benigno Menchaca and Teodora Gutierrez, baptized in Terlingua 29 April 1908
Carlota probably died in 1910 because of lingering complications from the birth of son Francisco. Soon afterward Henry and his family moved to Imperial, Texas, where Henry owned and operated a general store. Henry died in Imperial May 7, 1945 and is buried in Buena Vista Cemetery, about 5 miles southeast of Imperial.

Sometime after his arrival in Imperial, Henry married Antonia Jaquez. She was born in 1879 and was the daughter of Cesario Jaquez and Concepcion Tercero. Antonia was the widow of Silvestre Holguin (b), born in 1874. He was the son of Luciano Holguin and Luciana Lugo. Antonia and Silvestre were married August 12, 1898 in Jesus Nazareno Church in Ojinaga, Chihuahua, Mexico. They had three children, sons Silvestre and Luciano and daughter Juliana, all of whom married children of Henry Bernard and Carlota Holguin.

Henry and Carlota had ten children:

1. Son Juan “John” Bernard was born in October 1891 in Texas. In 1900 he was living with his parents in the Alamito area of Presidio County and in 1910 with his parents in the Terlingua area. From 1910 until his death in 1939 he was a resident of Imperial, Texas, where he was employed as a farm laborer. He died on April 25, 1939 of acute indigestion or Ptomaine poisoning and was buried the following day at Buena Vista. Juan was married to Alejandra Santos. They had one son:

2. Daughter Teresa Bernard was born in June 1893 in Texas. In 1900 she was living with her parents in the Alamito area of Presidio County. No additional information is available on Teresa.

B. Son Pedro Bernard Gonzalez was born October 23, 1915 in Texas. He served in the U.S. Military from 1944 to 1945 and later worked as a self-employed truck driver. He died May 9,1974 in Brooke General Hospital, Fort Sam Houston of complications of 3rd degree burns over 23% of his body. The burns were sustained during a vehicle fire reportedly caused by smoking in the vehicle. He is buried in Fort Stockton. Pedro’s wife’s name was Teodula.

6. Daughter Carlota Bernard was born in March 1900. Nothing more is known about her.

7. Daughter Josefa Bernard was born on 15 September1902 in Texas.  She was baptized on 13 February 1903 in Lajitas, Texas by Father Brocardus from St. Joseph’s Catholic Church in Fort Davis. Her godparents were Eugenio and Josefa Navarro. In 1910 she was living in the Terlingua area with her parents. Circa 1932 she married Silvestre Holguin, son of Silvestre Holguin and Antonia Jaquez. He died in Ector County 21 May 1999. They had five children:

A. Daughter Rosea Holguin was born in Pecos County November 19, 1934.

8. Son Roberto Holguin Bernard was born on 4 January 1906 in Texas. He was baptized on April 23,1906 in Big Bend, Texas by Father Brocardus from St. Joseph’s Catholic Church in Fort Davis. His godparents were Federico Villalba and Maria Cortez.  In 1910 he was living in the Terlingua area with his parents. He married Manuela Jaquez circa 1926. He was a resident of Imperial, Texas and was employed as a truck driver when he died on January 1, 1949 of a brain tumor. (He died in Santa Rosa Hospital in San Antonio, Texas.) He was buried in Monahans, Texas on January 2, 1949. Roberto and Manuela had six children:

A. Daughter Faustina Bernard was born July 29, 1927 in Imperial. She died in Bell Hospital, Monahans of rheumatic fever on April 14, 1951 and is buried in Monahans Memorial Cemetery. She was employed as a clerk in a lumber office prior to her death.

B. Daughter Gloria Jaquez Bernard was born on July 12, 1932 in Pecos County, Texas.

D. Son Robert Bernard was born on October 28, 1937 in Imperial, Texas. His wife’s name was Eva (family name unavailable). Robert died at his residence in Odessa, Texas on December 2, 2009 and is buried in Sunset Memorial Garden. Robert and Eva had two children:

E. Son Juan Bernard was living in Odessa in December 2009.

F. Daughter Victoria Bernard was living in Odessa in December 2009. Her married name is Navarrete.

9. Daughter Margarita Bernard was born on March 8, 1907 in Texas.  She was baptized on May 2, 1907 in Terlingua, Texas by Father Brocardus from St. Joseph’s Catholic Church in Fort Davis. Her godparents were Francisco Jaquez and Nieves Samaniego. In 1910 she was living in the Terlingua area with her parents. Circa 1937 she married Luciano Holguin, the son of Silvestre Holguin and Antonia Jaquez. Margarita died December 16, 1987 and Luciano died March 15, 2000. Both are buried in Imperial Cemetery. 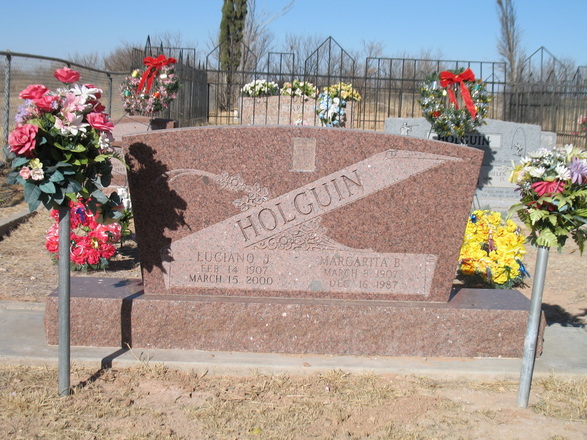 Margarita and Luciano had ten children:

C. Daughter Zenaida Holguin was born on 5 June 1938 in Pecos County. In May 2002 she was living in Lovington, NM. Her married name is Aranda.

F. Daughter Margarita Holguin was born on 16 February 1944 in Pecos County. In May 2002 she was living in Imperial. Her married name is Acosta.

H. Son Cipriano Holguin was living in Odessa in May 2002.

I. Son Luciano Holguin was living in Odessa in May 2002.

10. Son Francisco Bernard was born on 22 July 1909 in Texas.  He was baptized on 3 November 1909 in Chisos, Texas by Father Brocardus from St. Joseph’s Catholic Church in Fort Davis. His godparents were Ponciano Porras and Natividad Gomez. In 1910 he was living in the Terlingua area with his parents. He moved with the family to Imperial and married Juliana Holguin, daughter of Silvestre Holguin and Antonia Jaquez. Francisco died 31 May 1988 in Monahans. Francisco and Juliana had 13 children:

C. Daughter Carlota Bernard was born 11 September 1934. She married Miguel Reyes. In April 2009 they were living in Midland.

E. Daughter Elodia Bernard was born 4 July 1938. She married Roy Rubio and in April 2009 they were living in San Angelo.

F. Daughter Teresa Bernard was born 2 Dec 1940 in Imperial. She died 8 February, 1941 in Imperial of measles and is buried in Buena Vista Cemetery.

G. Daughter Maria Refugio Bernard was born 15 March 1942. She died 19 May 1943 of a middle ear infection in Fort Stockton, where he parents apparently had taken her for medical attention. She is buried in Buena Vista Cemetery.

I. Daughter Elvira Bernard was born 21 May 1946. She married Sergio Hernandez and in April 2009 they were living in Monahans..

J. Daughter Lucia Bernard was born 26 September 1947. She married Adolfo Chavez. They are divorced. Later she married Rey Martinez and in April 2009 they were living in Monahans.

K. Daughter Elisa Bernard was born 15 January, 1949. She married Apolinar Martinez and in April 2009 they were living in Monahans.

L. Daughter Bessie Bernard was born 4 September, 1950. She married Jose Angel Vargas and in April 2009 they were living in Monahans.

(a).  The information on baptisms is based on records from St. Joseph's Catholic Church, Fort Davis, which was the home church of the priest who visited the South County area about twice each year. For the first 6 years the only southern Brewster County locations shown in the records were Terlingua, Lajitas and San Vicente. In 1906 "Bigbend" started to appear, referring to the Study Butte area, and in 1908 "Chisos" started to appear, obviously referring to present-day Terlingua. Until about 1910, Terlingua was at the Mariposa Mine area.

(b).   No apparent relationship to Carlota Holguin.