Gregorio Jaquez Family History
A Documented Research Report by Bob Wirt
Version 1, April 5th, 2011
Gregorio Jaquez was born in Ojinaga, Chihuahua, Mexico in 1841. He was the son of Anastacio Jaquez and Guadalupe Alascon He married Zapopam Acosta January 8, 1866 in Jesus Nazareno Church in Ojinaga. She was born in Ojinaga in 1846, the daughter of Crisanto Acosta and Juana Carnero. (For more information on the Acosta family see http://www.lifebeforetheruins.com/francisco-acosta.html ). In 1880 they were living in Polvo (now Redford), Texas where Gregorio was working on a ranch. By about 1905 they had moved to Terlingua and lived there until their deaths. Gregorio died April 29, 1930 in Terlingua and Zapopam died there January 24, 1931. Both are buried in the Terlingua Cemetery. Gregorio and Zapopam had three children:

1.      Son Rumaldo Jaquez was born in Texas in 1866. In 1880 he was living in Polvo with his parents. Circa 1890 he married Severa O. Contreras, the daughter of Lino Contreras and Juana Gonzalez. She was born in Mexico February 8, 1866. The couple lived in the Polvo area until 1899, but probably moved to the Lajitas-Terlingua area soon afterward. In 1910 Rumaldo was working in the mercury mines, according to the census, and between 1916 and 1918 he worked in some capacity for the Chisos Mining Co. Between December 1917 and June 1918 he hauled nearly 26 tons of freight for the Study Butte Mining Co., earning $317.86. Rumaldo died in Terlingua October 14, 1931 and probably is buried there. Severa died in El Paso March 27, 1945 and is buried in Concordia Catholic Cemetery, El Paso. Rumaldo and Severa had five children:

A.      Daughter Luisa Jaquez was born in Presidio, Texas August 25, 1891. She married Alberto Molinar July 10, 1912. Alberto was the son of Victoriano Molinar and Jesus Baeza. They had twelve children. For details on Luisa and Alberto, and for additional information on the Molinar family, see http://www.lifebeforetheruins.com/antonio-molinar.html.

B.      Son Agapito Jaquez was born in Redford, Texas September 29, 1892. By 1910 he was living in the Terlingua area with his parents and was working as a laborer. On September 12, 1914 he married Ofelia Rodriguez in Terlingua. She was born September 24, 1899 in San Carlos, Chihuahua, Mexico, the daughter of Jesus Rodriguez and Victoria Granado. From 1915 until 1941 Agapito worked for the Chisos Mining Co. In 1941 he registered for the World War II draft, but was not called into the service. From 1944 until his death in 1962 Agapito and his family lived in Odessa. Ofelia died of a stroke in Medical Center Hospital June 2, 1955. Agapito died of lung cancer in the same hospital May 24, 1962. Both are buried in the Odessa Cemetery. Agapito and Ofelia had six children:

(1)   Son Alberto R. Jaquez was born in Terlingua (Chisos) December 19, 1915. He was baptized April 2, 1916 in Chisos by Father Manuel Cuadrado from St. Agnes Church in Terlingua. His godparents were Jose Hinojos and Victoria Madrid. He married Maria Gonzalez in Terlingua September 19, 1936. She was the daughter of Filberto Gonzalez and Benigna Molinar. Alberto was working for the Rainbow Mine in Terlingua in April 1941. From 1967 until their deaths the couple lived in Kermit, Texas. . Maria died in Medical Center Hospital in Odessa June 20, 1988. Alberto died December 2, 1991. They are buried together in Kermit Cemetery along with son Alberto Jr. 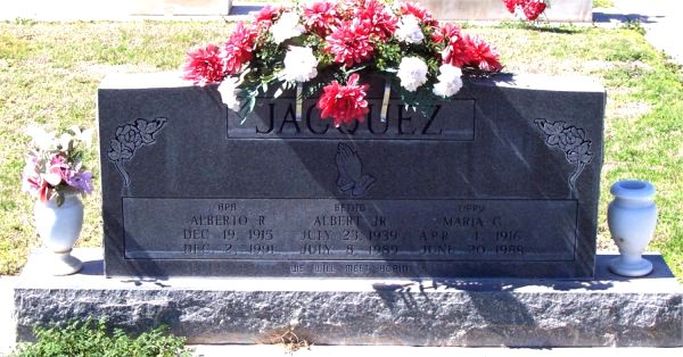 E.      Daughter Conrada Jaquez was born in Lajitas February 19, 1903. She was baptized in Lajitas 16 May 1903 by Father Brocardus. Her godparents were Macario and Severiana A. Hinojos. She married Eduardo Molinar in Terlingua June 4, 1922. He was born 30 November 1900 in Shafter, Texas, the son of Victoriano Molinar and Rosaria Galindo Mesa. Eduardo died in Alpine 24 August 1971 and is buried in Holy Angels Cemetery. She died in Valley Star Nursing Home in 1987 and is buried in Holy Angels Cemetery. Conrada and Eduardo had thirteen children. For details, and for additional information on the Molinar family, see http://www.lifebeforetheruins.com/antonio-molinar.html.

2.      Daughter Juana Jaquez was born circa 1871 and was living with her parents in Polvo in 1880. No additional information is available on Juana.

3.      Daughter Francisca Jaquez was born circa 1896 in Texas. She married Jose Angel Hinojos. Francisca died February 18, 1935 in Terlingua and was buried there the following day by her husband.

Copyright 2011 by Bob Wirt; all rights reserved.
This work may not be copied or used in whole or part for publication without the written consent of the author.
Individuals may use this information freely to develop and maintain family histories for their personal use.