1. Daughter Facunda Gallegos was born in Sep 1889 in Texas. In 1900 she was living with her parents in Fort Stockton, Texas. On May 3, 1908 she was the godmother of Maria Leyva (a), baptized in Terlingua. Facunda married Bernardo Martinez Luitt April 15, 1915 in San Angelo. They were married by Justice of the Peace F.A. Branch. 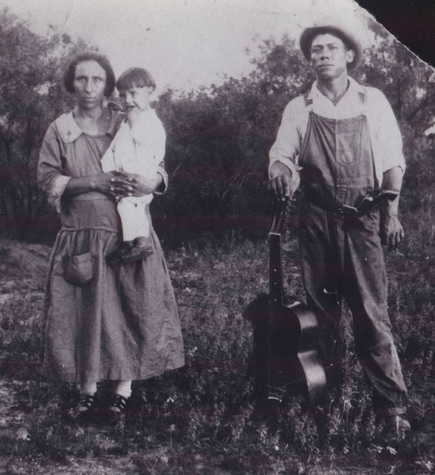 Facunda,  holding Cecilio, and Bernardo
Facunda and Bernardo had four children:
A.   Daughter Manuela Luitt was born June 5. 1919 in Fort Stockton. On November 4, 1935 she married Candido Luna in Alpine and they had six children. For details, and more information on the Candido Luna family, see http://www.lifebeforetheruins.com/candido-luna-sr
B.   Daughter Monsimonia “Trinidad” Luitt was born in Benjamin, Texas August 22, 1921. She married Carlos Chavez January 13, 1941 in Alpine and they had three children  See http://www.lifebeforetheruins.com/encarnacion-chavez.html for details and for more information on the Chavez family.
C.   Son Cecilio Luitt was born in Colorado, Texas November 22, 1924. He died in Alpine on April 2, 1947 of pulmonary tuberculosis. He is buried in Alpine. Cecilio married Rosa Luna, daughter of Rebeca Luna November 4, 1935 in Our Lady of Peace Catholic Church in Alpine. They were married by Rev. James Conyellos. Cecilio and Rosa had one child:

2.    Son Simon Gallegos was born in Texas in 1890. In 1900 he was living with his parents in Fort Stockton, Texas. In August 1916 he was employed briefly by the Study Butte Mining Co., working six shifts in the mine at $1.25 per shift. He died on 29 January 1919 in Leon Valley, Pecos Co. of Spanish Influenza and is buried in the Catholic Cemetery in Fort Stockton.

3.    Daughter Maria Gallegos was born in Texas in May 1892. In 1900 she was living with her parents in Fort Stockton, Texas. She married Eugenio Gonzales in Terlingua 9 June 1910.  They were married by C.A. Hawley, Justice of the Peace for the Terlingua area. They had two children:
A.   Son Marcelino Gonzales was born April 26, 1912, probably in Terlingua. From at least 1934 to 1938 he worked as a miner in the Terlingua area. He died April 27, 1938 in Alpine of pulmonary tuberculosis and is buried in Alpine.
B.   Son Gabriel Gonzales was born in Terlingua October 26, 1916. He was baptized in Chisos January 18, 1917 by Father Antonio Alonso. His godparents were Leonides Hernandez and Valentina Gallegos.

Maria Gallegos married Antonio Orozco July 31, 1918 and they had one child:
A.   Daughter Guadalupe Orozco was born circa 1920 in Texas.

4.    Daughter Dominga Gallegos was born May 12, 1895 in Texas. In 1900 she was living with her parents in Fort Stockton, Texas. She married Manuel Luna in Terlingua March 29,  1916. He was born circa 1894 in Texas, the son of Alejandro Luna and Antonia Lujan. Dominga and Manuel were married by Father Manuel Cuadrado. They were living in Alpine in 1930. Dominga died on 1 January 1954 in Alpine of coronary thrombosis and is buried in Alpine. For more information on Manuel Luna and the Alejandro Luna family see http://www.lifebeforetheruins.com/alejandro-luna.html

6.    Daughter Hipolita Gallegos was born 14 September 1899. She was baptized in Fort Stockton on October 1, 1899 by Father Brocardus. Her godparents were Refugio Torres and Brigida Sanchez. On April 14, 1918 she married Luis Luna in Terlingua. They were married by Father Antonio Alonso. Hipolita died soon after the marriage. For more information on Luis Luna, see http://www.lifebeforetheruins.com/alejandro-luna.html 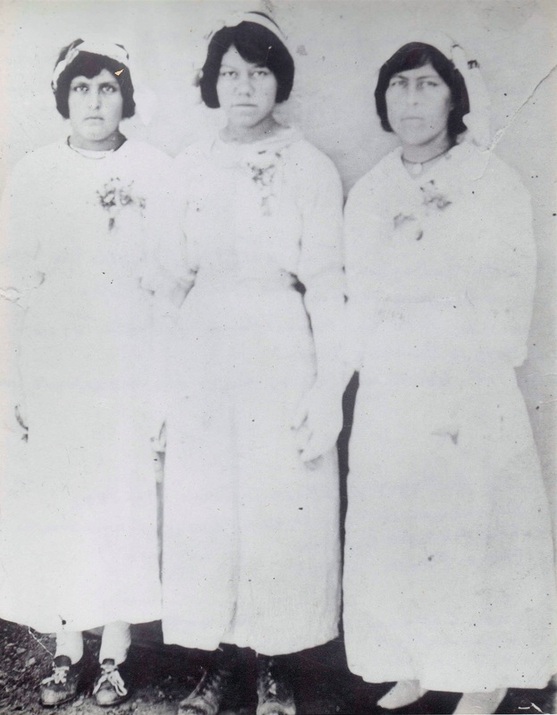 Fidencia, Hipolita and Maria Gallegos
7.    Daughter Fidencia Gallegos was born November 16, 1902, in Terlingua de Abajo was baptized there May 17, 1903 by Father Brocardus. Her godparents were Basilio Fuentes and Francisca Algarte. She married Jose Luna December 17, 1921 in Terlingua de Abajo. The ceremony was performed by Father Max Weyert from St. Agnes Catholic Church in Terlingua. Jose was the son of Alejandro Luna and Antonia Lujan. Fidencia and Jose had two children. Fidencia died on April 4. 1933 in Alpine of tuberculosis and is buried in Alpine. 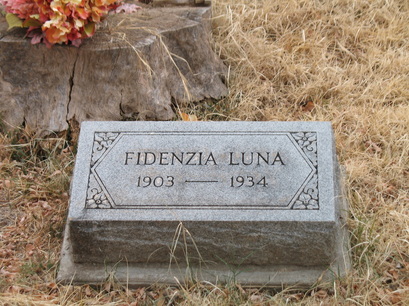 Additional information on Jose Luna and the children can be found in http://www.lifebeforetheruins.com/alejandro-luna.html

8. Son Gregorio Gallegos was born March 12, 1904 in the Terlingua area. He was baptized in Terlingua on May 2, 1904 by Father Brocardus. His godparents were Encarnacion Ochoa and Ramona Catano.Note:

(a) Daughter of Sixto Leyva and Adelaida Talamantes.