Francisco Ortiz López was born circa 1865 in Mexico, the son of Francisco Lopez
In 1901 Francisco and his family immigrated to the United States and settled in the southwestern part of Terlingua de Abajo in a house built for them the previous year by Cecilia’s father Esiquio. This house is designated TA-29 in the Big Bend National Park inventory of Terlingua de Abajo structures. Francisco farmed in the area, apparently on a fairly large scale, and was involved in the construction of the extensive canal system that was used to irrigate the area. The 1910 and 1920 census records show Francisco’s occupation as “farmer”.
Francisco O. Lopez continued farming in Terlingua de Abajo until the mid 1920’s. He then moved about five miles up Terlingua Creek where he leased or rented land from Valentine Rodriguez. He probably farmed and raised goats on that land through at least 1930. In the 1930 census his occupation is shown as “Manager, goat ranch.”

The children of Francisco and Cecilia were:

1.    Son Juan Espinosa was born April 9, 1894 in Sierra Mojada, Coahuila, Mexico. He immigrated to the United States with the family in 1901 and was living with Francisco in Terlingua de Abajo in 1910. He married Bartola Pardo February 20, 1921 in Terlingua. She was born August 24, 1897 in Sierra Mojada, Coahuila, Mexico, the daughter of Pedro Pardo and Angela Espinosa. Father Max Weyert, from St. Agnes Church in Terlingua, led the ceremony and Agapito and Mauricia Martinez were the witnesses. At least through 1929 Juan and his family remained in the Terlingua area, where he worked as a farm laborer. In 1945 Juan was living in Alpine, Texas. He died in Alpine on March 13th, 1947 of acute rheumatic fever. Bartola died in Big Bend Memorial Hospital, Alpine of Uremia December 13, 1974. Both are buried in Holy Angels Cemetery.

E.    Daughter Martina Espinosa was born in Brewster County January 2, 1933. She married Manuel Chavez October 27, 1951. They had one child:
(1)   Daughter Yolanda Chavez. She was deceased by July 2010. Her married name was Molina.
2.     Daughter Marcelina Espinosa was born circa 1897 in Mexico. She immigrated to the United States with the family in 1901. She was living with Francisco in Terlingua de Abajo in 1910 but no further information on her has been found.

3.     Son Isabel Espinoa was born July 8, 1898 in Sierra Mojada, Coahuila, Mexico. He immigrated to the United States with the family in 1901 and was living with Francisco in Terlingua de Abajo in 1910. He married Maria Pardo March 13, 1921 in the Terlingua area (a). This was their Catholic Church wedding; they very likely were married earlier in a civil ceremony. Maria was the daughter of Pedro Pardo and Angela Espinosa. By June 1921 Isabel was working for the Chisos Mining Co. and was still working as a miner when he died. He died of tuberculosis on August 11 1934 and is buried in the Terlingua Cemetery. Isabel and Maria had three children:
A.. Son Inez Espinosa worked as a miner from 1929 to 1939. He died of pneumonia and tuberculosis in Alpine January 8, 1942. He was a resident of Terlingua when he died and apparently was taken to Alpine for treatment. He is buried in El Camposanto del Arroyo (also known as the Big Bend Cemetery and the 248 Cemetery) near Terlingua. His grave is marked with a stamped metal disc. He married Tomasa Rodriguez August 26, 1933 and they had one child:
(1) Daughter Juanita Espinosa was born May 6, 1939 in Texas. She died in Western Clinic and Hospital in Midland February 8, 1944 and is buried in Midland.
B.  Daughter Margarita Espinosa was born June 8, 1921 in Terlingua.
C.  Son Octaviano Espinosa was born November 8, 1923 in Terlingua de Abajo.


4.     Son Doroteo Lopez was born circa 1901in Terlingua de Abajo. He was still living with Francisco in 1920, when he was working as a general laborer, according to the census. No further information on him has been found.

5.     Daughter Santiaga Lopez was born circa 1903 in Terlingua de Abajo. She was baptized on October 17, 1903 in Terlingua by Father Brocardus. Her godparents were Fermin Lujan and Severiana Ramirez. She was still living with Francisco in 1920. From 1931 to 1974 she was a resident of Fort Stockton. She died in Comanche View Nursing Home January 4, 1974 and is buried in St. Joseph’s Catholic Cemetery, Fort Stockton. She married Esteban Urbina, who was born November 26, 1882. He died in Big Spring State Hospital April 13 1962 and is buried in the hospital cemetery. Santiaga had one child out of wedlock:
A.    Son Nicolas Lopez was born in Terlingua September 10, 1921. Nicolas was a U.S. Army World War II Veteran. He married Juliana Flores October 13, 1941. She was born in Terlingua December 22, 1922, the daughter of Carlos Flores and Jova Martinez. Nicolas died in Pecos County Memorial Hospital, Fort Stockton November 7, 2001. Juliana died in Fort Stockton March 19, 2010. Both are buried in St. Joseph’s Catholic Cemetery. Nicolas and Juliana had six children:
(1)   Daughter Estefana Lopez was born November 28, 1944 in Brewster County. Her married name is Martinez. In March 2010 she was living in Fort Stockton. 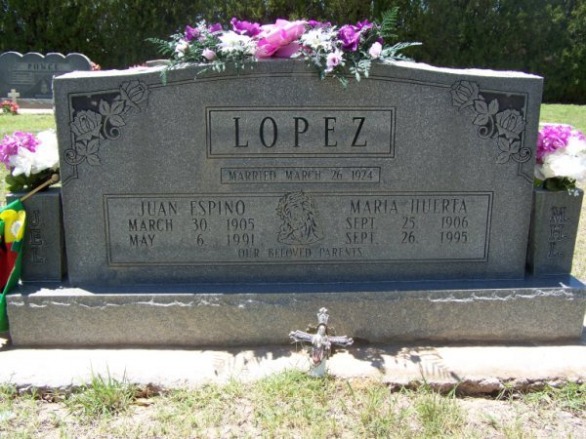 Francisco O. Lopez’s first wife, Cecilia, died in 1905 while giving birth to their son Juan. Circa 1907 Francisco married Filomena Mani. She also had been married previously and brought with her two children from her first marriage. They were Marcelino Vasquez and Modesta Vasquez.

(a)  In records on this family, the family name frequently is shown as Espinosa or Espinoza.
(b)   Recorded in the records of St. Agnes Catholic Church in Terlingua, but the site of the event was not given.