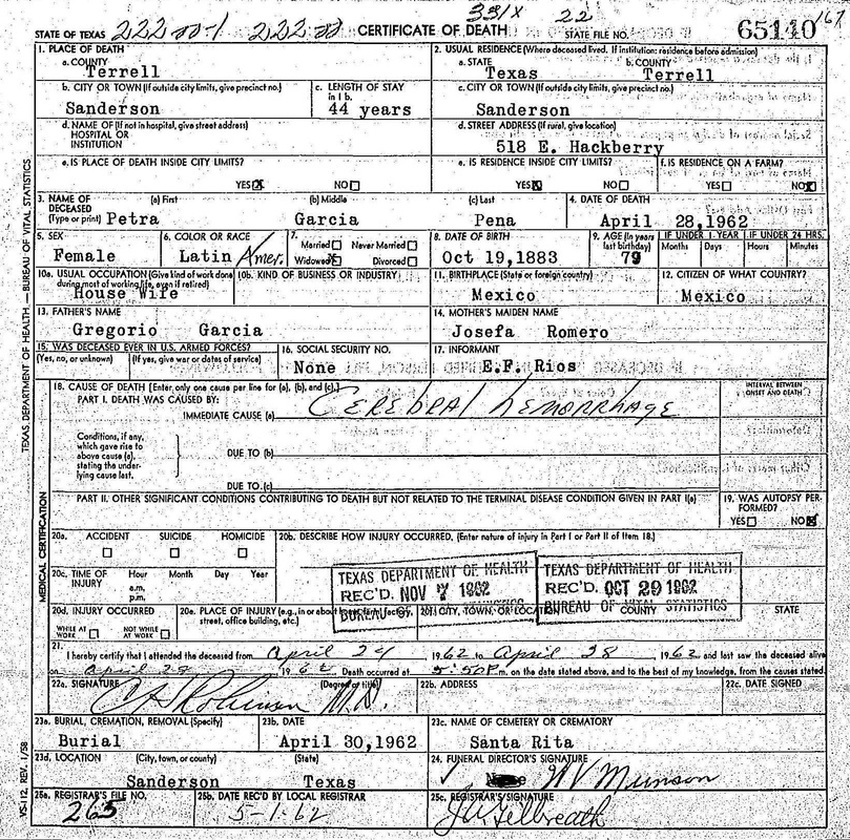 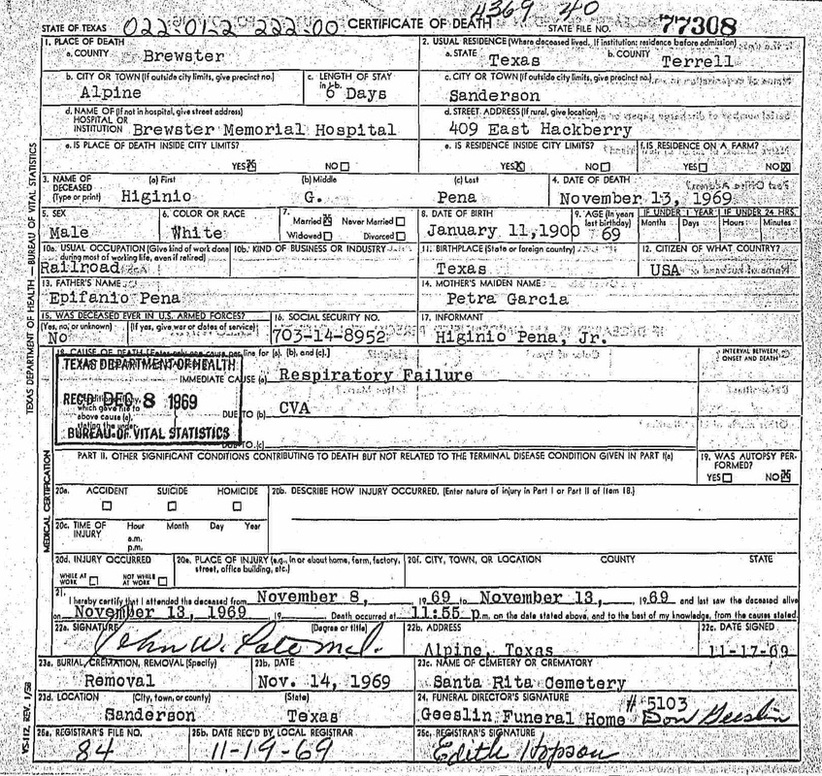 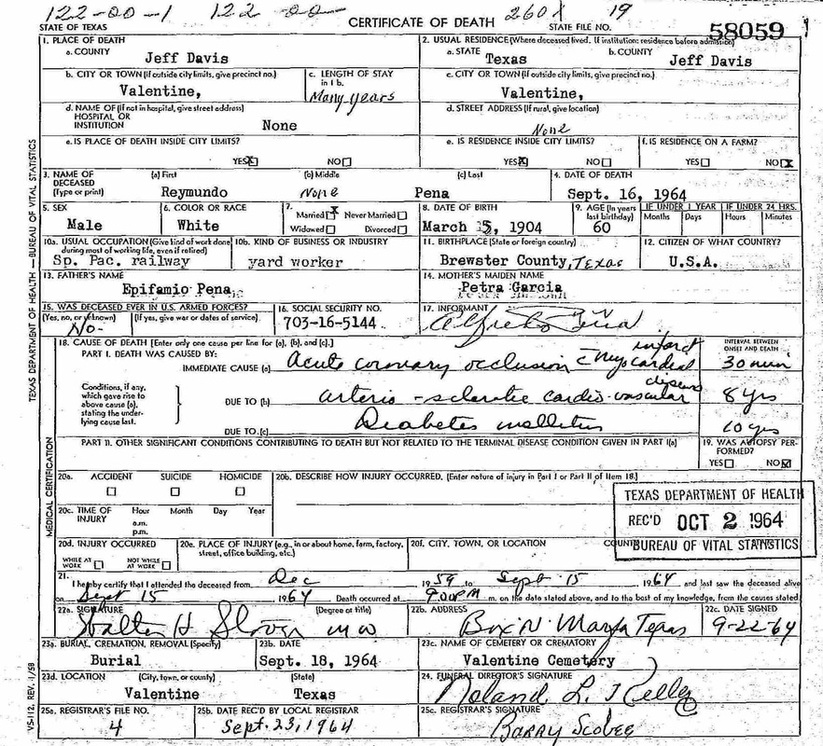 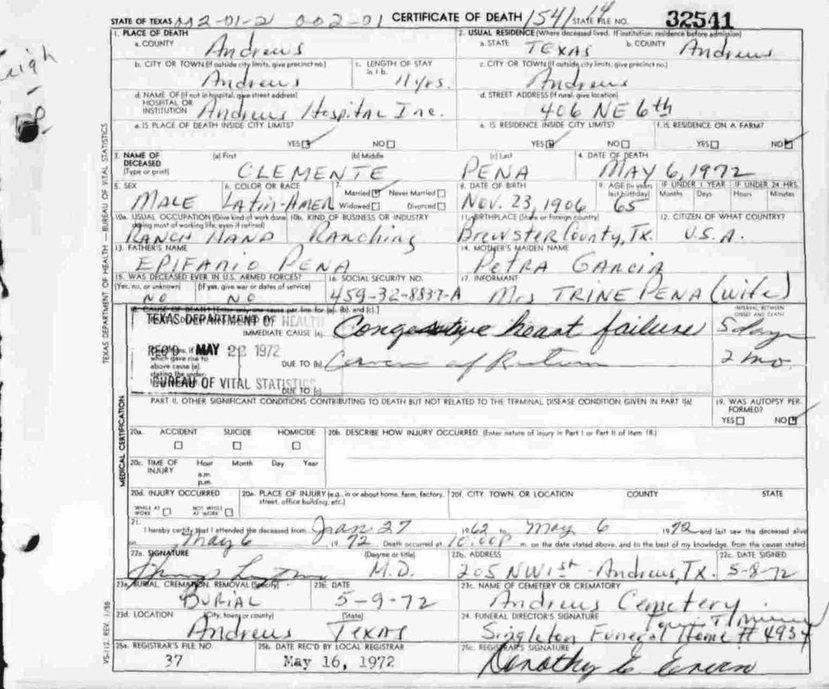 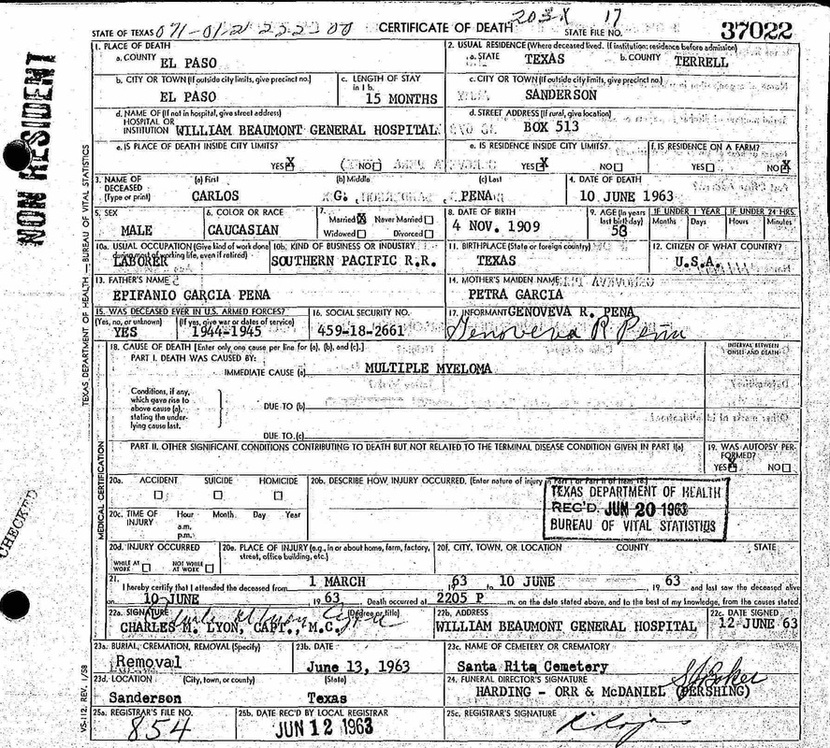 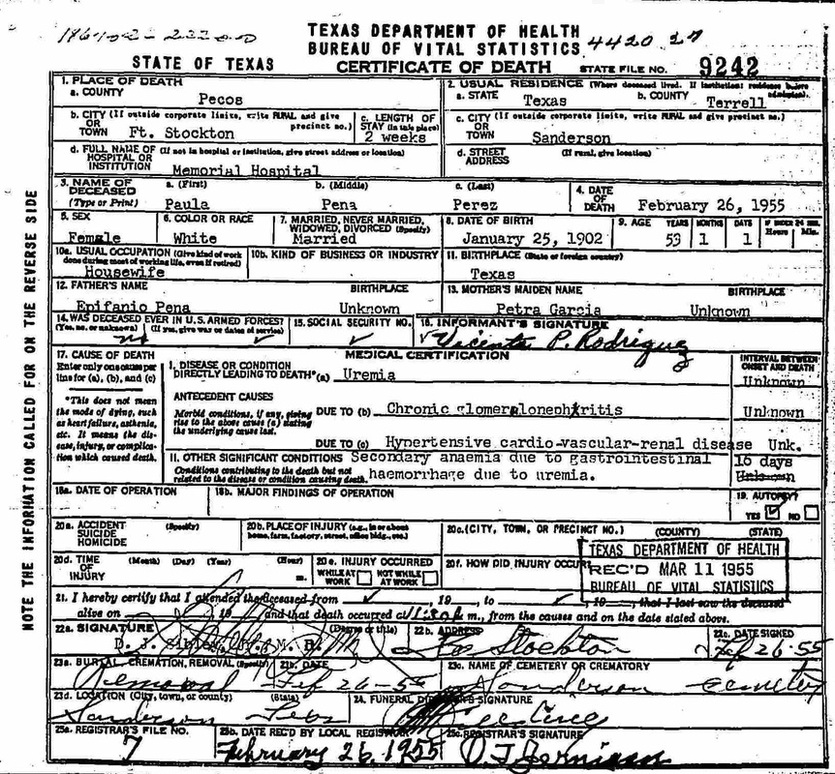 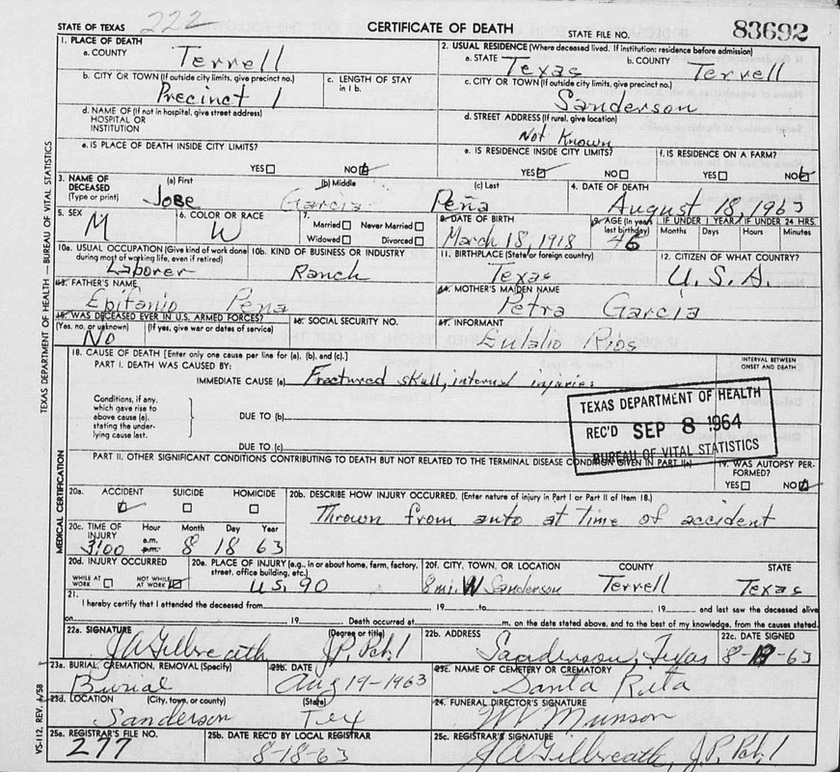 Funeral rites were in the St. James Catholic Church Saturday (15 Nov 1969) afternoon for Higinio Pena, 69, who died Thursday (13 Nov 1969) in an Alpine hospital where he had been a patient for five days. Rev. Ted McNulty officiated at the rites and burial was in the Santa Rita Cemetery directed by the Geeslin Funeral Home of Alpine.

He was born in San Vicente on January 11, 1900, and was married to Vicenta Bravo on September 23, 1932, in Sanderson. He was employed by the Southern Pacific Railroad here in the water service from 1919 until 1959. He had been in failing health for a number of years.

Besides his widow, he is survived by a son, Higinio Pena Jr., of Alpine; three daughters, Mrs. Sylvestre Silvas and Mrs. Ramona Olivares of Sanderson and Mrs. David Hernandez Jr. of Casa Grande, Ariz. ; a sister, Mrs. Eulalio Rios of Sanderson; three brothers, Juan and Leonardo Pena of Sanderson and Clemente Pena of Andrews; also 12 grandchildren.

He was born June 28, 1914 in Boquillas, Mexico and was a lifelong resident of Sanderson.

He served in World Was II and worked on area ranches for many years. He was a member of the Guadalupanos and Holy Name Society and St. James Catholic Church.

Survivors included his wife, Lucia Pena of Sanderson; a son, Juan Jose Pena of San Angelo and one grandchild.

A homemaker, she was a lifelong member of the Guadalupanas at St. James Catholic Church.

Survivors include one son, Johnny Pena of San Angelo; two sisters, Lupe C. Hernandez and Cipriana Garcia, both of Indio, CA; four brothers, Honorato Garcia of McCamey and Pedro Garcia, Salvador Garcia, and Julian Rico, all of Indio, CA, and one grandchild.

The Rosary service will be said for Carlos Pena Thursday evening at 7:00 o’clock at his home here in Sanderson. Funeral services at 9:00 a.m. Friday from St. James Catholic Church and burial in Santa Rita Cemetery will follow, with all services under the direction of Rev. N. Femenia.

Mr. Pena died in an El Paso hospital Tuesday morning early after a long illness. His body was returned to Sanderson Wednesday night by train.

Pena was born November 4, 1909, in Boquillas, Texas to Mr. and Mrs. Epifanio Pena. He came to Sanderson in 1918 and worked on ranches for a while before going to work for the railroad in 1938. Ill health forced his retirement in 1960.

On May 28, 1929, he was married to Genaveva Rodriguez in Sanderson.

He is survived by his widow and the following children: Ascension Pena who lives in El Paso, and Miss Marcellina Pena, Humberto Pena, Guillermo Pena, and misses Margarita, Mary, and Lupe, all of Sanderson; brothers Felipe, Higinio, Reymundo, Clemente, Jose, Leonardo; a sister Mrs. Eulalia Rios; and three grandchildren.