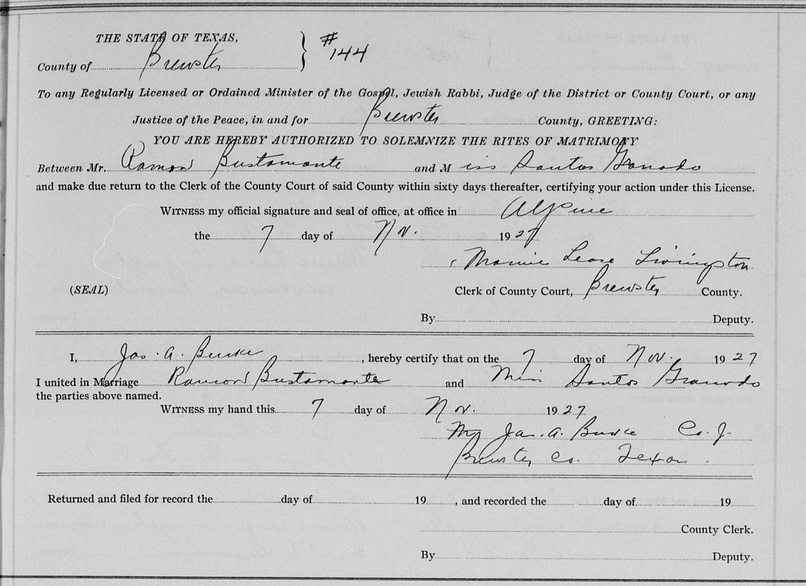 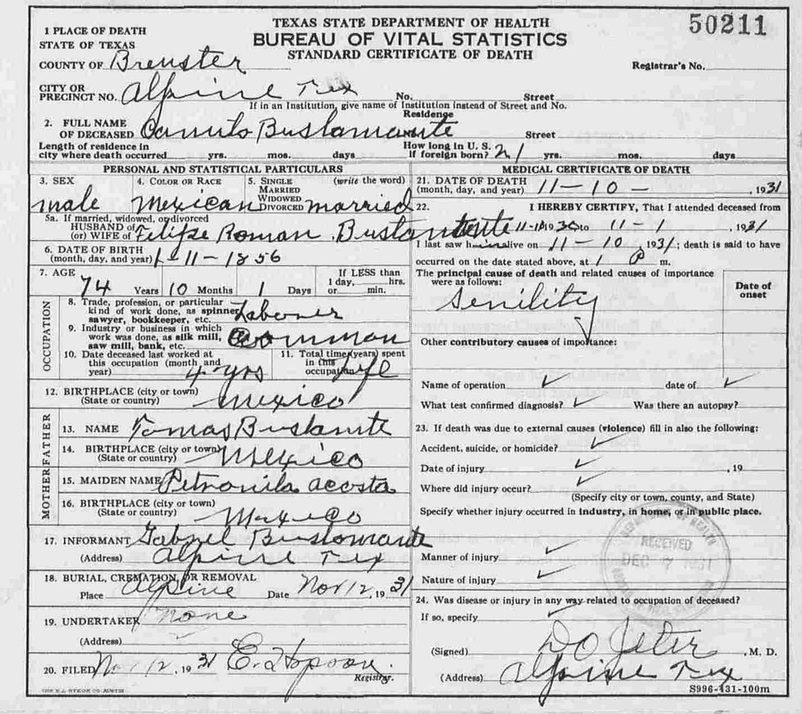 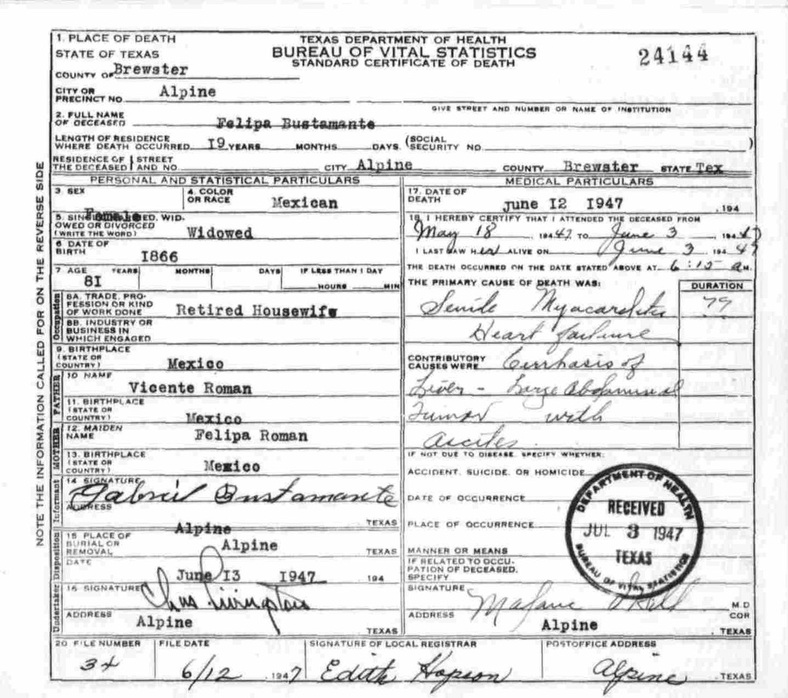 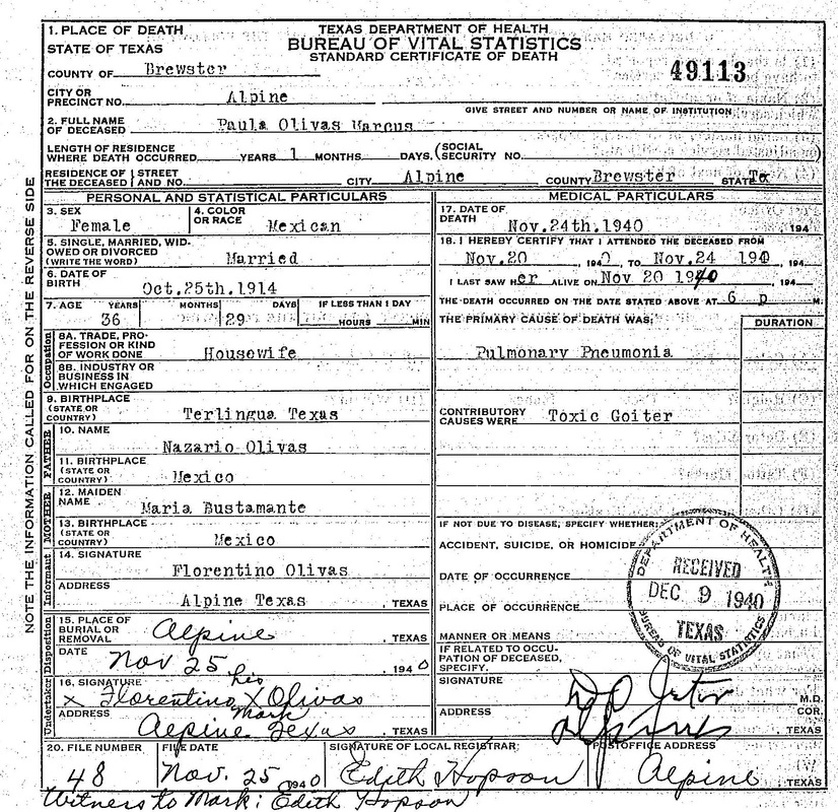 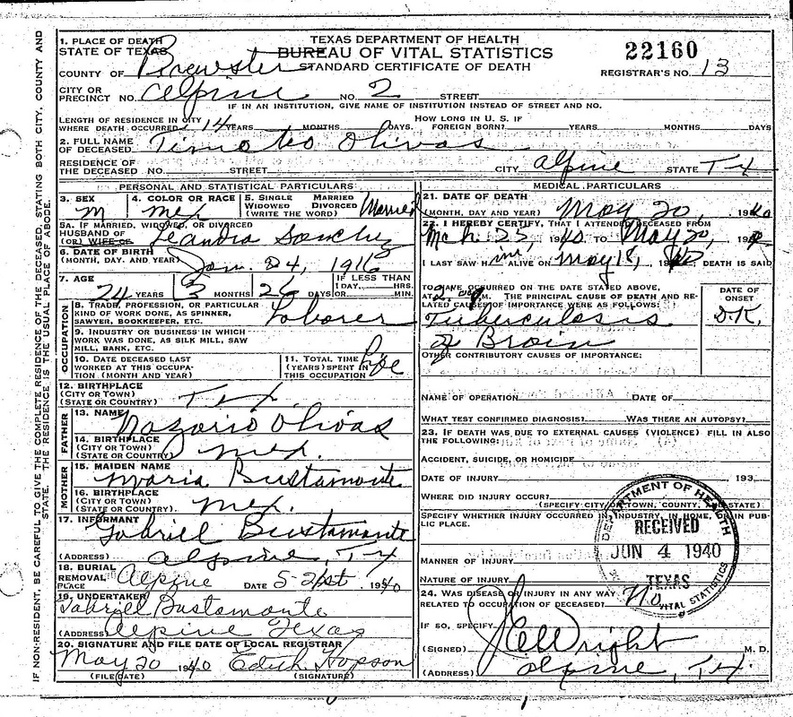 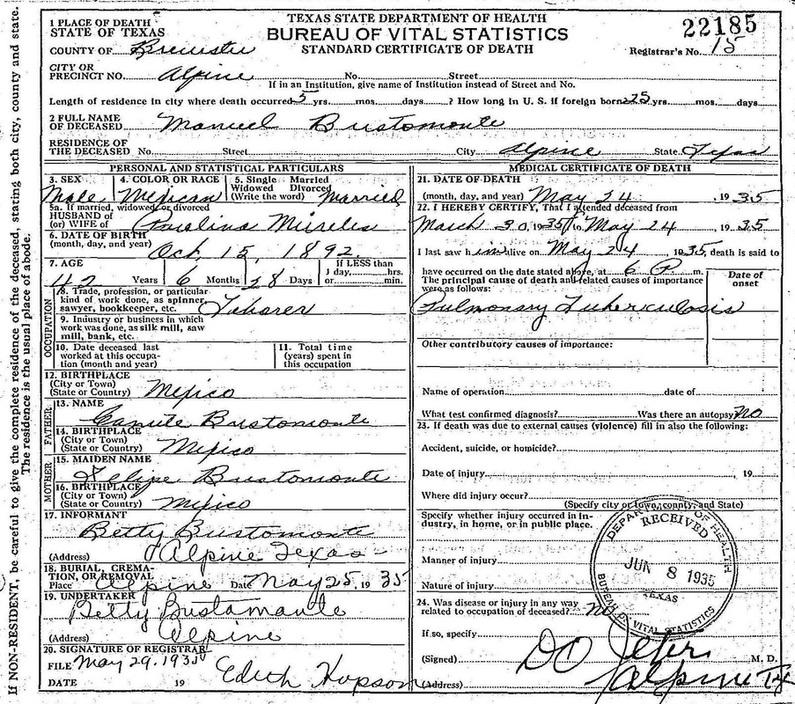 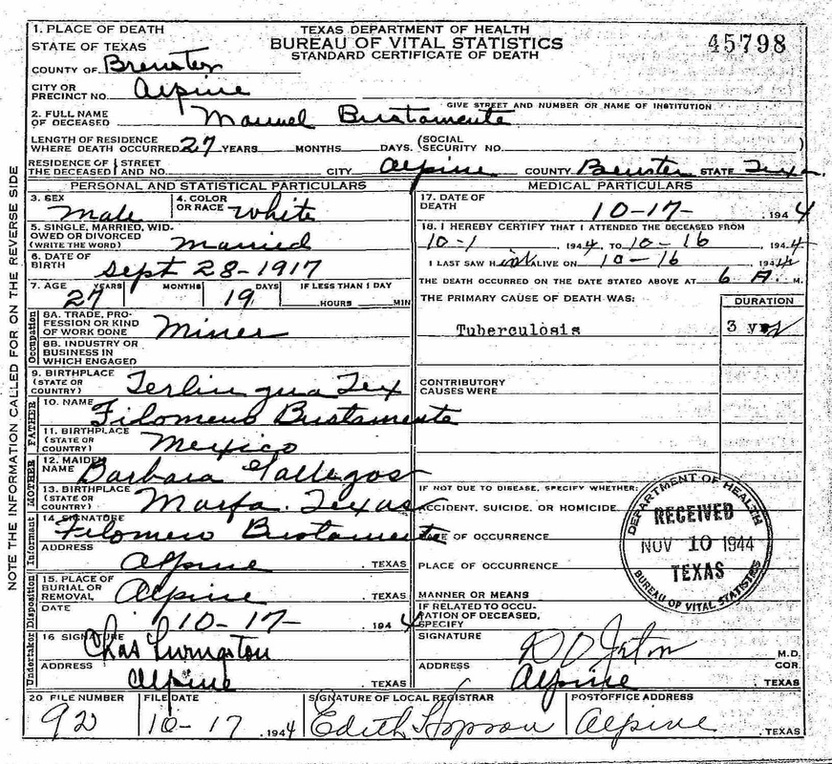 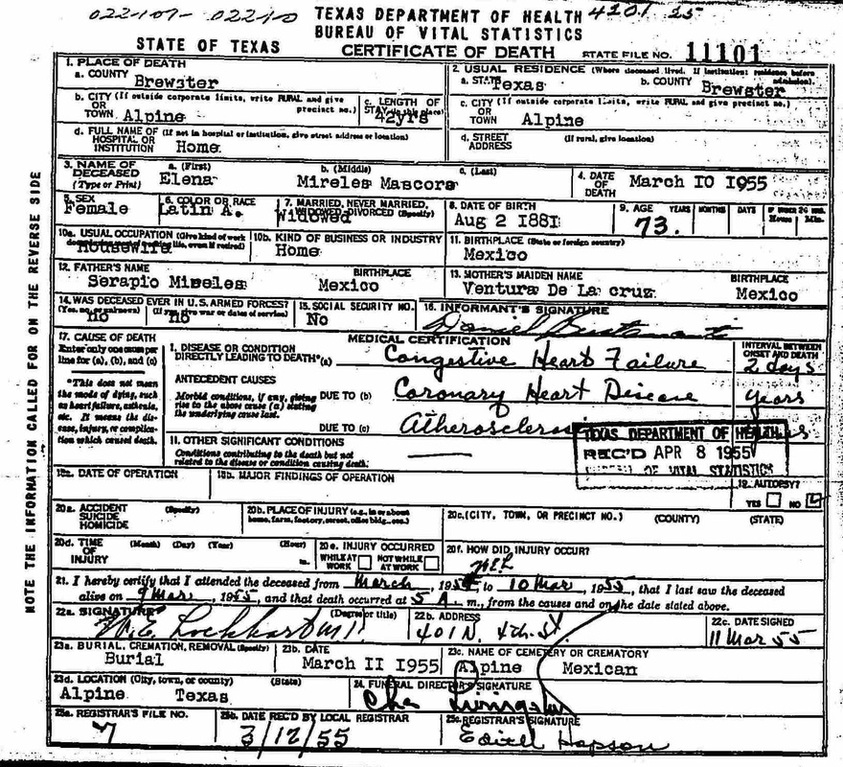 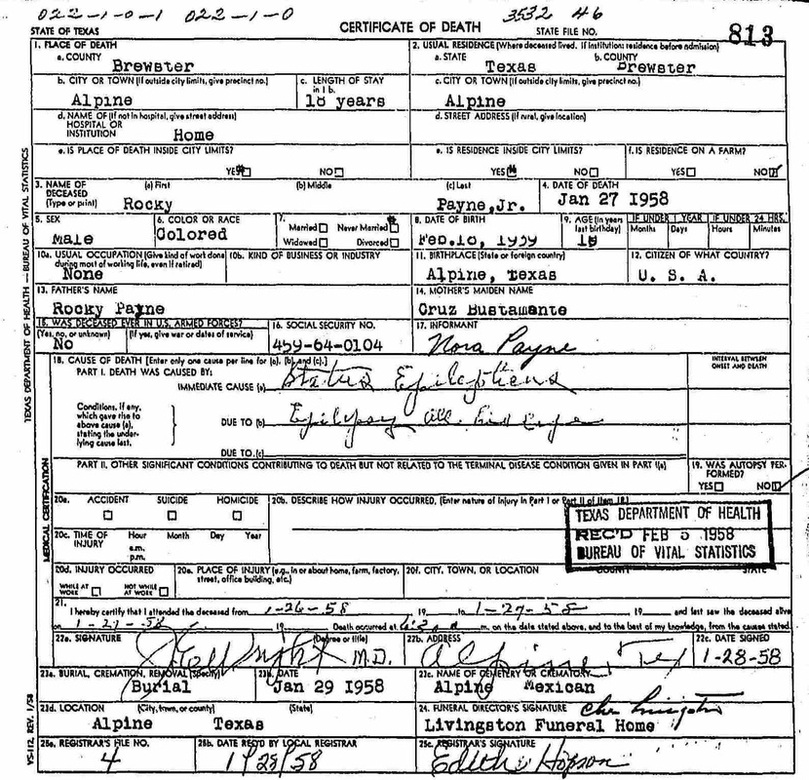 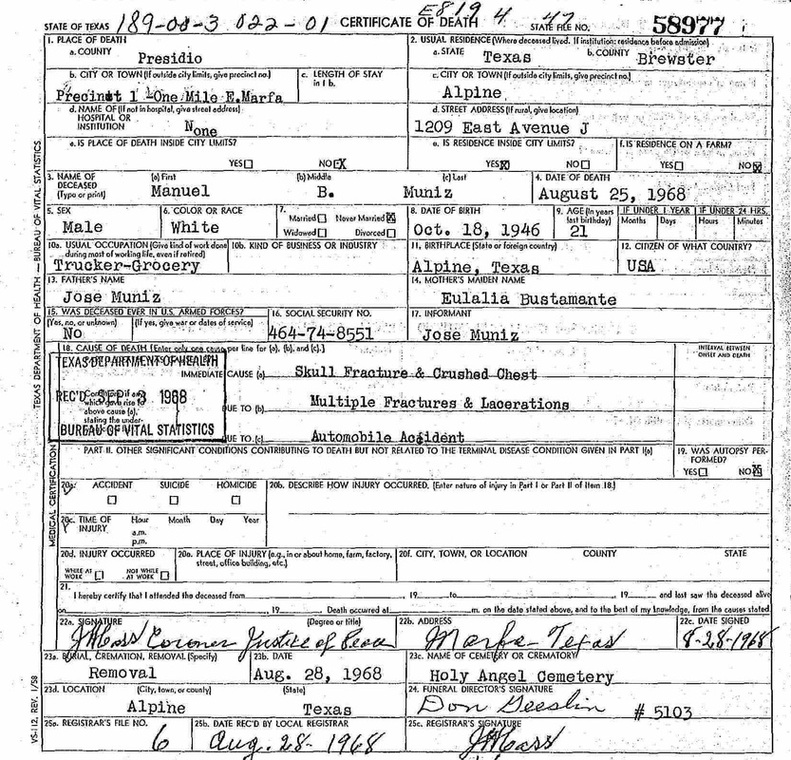 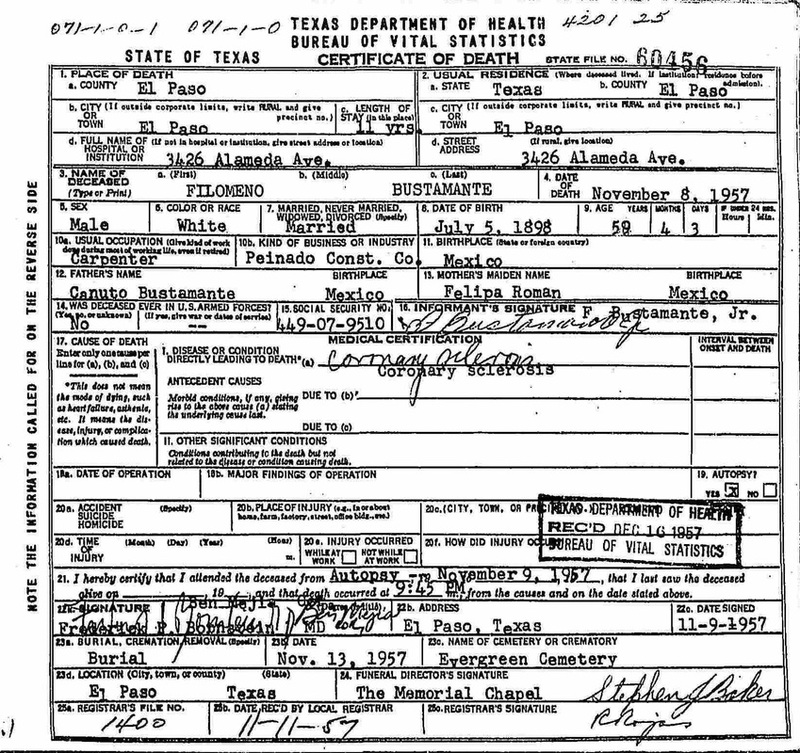 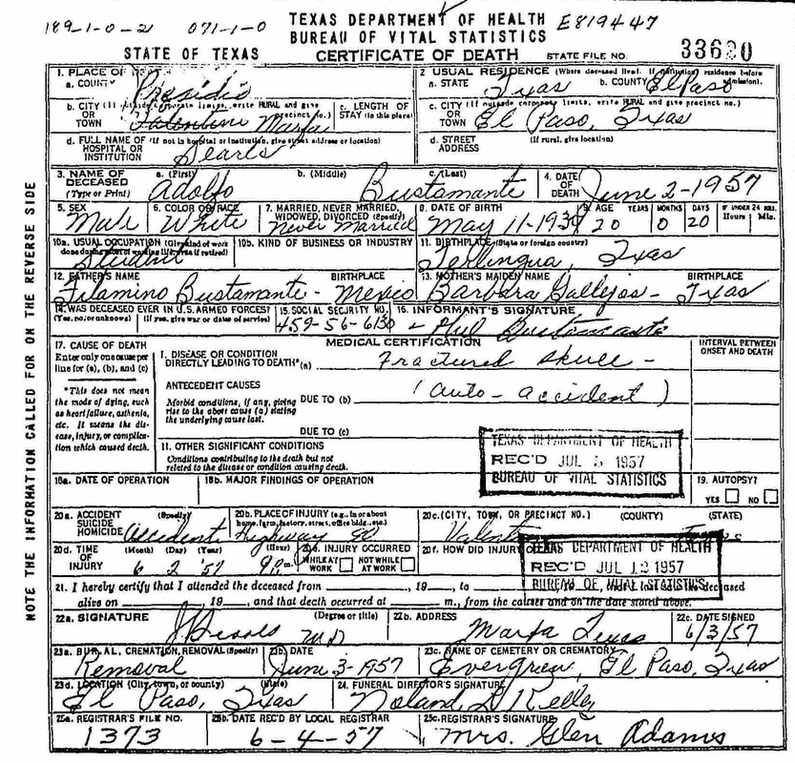 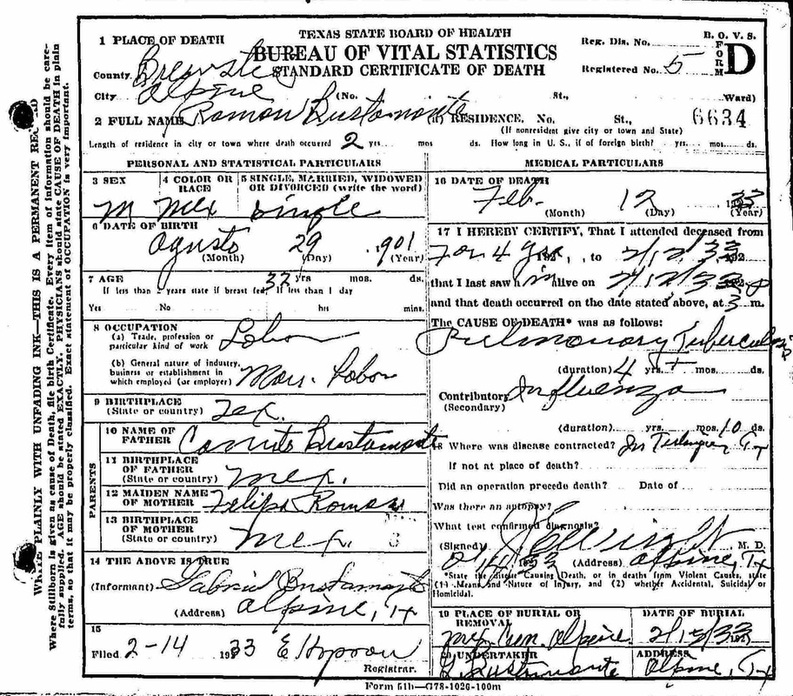 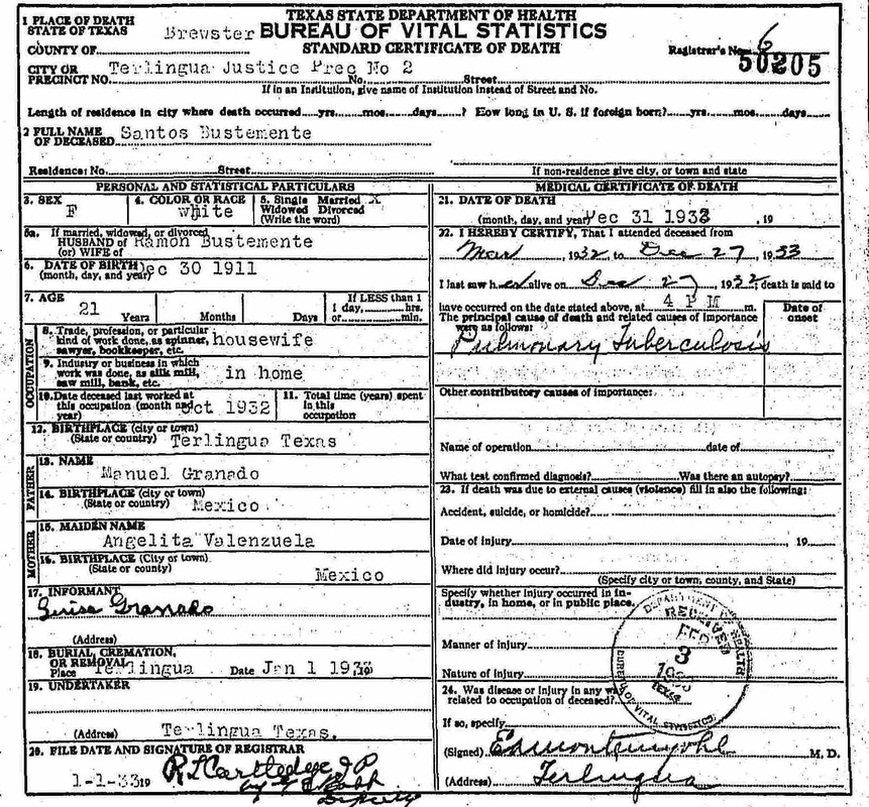 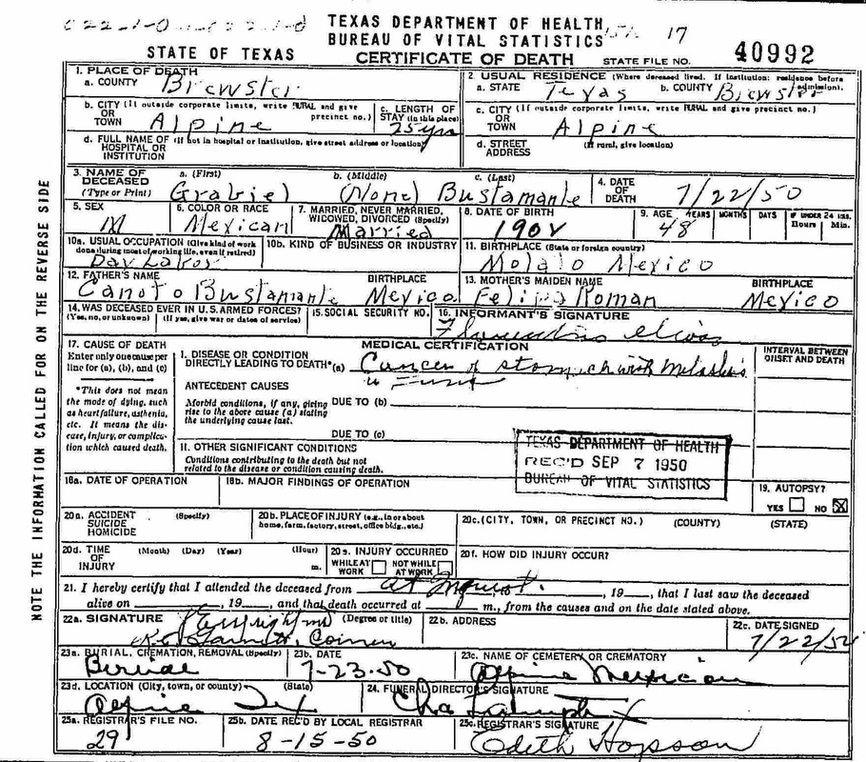 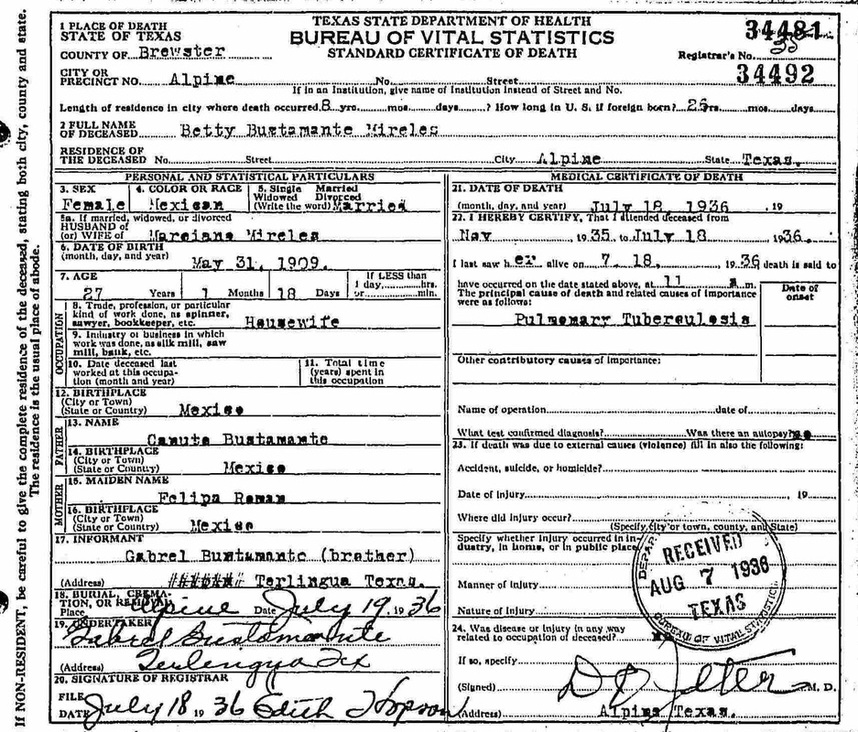 Mrs. Payne was born May 4, 1919, in Terlingua to Paulina and Manuel Bustamante. She had worked as a caregiver for many years. She was preceded in death by her husband Rockey Payne Sr.; one son, Rockey Payne Jr.; her parents; three brothers, Jesus, Jose and Daniel Bustamante; one sister, Genoveva Sanchez; and one great-great-grandson, Shon Beck.

Survivors include her friend and companion, Alejandro Sandate of Alpine; two sons, Manuel “Manny” Payne and wife Luisa of Alpine, and Larry Payne and wife Pam of Horizon City; two daughters, Nora Geron, and Susie Acosta and husband Erasmo, all of Pecos; five sisters, Eulalia Muniz of Alpine, Maria Espinoza and Ramona Fierro, both of Odessa, Ester Deleon of Lubbock and Mauricia Luna of Fort Worth; one brother, Rudy Bustamante of Alpine; one sister-in-law, Marta Bustamante of Odessa; 11 grandchildren; 21 great-grandchildren; five great-great-grandchildren; and numerous nieces and nephews.

Paulina Mireles Bustamante, 95 of Alpine died August 24 in a local hospital. She was born in Santa Eulalia, Chihuahua, Mexico and had lived in Alpine since 1925. She was a Catholic. She moved to Alpine from Terlingua where she had lived since she was 13. She married Manuel Bustamante June 4, 1918. He preceded her in death May 24, 1935.

Mass for Jose Muniz, 71 of Alpine was conducted at 10 a.m. Monday, October 20 at Our Lady of Peace Catholic Church with Rev. Beto Lopez officiating.

Burial was in Holy Angels Cemetery under the arrangements of Geeslin Funeral Home.

He was born in Terlingua on March 19, 1926 and moved to Alpine in 1942. He married Eulalia Bustamante on September 19, 1945 in Alpine. He worked for Southern Pacific Railroad for 13 years and as a contractor with Ralph Peters and Roy Stillwell.

Pallbearers were members of the Evening Lions Club of Alpine.

ODESSA Gilbert Espinoza, age 64, a long time resident of Odessa, left to be in the arms of our Savior to find rest after suffering a sudden illness. His departure was in the early hours of December 7, 2010.

Gilbert was the son of Manuel and Maria Espinoza. He was born in Alpine, Texas on November 30, 1946. He was a 1965 graduate of Ector High School where he was athletic and loved to play football for the "Mighty Ector Eagles."

Gilbert served our country as a sergeant in the U.S. Air Force and was in Vietnam during the war. Gilbert was a welder by trade and inspired many young men to pursue the trade of welding. In his spare time Gilbert coached numerous young people in the sport of baseball.

Gilbert was loved by many and was a very caring man who gave to those in need without hesitation. He had a free spirit and lived life to the fullest.

Gilbert was preceded in death by his father, Manuel Espinoza; and his son, Michael Espinoza, both of Odessa.

A Rosary service will be held at 7 p.m. Thursday, December 9, 2010, at Hubbard-Kelly Funeral Home. A mass will be celebrated at 2 p.m. Friday, December 10, at St Joseph Catholic Church with Father Mark Miller officiating. Interment will follow at Rose Hill Cemetery.

Gilbert may the angels be your guide as they welcome you into paradise.

ODESSA   Maria B. (Marie) Espinoza, 90, of Odessa passed away peacefully while surrounded by her family, Wednesday, August 24, 2011 at her residence. She was born February 2, 1921 in Terlingua, TX to Manuel & Paulina Bustamante. Maria was raised in Alpine, TX where she was educated and later married Manuel (Chito) Espinoza on July 8, 1939 and from this union they had four children whom they were very proud of.

Marie was an advocate of her community where she strongly believed in the freedom for all people and their right to vote. As a beautician she used her skills by providing her services to under privileged women and children. Her incredibly generous and strong spirit remained constant as she battled with Alzheimer's disease. Her example of determination and faith will live in all that she touched. She will be missed dearly.

A Rosary will be said at 7:00 p.m. Friday, August 26, 2011 at Hubbard-Kelly Funeral Home. Mass will be celebrated at 10 a.m. Saturday, August 27, 2011 at St. Joseph's Catholic Church with Father Patrick Akpanobong officiating. Interment will follow at Rose Hill Cemetery.

He was a Christian Catholic and worked in the Oil Field as a Welder. He was born on March 19,1974 in Odessa, Tx to Gilbert and Maria N. Espinoza. Mikey was a loving husband and father. He enjoyed fishing and spending time with friends and family. We will dearley miss him but we know he is no longer suffering and we know he is in a better place. He is preceeded in death by his Paternal Grandfather: Manuel Espinoza and Maternal Grandfather: Leandro Nabarrette. He is survived by his wife: Becky Castillo of Odessa, Tx, sons: Michael Ryan Espinoza, Tyler Lee Espinoza, Brandon Michael Sosa, Justin Zertuchie all of Odessa, Tx, daughters: Presley Dominguez, Karena Quiroz both of Odessa, Tx, parents: Gilbert Espinoza and Maria N. Espinoza both of Odessa, Tx, Paternal Grandmother: Maria Espinoza and Maternal Grandmother: Baselisa"Licha" Nabarrette both of Odessa, Tx, brothers: Gilbert Espinoza Jr., Gino Espinoza, Steven Cortez all of Odessa, Tx, sisters: Joann Cortez, Jill Espinoza both of Odessa, Tx. Pallbearers will be Chris Nabarrette, Michael Nabarrette, Ricky Tavarez, Jose Luis Urias, Alfonso Santillan, Randy Martinez. A rosary is set for Sunday October 14,2007 at 7:00 pm at Odessa Funeral Home Chapel. Mass will be celebrated on Monday October 15,2007 at 10:00 am at St. Joseph's Catholic Church with Rev. Mark Miller officiating. Burial will follow at Rose Hill Cemetery.

We the Family would like to thank Medical Center Hospital, Deerings Nursing Home, Home Hospice, and everyone else who took care of him.

We Love You Mikey, you will be missed.