Candido Luna, Sr. Family History
A Documented Research Report by Bob Wirt
Version 1, June 13th, 2011
Candido Luna, Sr. was born October 12, 1907 in Terlingua, the son of Alejandro Luna and Antonia Lujan Luna (see http://www.lifebeforetheruins.com/alejandro-luna.html )  He was baptized there by Father Brocardus May 4, 1908. His godparents were Dolores Duran and Guadalupe Luna. Candido married Manuela Luitt in Alpine November 4, 1935. They may have been married earlier in a civil ceremony. Manuela was born in Fort Stockton June 5, 1919 and was baptized there July 6, 1919. She was the daughter of Bernardo Martinez Luitt and Facunda Gallegos (see http://www.lifebeforetheruins.com/gabriel-gallegos.html). In her baptism record her name was shown as Manuela Martinez. Her godparents were Valente Prado and Maximiana Armendariz.
Candido died June 15, 1978 and is buried in the Seminole Cemetery. Manuela was living in Seminole in April 2011. 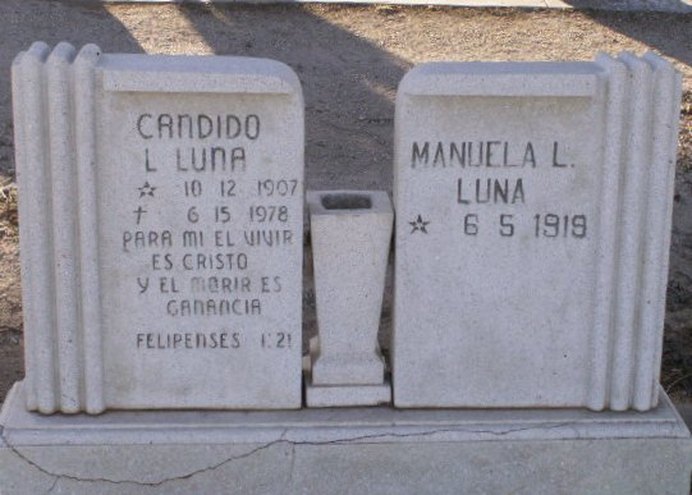 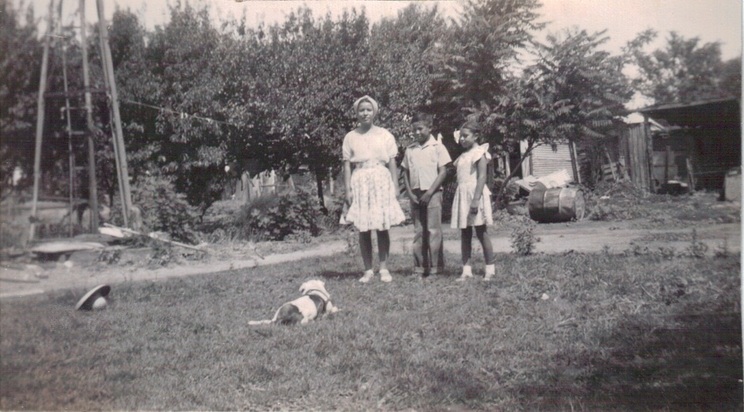 Candido Jr. visiting with friends Margarita (left) and Tina (right) Franco at the Franco home in Alpine. The Franco dog Skipper is in the foreground.
Photo provided by Louisa Franco Madrid (sister of Margarita and Tina).
Candido Jr. married Elidia Holguin in Alpine in 1953 and soon afterward moved to Seminole, where he worked as a laborer in the construction industry. Candido and Elidia had three children:

Candido Luna, Jr. later married Oralia Nanez, born March 20, 1932 in San Marcos, Texas. She was the daughter of Patricio Nanez and Julia Barron. She died in Seminole May 28, 2009 and is buried beside Candido, Jr. in the Gaines County Cemetery in Seminole. 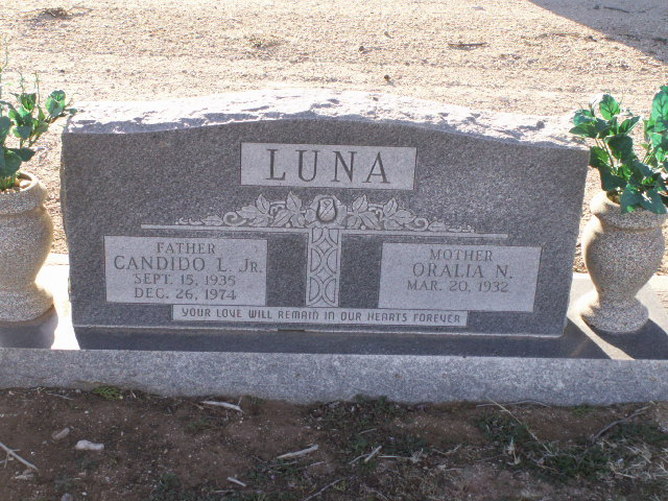 Candido and Oralia had four children:
A.   Son Adolfo Luna had one child with Maria Dolores Hermosillo.
(1)  Son Alexander Luna was born in Medical Arts Hospital, LaMesa, Texas September 2, 1985. He lived in Seminole until 1996 when he moved to Carlsbad, New Mexico, where he was living in 2011. He graduated from Carlsbad High School May 24, 2003. In 2007 he obtained his Emergency Medical Technician License and was working for the Carlsbad Fire Department. In 2011 he was enrolled in Eastern New Mexico University working on a degree in Emergency Medicine with the goal of obtaining a Paramedic License.

This work may not be copied or used in whole or part for publication without the written consent of the author.
Individuals may use this information freely to develop and maintain family histories for their personal use.