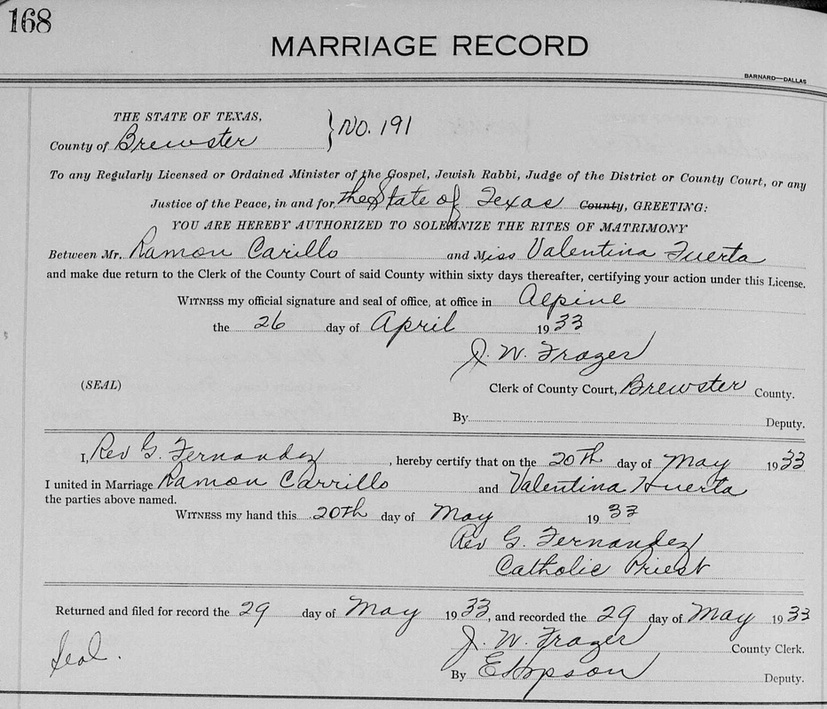 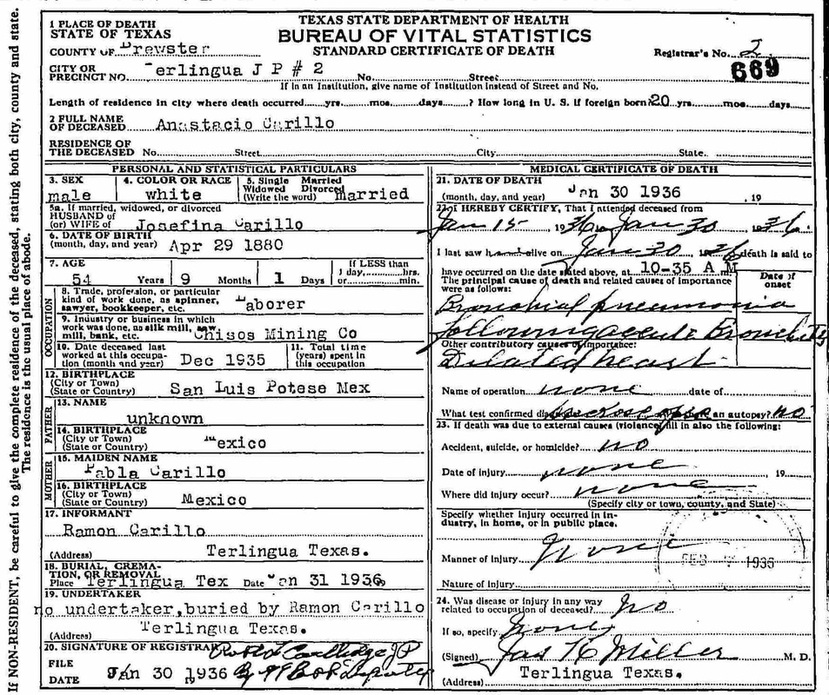 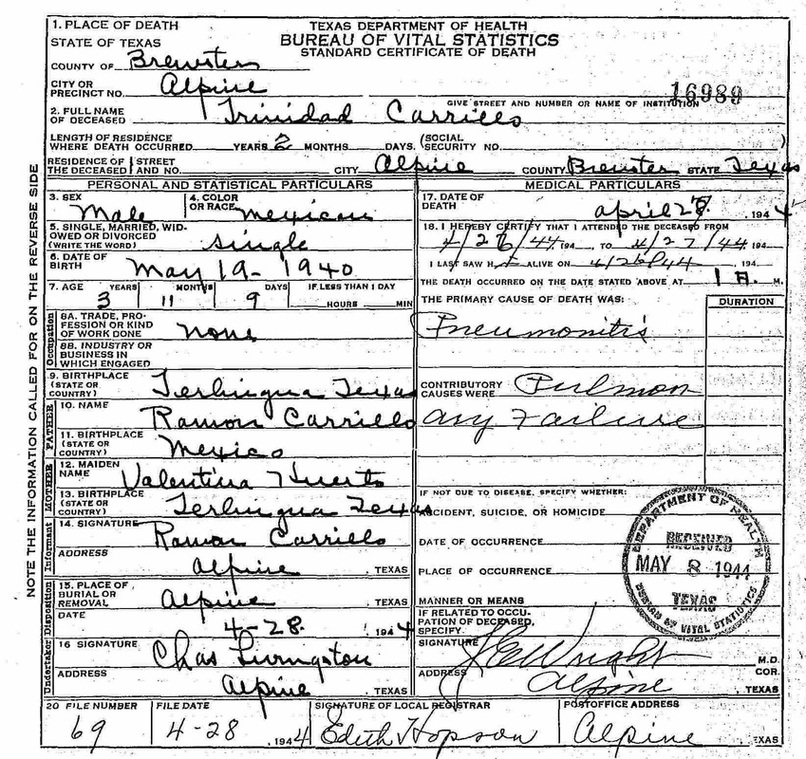 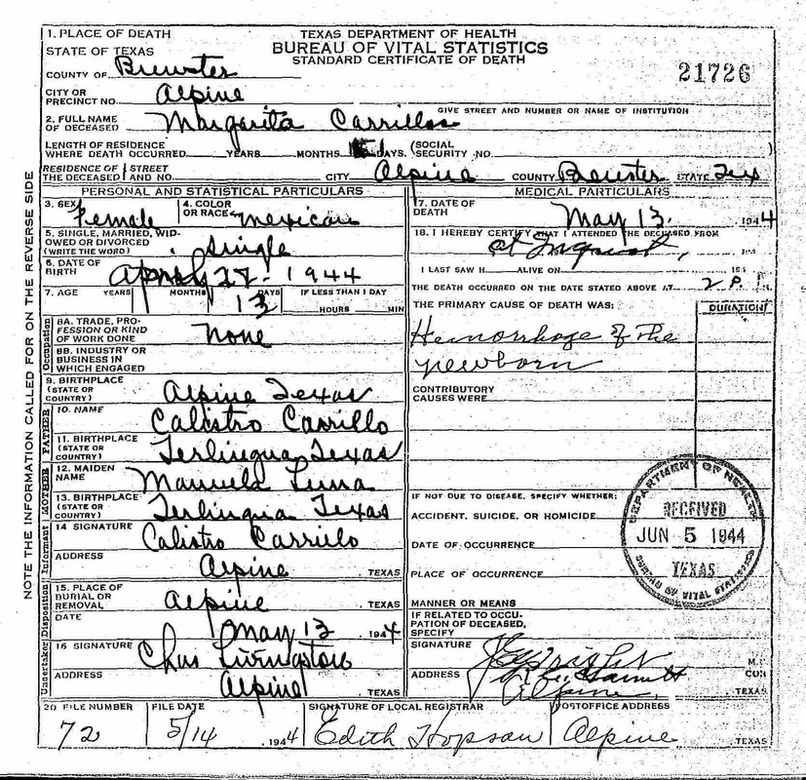 Rosary was Friday at 7:00 p.m., November 6, 1998 at Our Lady of Peace Catholic Church. Mass was held Saturday at 10:00 a.m. and burial followed at Holy Angels Cemetery. Arrangements were under the direction of Geeslin Funeral Home.

Luna was born in La Esmeralda, Coahuila, Mexico. She lived in Terlingua until her 20’s when she moved to Alpine. She had been with her husband, Demencio Luna over 53 years. She was a member of Our Lady of Peace Catholic Church and was a housewife and a homemaker. She was preceded in death by her parents, Anastario and Josefina Carrillo, and 3 brothers: Iniz, Estevan and Antonio Carrillo.

Ramon Carrillo, 92, died on July 16, 2001. He was born in Sierra Mojada, Coahilla, Mexico on September 11, 1909 to Anastacio and Josephina Carrillo. Rosary and Mass were celebrated at Our Lady of Peace Catholic Church with burial at Holy Angles Cemetery.

At age five he came to the United States. He married Valentina Huerta in Terlingua where they raised three children Juan H. Carrillo and Manuela C. Salas of Alpine and Trinidad Carrillo, who died at age five. He worked in the Terlingua, Study Butte, and Shafter mines from 1935 to 1941 and later worked for and retired from the railroad in 1973.

He is survived by his brothers Jacinto and Sabas Corrillo of Alpine, Calistro Carrillo of Odessa and a sister Jesusita Marques of El Paso. He was preceded in death by his son Trinidad, his wife Valentina Huerta Carrillo at age 37, brothers Antonio, Stephen, Inez and his sister Felipa Luna.

Angela Tavarez Carrillo of Alpine, died Friday, January 25, 2008, in El Paso Texas. She was 84 years old. She was born, July 29, 1923, in Shafter, Texas. Mrs. Angela Tavarez Carrillo at the age of five, moved to Alpine. Following the death of her parents, Canuto and Natividad Tavarez she arrived in Alpine, Texas, by wagon train, where she lived with relatives. She is survived by her husband, Jacinto Carrillo Sr. of Alpine, Texas, son; Jacinto Carrillo Jr., of Alpine, Texas, daughters; Flora Gonzales and husband, Nabor, Rosa Linda Bernal and husband Jesse of La Porte, Texas, Delma Sierra and husband Francisco of EL Paso. She is also survived by 12 grandchildren; 30 great grandchildren; and 12 great-great grandchildren. Her pallbearers were Jacob Jaquez, Jerome Cobos, Jason Carillo, Billy Cobos all of Alpine, Texas; Dennis Carrillo of EL Paso, Texas and Nabor Gonzales of Tempe, Arizona. Rosary services were held Tuesday, January 29, 2008, at 7:00 p.m. at Our Lady of Peace Catholic Church, Alpine Texas. Funeral services were held Wednesday, January 30, 2008, at Our Lady of Peace Catholic Church at 10:00 a.m. Interment was in Holy Angels Cemetery Alpine, Texas and officiated by Father Miguel Acuino.
She was preceded in death by her parents Canuto and Natividad Taverez, and brothers, Jesus Tavarez and Manuel Tavarez.

Arrangements were under the direction of Memorial Funeral Home of Fort Stockton, Texas.

Viewing will be from 1 to 5 p.m. Monday, Sept. 13, at Geeslin Chapel. Funeral Mass will be celebrated at 10 a.m. Tuesday, Sept. 14 at Our Lady of Peace Catholic Church with Father Mike Alcuino officiating. Burial will be at Holy Angels Cemetery directed by Alpine Memorial Funeral Home.

Mr. Carrillo was born Sept. 11, 1915, in Terlingua. He had worked as a laborer for the railroad for over 10 years. He was preceded in death by one sister, Felipa Luna, and brothers Ramon, Calixto, Sabas, Esteban, Antonio and Inez Carrillo.

Survivors include three daughters, Flora Gonzales of Alpine, Rosa Bernal of LaPorte and Delma Sierra of El Paso; one son, Jacinto Carrillo Jr. of Alpine; and one sister, Jesusita Carrillo of El Paso.

A homemaker who retired after 20 years as a restaurant cook, she was also a member of Our Lady of Peace Catholic Church in Alpine.

He was born June 21, 1945, in Alpine to Calistro and Manuela Carrillo.

He was employed as a carpenter in the maintenance department at Sul Ross State University in Alpine
for a time and also worked at several other part-time jobs. He was an Army veteran of the Vietnam War
and a Catholic.

He was preceded in death by his mother, Manuela L. Carrillo, and grandparents, Hilberto and Bonifacia
Luna and Anastacio and Josefina Carrillo.

Mass will be celebrated at 2 p.m. today, May 8, 2001, at St. Josephs Catholic Church with the Rev.
Gilbert Rodriguez officiating. Rosary was said at 7 p.m. Monday, May 7, 2001, at Odessa Funeral Home
Chapel.

Odessa – Calistro Llanez Carrillo, 88, passed away on Monday February 20th, 2006, at Medical Center Hospital in Odessa. He was born on October 14, 1917 in Terlingua to Anastascio and Josefina Carrillo. Mr. Carrillo worked for the Southern Pacific Railroad for over 30 years until he retired. He was married on November 12, 1936 to Manuela Luna and they cherished 63 years of marriage before she passed away in 2000. Mr. Carrillo was a loving father and family man and will be missed by his extensive family.

Mr. Carrillo was preceded in death by his parents, his wife as well as five brothers, Ramon and Sabas of Alpine, Antonio, Estevan and Inez of El Paso, Sister, Felipa Luna from Alpine and one son Luis of Odessa.

Rosary was said on Wednesday at 7 p.m. at Odessa Funeral Home Chapel. Mass will be celebrated at 10 am today at St. Joseph’s Catholic Church with the Rev. Joseph Uecker officiating. Burial will follow at Rose Hill Cemetery.

Funeral Mass was at 10 a.m. Monday, May 3, at Our Lady of Peace Catholic Church with Father Miguel Alcuino officiating. Burial was in Holy Angels Cemetery directed by Memorial Funeral Home of Fort Stockton.

Mrs. Carrillo was born June 16, 1921, in Alpine to Juana Valero Martinez and Juan Martinez. She married Sabas Carrillo Sr. on Oct. 23, 1939, in Alpine, and she was a Guadalupana. She was preceded in death by her husband; her parents; one daughter, Evangelina Carrillo; one son, Juan Jose Carrillo; three sisters, Margarita Garcia, Josefa Lopez and Aurora Rodriguez; and one brother, Herminio Martinez.

Mr. Carrillo was born on May 7, 1922 in Terlingua to Josephina Llanez and Anastacio Carrillo. Sabas was wed to Francisca Martinez on Oct. 28, 1939. He served his country during World War II as a member of the Navy. He had been employed as a laborer for the railroad and as a grave digger for Geeslin Funeral Home. Sabas was a member of the American Legion and the Catholic church. He was a life-long resident of Brewster County. Sabas was a loving and caring husband, father, grandfather, brother and friend who will be greatly missed.

Sabas was preceded in death by his parents and one son, Juan Jose Carrillo.