The Juan Urquieta Family History
A Documented Research Report by Bob Wirt
Version 2, Revised July 29, 2012
1. Daughter Luz Urquieta was born February 15, 1903 in Lajitas and was baptized there May 15, 1903 by Father Brocardus from St. Joseph’s Catholic Church in Fort Davis. Her godparents were Francisco Levario and Francisca Carrasco. She married Inez Perez in Terlingua April 22, 1923. He was born circa 1901 in Sierra Mojada, Coahuila, Mexico, the son of Pedro Perez and Basilia Hernandez. Inez worked as a mechanic for the Chisos Mining Company from 1925 at least until 1934. By 1943 Luz and Inez had moved to El Paso, where he worked as an operator for the Phelps Dodge Refining Co. Luz died of cancer April 17, 1951. On April 3, 1955 Inez died of injuries suffered in an automobile accident in El Paso. Both are buried in Evergreen Cemetery, El Paso.
Luz and Inez had three children:
A.    Daughter Balbina Perez was born in Terlingua March 29, 1925 and was living with her parents in Terlingua in 1930.
B.    Daughter Maria Grace Perez was born in Terlingua April 9, 1932. She was delivered by Chisos Mining Co. physician Dr. E.A. Montenyohl.
C.   Daughter Juana Perez was born in Terlingua June 25, 1933. She died of diphtheria in Terlingua May 22, 1934 and was buried in the Terlingua Cemetery the following day.
2.     Son Amado Urquieta was born in the Terlingua area September 5, 1906. He was baptized in Terlingua September 26, 1906 by Father Brocardus. His godparents were Sixto and Francisca Luna. In 1910 he was living with his parents in the Terlingua area. He died January 12, 1918 and is buried in the Terlingua Cemetery.

3.    Son Demencio Urquieta was born in the Terlingua area October 31, 1907. He was baptized in Lajitas May 1, 1908 by Father Brocardus. His godparents were Eligio Sanchez and Catarina Sosa. He was living in the Terlingua area with his parents in 1910 and 1920. In 1930 he was working as a laborer in the quicksilver mines. He married Juana Pardo January 31, 1934 in Brewster County.

4.    Son Manuel Urquieta was born in the Terlingua area April 19, 1909. He was baptized in Chisos by Father Brocardus May 11, 1909. His godparents were Isabel Vega and Francisca Alvarado. Manuel apparently died as a small child.

After the death of his first wife, Juan Urquieta married Mauricia Martinez in Terlingua on April 4, 1921. She was the daughter of Chon Martinez and Mauricia Vasquez. Juan and Mauricia continued to live in Terlingua until 1944, when they moved to Alpine. Their home in Alpine was on East Avenue F. Juan died in Alpine of bronchial pneumonia October 18, 1955. Mauricia died January 25, 1994 at the age of 104. Both are buried in Holy Angels Cemetery. Juan and Mauricia had nine children.

1.    Daughter Maria Urquieta was born circa 1922 in Terlingua. In 1930 she was living with her parents in Terlingua and in 1941 she was working as a sales person at the Chisos Mining Company Store. She married Daniel Molinar in Terlingua on July 12, 1941. He was born June 20, 1920 in Terlingua, the son of Paz Molinar and Maria Burgess. For more information on the Molinar family, see http://www.lifebeforetheruins.com/antonio-molinar.html 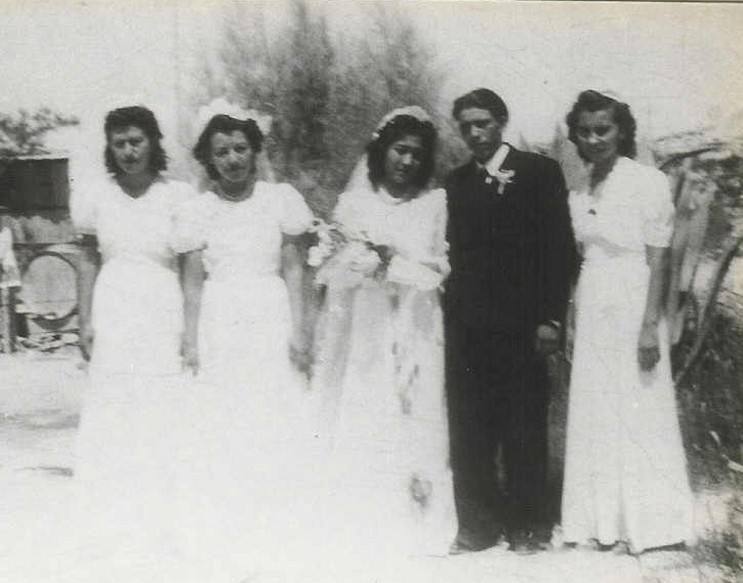 A.     Israel Ramirez Urquieta was born June 30, 1946 in Brewster County. He died February 9, 2001 in Odessa. He married Teresa de Jesus Chavira and they had five children:

B.    Daughter Erlinda Urquieta was born August 10, 1953 in Kermit. She died in Medical Center Hospital, Odessa of septicemia on May 5, 1954 and is buried in the Odessa Cemetery.

A.    Son Jimmy Urquieta Macias was born July 23, 1949 in Brewster County. In March 2012 he and his wife Debbie were living in Oracle, Arizona. They have two children:

D.   Daughter JoElda Macias was living in Apache Junction, Arizona in March 2012. She has one child:

4.    Daughter Andrea M. Urquieta was born 27 Apr 1928 in Terlingua. She married Trinidad Gomez Villalba. In January 1994 she was living in Seminole. Andrea and Trinidad had four children:

C.   Daughter Nelda Kathaline Villalba was born in Seminole July 23, 1956. She died of pneumonia in Alpine December 1, 1956 and is buried in Holy Angels Cemetery.

5.    Daughter Catalina Urquieta was born May 1, 1930 in Terlingua. On 29 June, 1958 she married Angel Bermudez, son of Merced Bermudez and Telesfora Morales. In January 1994 she was living in Alpine.

6.    Daughter Dolores Urquieta was born June 15, 1932 in Terlingua.  She was delivered by midwife Rosaria Mata. She married Benjamin Luna Rivera, son of Pablo Rivera and Rebecca Luna. He was born September 16, 1935 in Alpine. Benjamin died in Seminole January 9, 1993. Dolores was living in Seminole in January 1994. They had four children. (See http://www.lifebeforetheruins.com/alejandro-luna.html for details.)

8.    Daughter Hortencia Urquieta was born July 18, 1943in Brewster County. On July 11, 1970 she married Robert Rodriguez Cordova. He was born May 19, 1941 in Shafter, the son of Alfredo Cordova and Maria Rodriguez. Hortencia was living in Alpine in January 1994. She and Robert had five children:

Copyright  2011 by Bob Wirt; all rights reserved.
This work may not be copied or used in whole or part for publication without the written consent of the author.
Individuals may use this information freely to develop and maintain family histories for their personal use.