Jesus Garcia was born in Mexico in 1870, the son of Jesus Garcia and Maria de la Luz Herrera. He married Mariana Oliveres (a) February 13, 1888 in Jesus Nazareno Temple in Ojinaga, Chihuahua, Mexico. Mariana was born in Mexico in 1874 and was the daughter of Jose Oliveres and Canuta Ramirez and the great granddaughter of Marcos Ramirez. For more information on the Ramirez family, see http://www.lifebeforetheruins.com/marcos-ramirez.html .  In 1898 Jesus and Mariana and their first six children immigrated to the United States and by 1899 they had settled in the village of La Coyota, along the Rio Grande River about two miles west of Castolon, Texas. Jesus, son Pedro (age 12) and daughter Canuta (age 11) all were shown as “ranch laborers” in the 1900 census.

Most of the village of La Coyota was built around the eastern base of a mesa, but the Garcia home was on top of the mesa. It was alone there until just after the 1934 flood, when Ruperto Chavarria also built a house on the mesa top. One room of the Garcia home was large enough for an alter and was used for worship services by members of the community. Today nothing remains of the house except traces of the foundations.

Jesus engaged in farming, selling his excess produce to the La Harmonia Company in Castolon and probably to the mining communities in Terlingua and Study Butte. He also raised some sheep and goats, sold fuel wood to the mining companies, and hauled freight for local companies, including the Mex-Tex Wax Company (b). In the late 1920’s Jesus moved his family to Terlingua, but returned to La Coyota by 1930. He die﻿d in La Coyota January 6, 1934 and is buried in the La Coyota Cemetery. Mariana was living with son Victoriano in Alpine in March 1940. 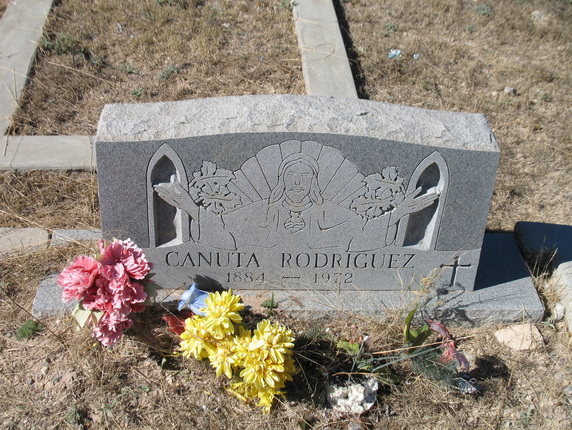 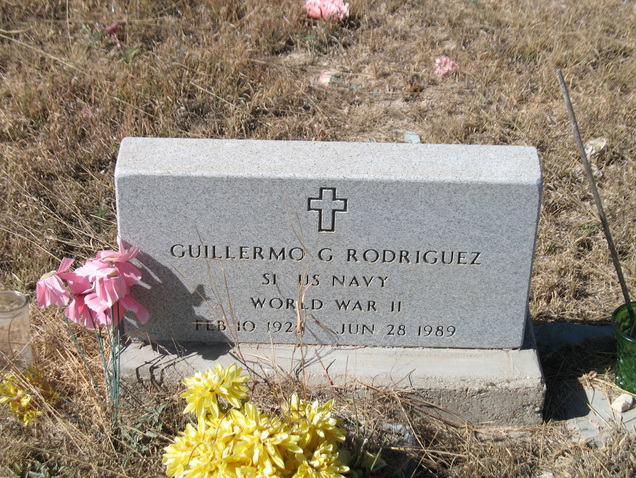 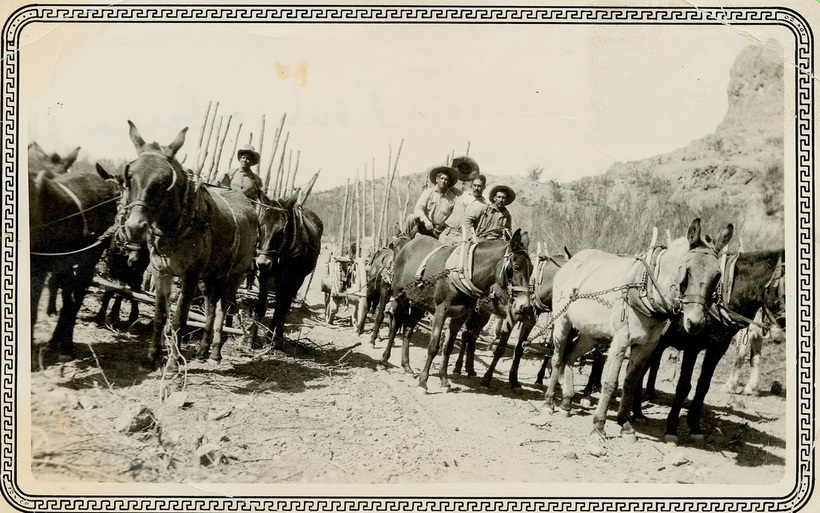 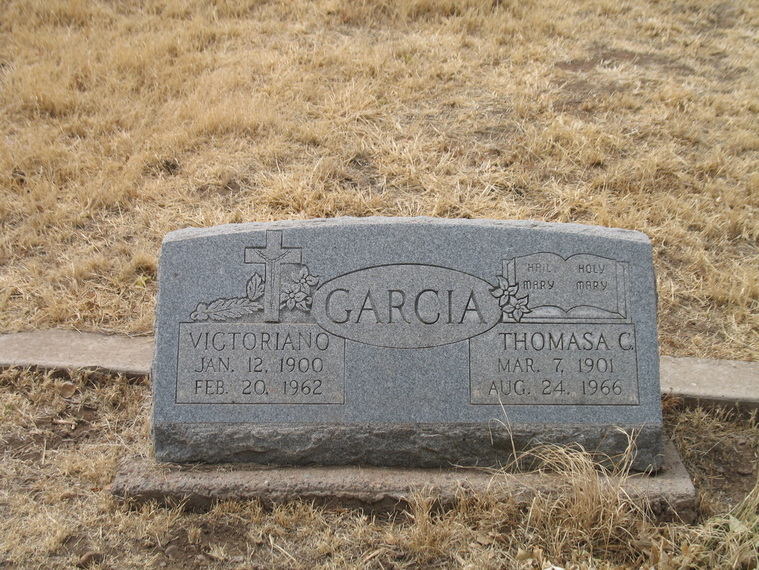 7.   Son Matilde Garcia was born in La Coyota May 20, 1901. He was baptized in Terlingua by Father Brocardus. His godparents were Simon Acosta and Marcelina Chavarria. In June and July 1917 he worked a total of 22 shifts as miner for the Study Butte Mining Company for $1.00 per shift. Later in life he worked as a ranch hand for various ranchers in the area, including Wayne Cartledge and Homer Wilson.

He married Teodora Granado January 6, 1928. She was born in San Vicente, Texas July 27, 1906, the daughter of Sostenes Granado and Trinidad Sanchez. She was baptized February 24, 1907 in San Vicente by Father Brocardus. Her godparents were Camilo Celaya and his wife, Ignacia Macias. (For more information on the Granado family, please see http://www.lifebeforetheruins.com/balbino-granado.html). Matilde died in Marathon April 6, 1982. A small marker on his grave reads “El Vaquero de los Chisos” (The cowboy of the Chisos). Teodora, “Ma Lola” as she was known later in life, died November 2, 2004. They are buried next to each other in the Marathon Cemetery. 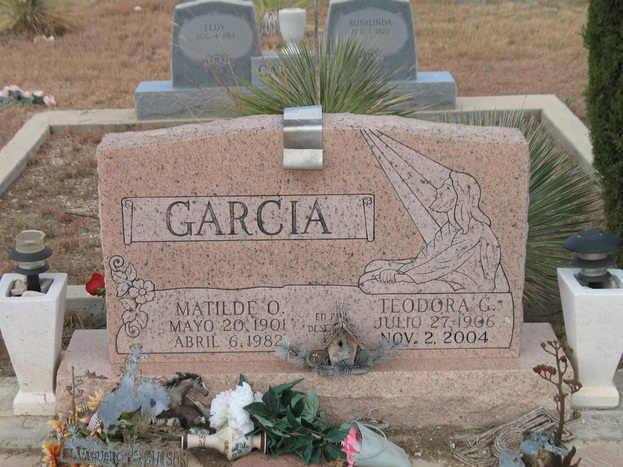 Matilde and Teodora had eight children:

A.   Daughter Sara Garcia was born in La Coyota December 17, 1928. She married Antonio Aguilar October 28, 1946 in Marathon. They were married by Justice of the Peace Virginia Young. Antonio died in Odessa February 11, 1986. Sara lived in Odessa until her death. She died August 3, 2012 in Hospice House in Odessa. They are buried in the Marathon Cemetery. Sara and Antonio had five children: 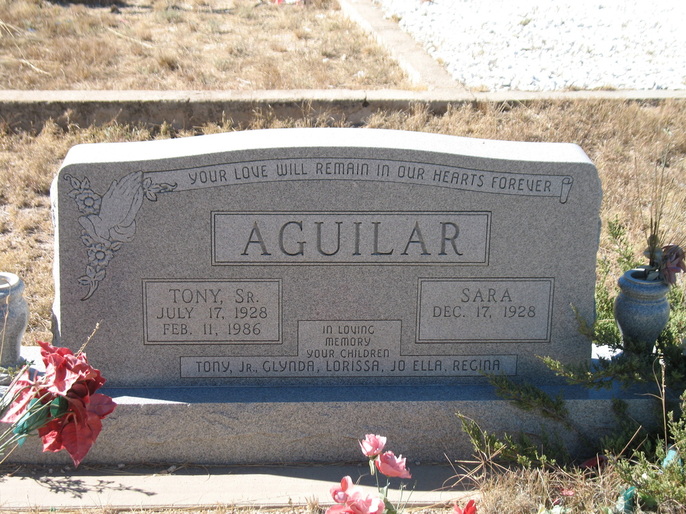 (3)  Daughter Lorissa Aguilar was born March 8, 1956 in Brewster County. She married Guadalupe Gonzales and in August 2012 they were living in Clint.

Jo Ella later married Michael Smart and in August 2012 they were living in Odessa.

C.   Daughter Cruz Guadalupe Garcia was born May 3, 1934 in Terlingua. She died in UMC Hospital, Lubbock August 2, 2007 and is buried in the Marathon Cemetery. Her longtime companion was Jesse Barriga. 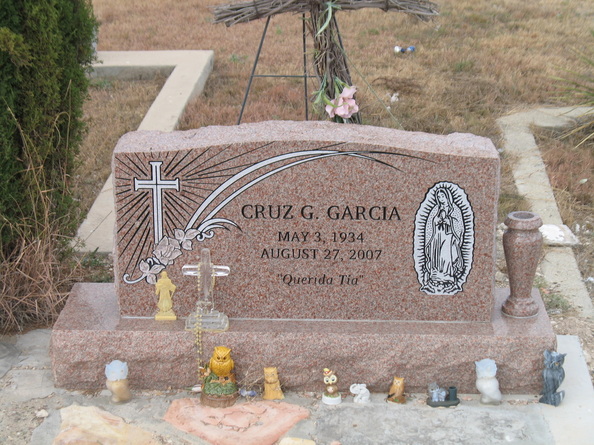 For a wedding gift, Tiburcio and Merced received four freight wagons from Merced’s parents. This undoubtedly helped get Tiburcio started as a freighter. In the last half of 1927, he hauled freight for the La Harmonia Company in Castolon, He made seven round trips to Alpine during this period, earning a total of $317.45. It normally took 10 to 14 days to make the round trip. Tiburcio was still working as a freight wagon driver in 1930, according to the census, but there are no indications that he worked for La Harmonia Company after 1927.

In the early 1930’s trucks began replacing mule-drawn wagons for hauling freight, which apparently forced Tiburcio to seek other employment. In 1936 he moved his family from La Coyota to Study Butte to work in the mines, in 1938 he moved to Alpine to work on a ranch, and soon afterward he moved to Marathon, where he worked as a section hand on the railroad. He also worked for Big Bend National Park around 1950, eventually retiring from the National Park Service. Merced died in Alpine September 13, 1997 and Tiburcio died October 20, 1987. They both are buried in the Marathon Cemetery.

Tiburcio and Merced had ten children:

B.  Son Ysidro Garcia was born May 15, 1929 in La Coyota. He attended school in Castolon, Study Butte, Terlingua and Marathon. In 1936 he moved with his family from La Coyota to Study Butte, In 1938 he moved with his family to Alpine, and soon afterward to Marathon. While in Marathon he worked for the W.R. Green Store stocking shelves and cleaning, and in 1947 he went to work for Big Bend National Park. Ysidro married Margarita Ornelas May 26, 1956. She was born in Presidio October 6, 1927, the daughter of Juan Ornelas and Francisca Carrasco. Ysidro and Margarita made their home in Presidio, where Margarita served as the Postmaster. Ysidro ranched and farmed about seven miles upriver from Presidio, where he grew cotton and hay. Ysidro was a U.S. Marine Corps Veteran with service in Korea.

Ysidro died in a traffic accident near Sotol Vista, in Big Bend National Park, on June 12, 1980 and is buried in the Marathon Cemetery. 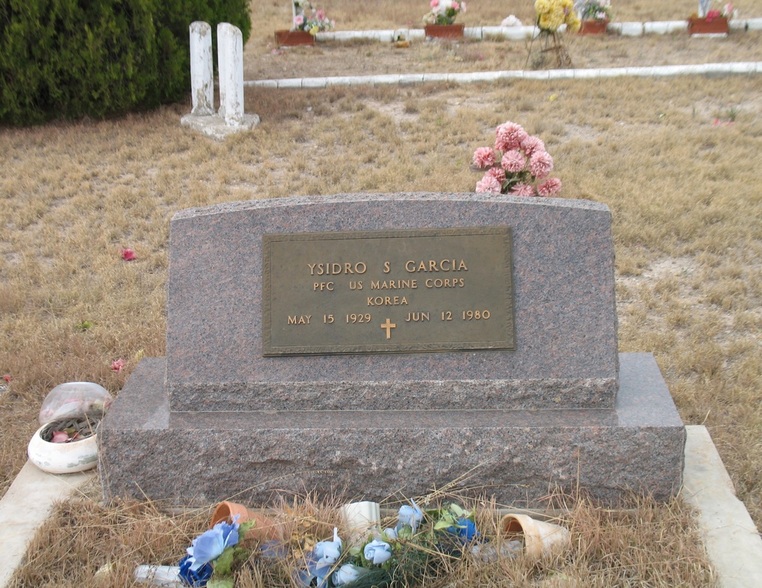 Ysidro and Margarita had four children:

C.   Son Domingo Garcia was born in Terlingua October 20, 1935. He died in Terlingua February 4, 1937 of bronchial pneumonia and is buried in the Terlingua Cemetery.

E.   Son Guadalupe Garcia was born May 16, 1940 in Marathon. He married Refugia Mimbela and in 2011 they were living in San Antonio.

F.   Daughter Carmel Lucia Garcia was born February 16, 1945. She was born a deaf mute. In 2011 she was living with Elva Ramos Diaz in Edmond, Oklahoma.

G.   Son Roberto Garcia was born November 4, 1951 in Marathon, the twin of Esperanza. He died there of pneumonia April 17, 1952 and is buried in the Marathon Cemetery.

H.    Daughter Esperanza Garcia was born November 4, 1951 in Marathon, the twin of Roberto. She was born with Down’s Syndrome and lived with her brother and guardian, Ezequiel Garcia in El Paso. She died in 2011.

I.   Son Agustin Garcia married Salome Ramos and in 2011 they were living in El Paso. He is the owner of Coronado Prime Meats. Agustin is a U.S. Military Veteran.

J.   Son Ezequiel Garcia was born in Marathon. His wife’s name is Lorina and in 2011 they were living in El Paso. He was the guardian for his sister, Esperanza, who died in 2011. Ezequiel is a U.S. Military Veteran.

9.    Daughter Placida Garcia was born in La Coyota October 5, 1905. She was baptized in Terlingua by Father Brocardus April 21, 1906. Her godparents were Severiano Chavarria and his wife, Rita Ramirez. She married Marcelo Dominguez October 3, 1925, probably in Terlingua. They were married by Father Julius Gremaud from St. Agnes Catholic Church in Terlingua and their witnesses were Francisco Ramirez and his sister, Andrea Ramirez, from La Coyota. Marcelo was born in July 1902 in Presidio, Texas, the son of Patricio Dominguez and Herlinda Olivas. In January 1929 Placida and Marcelo were living in the Lajitas area, but by March 1930 they had moved to Castolon. Marcelo worked as a ranch hand on cattle ranches in both areas.  By May 1940 Marcelo was deceased and Placida was living in La Coyota with their children. Placida died in San Jose, California September 18, 1993.
Placida and Marcelo had four children plus one adopted child:

A.  Son Nicolas Dominguez was born in Terlingua October 3, 1925.
He was living with his mother in La Coyota in May 1940.

C.   Daughter Eniberta Dominguez was born in Castolon 16 March 1930.
She was living in La Coyota with her mother in May 1940.

E.   Adopted Son Arturo (Moreno) Dominguez was born in 1939.
10.    Son Juan Garcia was born December 27, 1907 in La Coyota. He was baptized in Terlingua May 3, 1908 by Father Brocardus. His godparents were Severiano Chavarria and his wife, Rita Ramirez.
12.    Daughter Eniberta "Beta" Garcia was born in La Coyota March 16, 1912.  She married Antonio Almanza and by 1950 they were living in Monahans. They remained there until their deaths. Antonio died in Odessa July 9, 2000 and Beta died in Monahans February 20, 1912. Both are buried in Memorial Cemetery, Monahan. They had five children”

A.   Daughter Delma Almanza was born April 28, 1940 in Ward County, Texas. She married Antonio Acosta and in March 2012 they were living in Monahans. They had eight children:

(2)  Son Abel Acosta was born in Monahans July 2, 1960 and was living there in November 1967. He died November 16, 1967 of a gunshot wound to the head when he and another boy were playing with a gun and it accidently discharged. He is buried in Monahans Municipal Cemetery.

C.   Daughter Yolanda Almanza, twin of Salvador, was born January 31, 1945 in Ward County. In July 2007 she was living in Monahans. She married Jesus Montez Orosco. He was born November 30, 1937 in Ward County, the son of Cleofas Orosco and Maria Montez. Yolanda died in Monahans September 3, 2000 and Jesus died there October 3, 2007. Yolanda and Jesus had eight children:

D.   Son Leonel Almanza was born September 16, 1953 in Monahans. He died at his home in Monahans November 27, 1959 and is buried In the Monahans Memorial Cemetery.

E.   Son Bobby Almanza was born July 22, 1959 in Ward County. In February 2012 he was living in Monahans. He married Sylvia Ann Sotelo, born January 20, 1944. Her parents were Alberto Sotelo and Esperanza Bernard. See  http://www.lifebeforetheruins.com/victor-sotelo.html for more information on the Sotelo Family and http://www.lifebeforetheruins.com/henry-bernard.html for more information on the Bernard Family. Bobby and Sylvia Ann were living in Monahans in August 2011. They had four children, all born in Monahans:

13.    Son Inez Garcia was born circa 1915 in La Coyota. He married Manuela Fuentes in Terlingua May 11, 1936. They were married by Justice of the Peace Robert L. Cartledge. Inez and Manuela had six children:

(a). This name also appears as Oliver and Olivas.

(b). The Mex-Tex Wax Company operated a Candelilla wax plant and company store at Cerro Chino in the early 1920’s.

(c). Florencio’s obituary indicates he was born in Barcelona, Spain. However, his death record and census records all indicate he was born in Mexico.

(d). In the death record the burial place is shown as Castolon, which was the post office for La Coyota at that time.

(f). At the time of the wedding, the property was actually owned by James Sublett. Many local residents remembered it as the Steele Ranch because Leonides Steele lived there when they first arrived in the area.

Personal observations by the author.

Send your comments to Life Before the Ruins