A Documented Research Report by Bob Wirt
Version 4, November 25, 2011
Francisco Franco was born in July 1849 in Mexico. Circa 1877 he married Juana Molinar. She was born in November 1869 in Mexico, the daughter of Vicente Molinar and Petra Carrasco. She was the sister of Victoriano Molinar, who was the father of the Terlingua area Molinar families. In 1980 Francisco and Juana were living at Rancho del Alamo, in Presidio County, where Francisco was working as a laborer. In 1900 they probably were living in Polvo, where Francisco was working as a day laborer. Francisco and Juana had eight children:

1. Daughter Cruz Franco was born was born c 1878 in Texas and was living with the family at Rancho del Alamo, Presidio County in 1880. Cruz died sometime in the 1880’s. 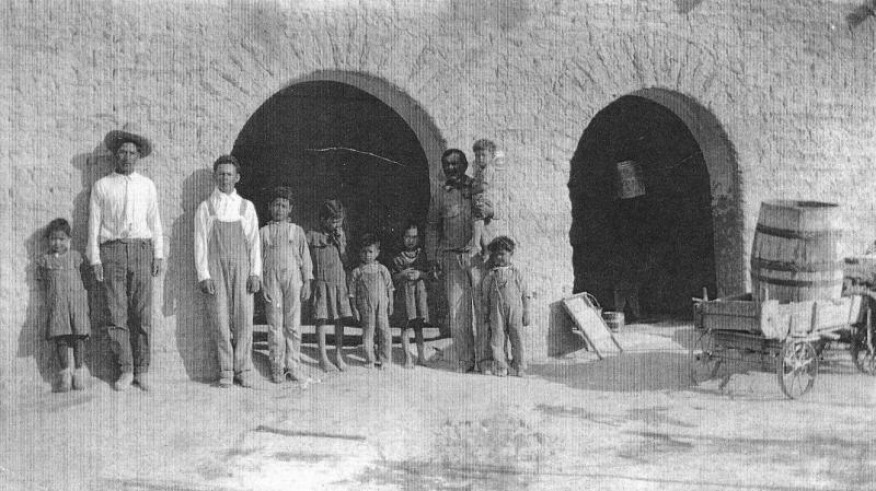 The Antonio Franco home in 1924, featuring a rare example of adobe arches in the Lower Big Bend.
Family members are, from left to right: Isabel, Benigno, Manuel, Secundino, Juanita, Roman, Rita, Antonio holding Simon, Florentino
Antonio’s primary source of income apparently was from freighting, but he also sold produce from his farm. The following is a summary of those activities. The activity with the Chisos Mining Co. is based on incomplete records and probably was much more extensive than shown. 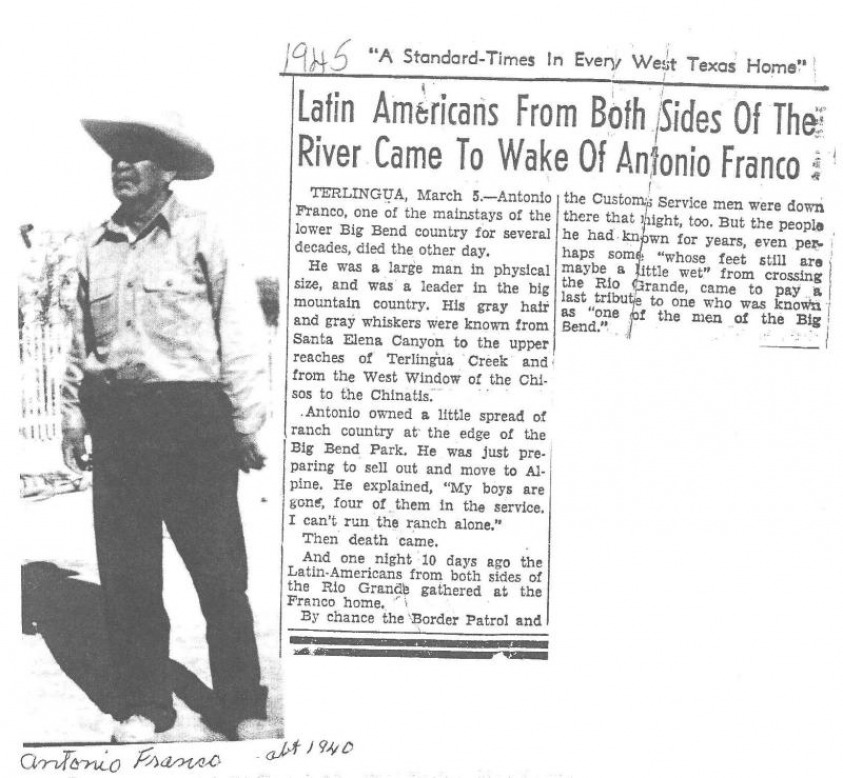 Antonio and Valentina had 12 children.
A.  Son Benigno “Ben” Franco was born in Terlingua 13 February 1908 and was baptized there on 3 May 1908 by Father Brocardus. His godparents were Ruperto Chavarria and Angelita Galindo. He married Natividad Garcia in Terlingua on 29 August 1931. She was the daughter of Dolores Garcia and Luisa Munoz.  She was born in Terlingua on 25 December 1908 and was baptized in Big Bend on 12 January 1909 by Father Brocardus. Her godparents were Felix Valenzuela and Josefa Baeza. Benigno and Natividad moved to Alpine in 1932 and to Carlsbad, New Mexico in 1948. Benigno died in Lakeview Christian Home in Carlsbad on 26 January 1999 and is buried in Santa Catarina Cemetery, Carlsbad. Natividad died at her residence in Carlsbad on 20 January 2005 and also is buried in Santa Catarina Cemetery. 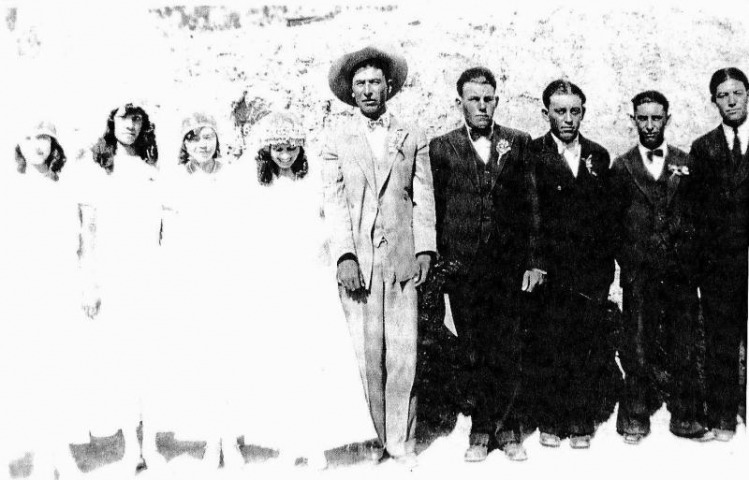 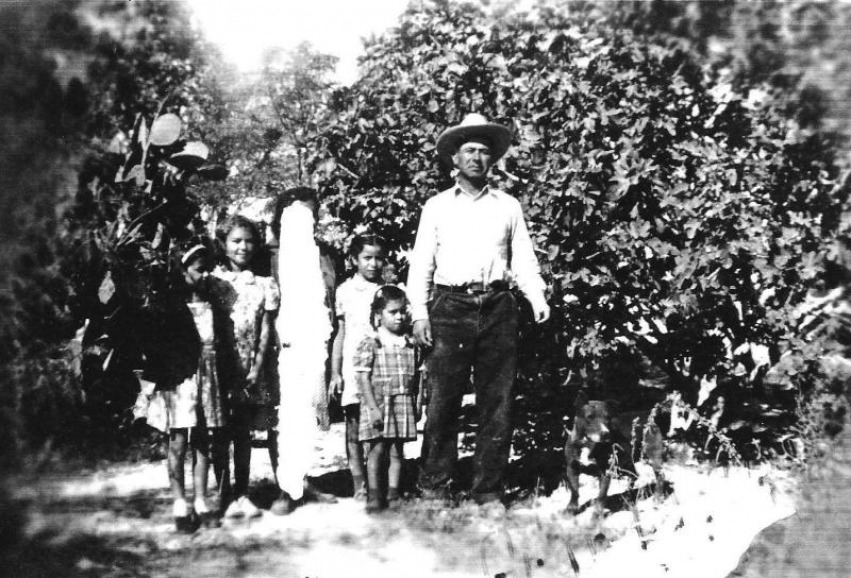 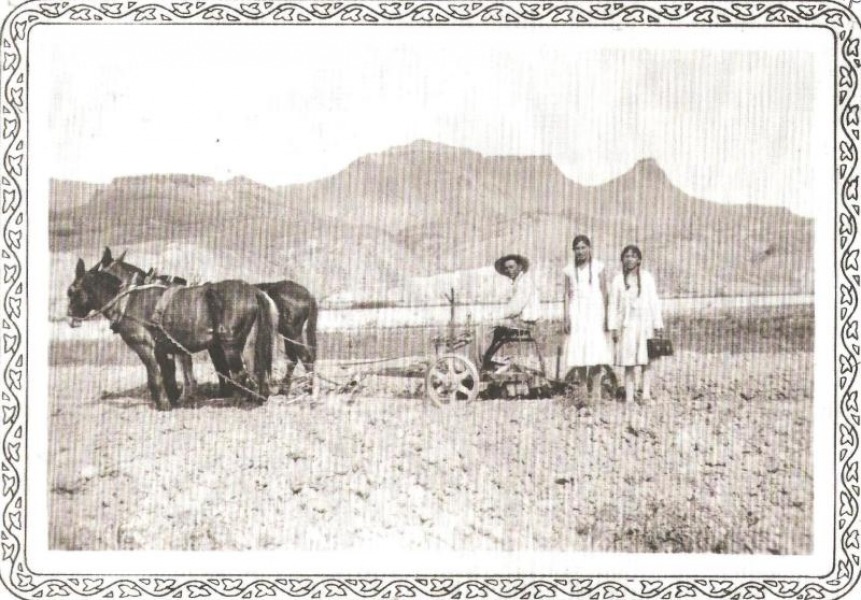 E. Daughter Juanita Franco was born 26 April 1916 in Terlingua. She was baptized in Chisos, Texas on 19 May 1916 by Father M. Cuadrado. Her Godparents were Sixto Chavarria and Maria Hinojos. She died on 2 February 2005 and is buried in Saint Joseph’s Catholic Cemetery, Fort Stockton.

F.  Daughter Isabel Franco was born 19 November 1917 in Terlingua. On 14 May 1944 she married Natividad Ybarra, son of Jose Ybarra and Cleofas Marquez. He was born on 25 December 1915 and was baptized in Chisos by Father M. Cuadrado on 30 Jul. 1916. His godparents were Victoriano Garcia and Mariana Oliveros. Isabel and Natividad lived in Presidio, Texas for some time before moving to Fort Stockton in 1948. She died in Odessa, Texas 30 December 1995 and is buried in Saint Joseph’s Catholic Cemetery, Fort Stockton. Natividad died in Fort Stockton 6 January 2007 and also is buried in Saint Joseph’s Cemetery. They had two children:
(1).  Son Natividad F. Ybarra, Jr. was living in Elsa, Texas in January 1996.
(2). Daughter Maria Concepcion “Connie” Ybarra was living in Fort Stockton in January 1996.
G. Daughter Rita Franco was born 19 April 1919 in Terlingua. She married Juan Sanchez and they lived in Fort Stockton. They had no children. Rita died 23 May 2011 in Pecos County Memorial Hospital, Fort Stockton and was buried in St. Joseph’s Cemetery, Fort Stockton.

6. Daughter Maria Franco was born in Texas on 5 Feb. 1894 and was baptized by Father Brocardus in El Indio, Presidio County, Texas on 19 March 1894. Her godparents were Pablo Rodriguez and Teodora Ornelas. She married Roy Loyless. He was born in San Antonio, Texas 22 March 1892 and died in Huston 14 August 1974. He worked as a marine mechanical engineer. They had five children:
A. Daughter Laura Loyless.
B. Son Roy Loyless, Jr.
C. Son Henry Loyless.
D. Daughter Irene Loyless.
E. Son Robert Hardin Loyless was born 5 April 1929. He died 30 Jul.2003.
More information on this family can be found at http://www.familiasdeterlingua.com/loyless---harden.html

D. Daughter Rita Franco was born in Texas circa 1927. In October 2011 she and her husband Pete Aboytes were living in Rankin, Texas.

F. Daughter Alicia Franco was born in Terlingua 26 December 1931. In October 2011 she and her husband Greg Garcia were living in El Paso.

G. Daughter Catarina “Cata” Franco was born in Brewster County 5 March 1934. She and her husband Brigido Esparza were living in Rankin, Texas in October 2011.

8. Son Francisco Franco, Jr. was born 2 July 1899 in Texas. According to his death record he worked as a miner. On 3 April 1943 he married Tomasa Hinojos in Alpine. They were married by Justice of the Peace R.C. Garnett. Tomasa was the daughter of Macario Hinojos and Severiana Alvarado of Lajitas. Prior to her marriage to Francisco, she was married to Julio Martinez. (For details and more information on the Hinojos family, please see http://www.lifebeforetheruins.com/macario-hinojos.html). Francisco served in the U.S. Army during World War II. He died in Providence Memorial Hospital, El Paso, of bladder cancer on 21 November, 1968. A resident of Alpine at the time of his death, he is buried in Holy Angels Cemetery in Alpine. Tomasa died 3 November 1978, probably in Alpine and also is buried in Holy Angels Cemetery. They had five children:

E. Daughter Margarita “Margie” Franco was born 14 Apr. 1956 in Brewster County. In Sep.2005 she was living in Globe, Arizona. Her married name is Urquidez.