A Documented Research Report by Bob Wirt
Version 3, Revised March 9, 2012
Anastacio Carrillo was born April 29, 1880 in San Luis Potosi. His mother was Pabla Carrillo but his father’s name is not available. He married Josefina Llanez circa 1908. She was born circa 1893 in Sierra Mojada, Coahuila, Mexico, the daughter of Patricio Llanez and Isabel Navarro. Anastacio and Josefina lived in Sierra Mojada and La Esmeralda, Coahuila before immigrating to the United States around 1915. By October 1916 Anastacio was working for the Chisos Mining Company and continued working for that company into 1935. He died of bronchial pneumonia January 30, 1936 and was buried the following day by his son Ramon in the Terlingua Cemetery. 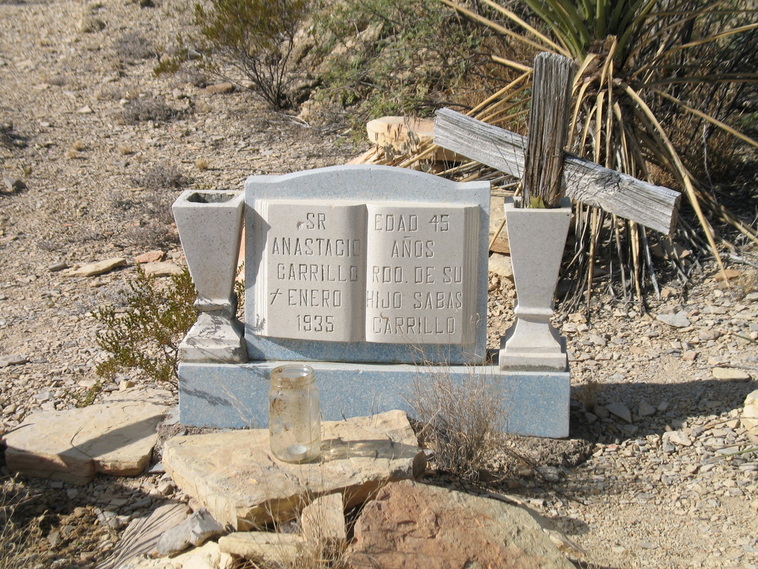 Anastacio and Josefina had nine children:

3.       Son Jacinto Carrillo, Sr. was born in Terlingua shortly after the family arrived from Mexico. By 1934 he was working for the Chisos Mining Company. In May 1934 he injured a finger on an ore bucket and the fingernail had to be removed. He missed work for eight days. Circa 1940 he married Angela Tavarez, probably in Alpine. She was the daughter of Canuto and Natividad Tavarez. Angela was born in Shafter July 29, 1923 and moved to Alpine with her family circa 1928. Angela died in El Paso January 25, 2008 and Jacinto died in Select Specialty Hospital in Midland September 8, 2010. Both are buried in Holy Angels Cemetery. Jacinto and Angela had four children:
A.      Daughter Flora Carrillo was born November 24, 1943, probably in Alpine. She married Nabor Gonzales and in September 2010 they were living in Alpine.
B.     Son  Jacinto Carrillo, Jr. was born in Alpine April 18, 1946. He married Maria Elena Valenzuela, daughter of Jesus Valenzuela and Isabel Espinosa. Maria Elena was born April 24, 1946 in Presidio County. Jacinto and Maria Elena divorced and she married Cornelius Ford May 28, 1990. She was living in Marfa in September 2012 and Jacinto was living in El Paso. Jacinto and Maria Elena had three children:
a.    Daughter Mary Alice Carrillo was born in Brewster County October 31, 1967. In September 2012 she was living in Washington, D.C. She married Benjamin Madrid May 31, 1987 in Presidio County.
b.    Son Dennis Valenzuela Carrillo was born February 7, 1970 in Alpine. He died in El Paso September 12, 2012 and is buried in Holy Angels Cemetery in Alpine. (Click here to see his obituary).
c.    Son Jason Duane Carrillo was born December 9, 1975 in Brewster County. In September 2012 he was living in Alpine.

C.     Daughter Rosa Linda Carrillo was born February 9, 1952 in Brewster County. She married Jesse Bernal and in September 2010 they were living in La Porte, Texas.
D.      Daughter Delma Carrillo married Francisco Sierra and in September 2010 they were living in El Paso.
4.       Son Calistro Carrillo was born August 14, 1917 in Chisos (a) and was baptized there November 3, 1917 by Father Antonio Alonso from St. Agnes Catholic Church in Terlingua. His godparents were Mario Llanez and Estefana Gonzalez. By 1934 Calistro was working for the Chisos Mining Co. and probably continued to work for the company at least through 1936. On November 11, 1936 he married Manuela Luna in Terlingua. She was the daughter of Gilberto Luna and Bonifacia Lujan and sister of Felipa’s husband Demencio Luna. According to her obituary, Manuela was born November 11, 1918 in Santa Helena, Texas (later Castolon, Texas).

(a)    Although the town surrounding the Chisos Mine officially became Terlingua when the post office moved the from the Mariposa Mine around 1909, church records continued to refer to the town as “Chisos” for many years afterward. This probably was because St. Agnes Church also was known as the “Chisos Mission”.

Copyright 2011 by Bob Wirt; all rights reserved.
This work may not be copied or used in whole or part for publication without the written consent of the author.
Individuals may use this information freely to develop and maintain family histories for their personal use.